Did you know that in early North Carolina divorce was officially granted through petition to and by an act by our state’s General Assembly? The contract of marriage is serious business, but what’s that got to do with Canada? In this post I’ll share two divorce cases with the first being considered by many the most humorous document housed at the North Carolina State Archives. Originating in now Stanly County, I gleaned the second case while tracing a petition related to the sales of land in support of the University of North Carolina. You’ll note that both petitioners blamed their woes in part on Canada. Let’s get to it and look out in the future for a post on the stand of a group of Stanly County citizens taken in connection to the creation of UNC.

During the 1990‘s, Ms. Grace Turner, my friend and mentor, motioned for me to take a look at a document she had at her table. It was a Saturday and we weekend history warriors were armed with pencils, pockets of quarters, and master lists of all we hoped to search. Ready to burst out in tear provoking laughter, Grace was most eager to show me a record she had discovered while methodically exploring boxes of loose Secretary of State papers. Her excitement was over the divorce petition of John Oquin who lived in Wayne County NC. Occurring in Wilmington some eight to ten years prior to 1812, the petition details events as follows:

“…while in company of sundry others who were supposed to spend the evening in a convivial manner ( after having recourse to the inebriating liquors, as an impetus to the actions) repaired to a House in the Town where the occupants were of the female sex, and notorious for their prostitution.

Your petitioner being then in the prime of life, and a disposition rather volatile –he did not hesitate to become one of the company, and expatiated freely on the subject of matrimony; —He did not believe that any scandal would result from such conduct, as a Justice of the Peace was in company with him; -and as his sole object was, – the acquisition of knowledge to enable him the better to discriminate; between women of virtuous and vicious habits.

But a short time had elapsed, before the inebriating liquors proved absolutely predominant; and your petitioner became utterly insensible of the transactions of the night.

In the morning when he awoke, to his inexpressible mortification, there lay by his side a Huge Mass of Creation, purporting to be of the female sex, who called herself Mary Jackson; —whose uncouth appearance indicated that she was formed by nature in a rude and ranting frolic –and whose touch along was amply sufficient to recoil the feelings of the most profligate wretch in society.
[your petitioner] hastily arose from bed, and inquired into her intrusion upon his repose: when he was informed that a Justice of the Peace who was in company in a fit of intoxication had joined them together as man and wife, and at a time when your petitioner was utterly insensible of the whole transaction – upon this information he precipitately retired, with pungent feelings of grief; and Alas!, when too late protested against the proceedings of that fatal night.

This fortuitous occurrence has proved as destructive to the repose of your petitioner, and has excited as much consternation among his friends; as was experience by the Trojans; upon the introduction of the Grecian Horse into Troy.!  Your petitioner further states that he is firmly impressed with the belief that if none of the fair sex, were ornamented with features and forms more enchanting; than this Mary Jackson; procreation would certainly cease, and be forgotten. Your petitioner further states, that the said Mary Jackson has gone off as a prostitute to Canada with the troops of the United States; -and it, as reasonable an expectation, that a camel can go through the eye of a needle; or the leopard can change his skin; as to believe that the said Mary, and your petitioner will ever dwell together –and as other moral and civil institutions require that all contract (if obligatory) should be entered into, with the free and full consent of both parties; He prays the interposition of your Honorable Body in his behalf; and hopes that the marriage aforesaid may be absolutely abrogated by an act of your Honorable Body…”

It’s one thing to read a typed copy of such old records, it’s yet another to hold such in your hand or at least to lay eyes upon it …especially in the quietness of the research room at our archives! To see the words as were written, and to engage the spirit the writer must surely have felt; all our senses are gifted by the experience of this petitioner’s wicked ability to tell a story. None of it can be made more real without actually being with John Oquin during his dreadful time in Wilmington. And now, let’s look at the petition that reached the General Assembly from western North Carolina on behalf of Catherine Dick. Her petition is a little less exciting, though much more revealing of the legacy she left in old Montgomery County. Before moving forward, here’s the petition for your own perusal. 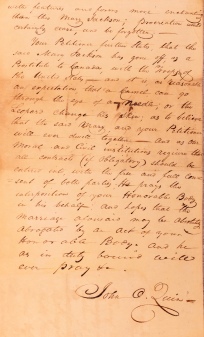 For the year 1799, several petitions appear in a folder containing sub-committee papers housed within the loose records of the General Assembly. The petitions were signed by citizens who all lived upon Bear and Long Creeks in Montgomery, now Stanly County. The petitions were signed in protest of the reversion of unsold land within the bounds of what’s known as the great tracts. Profit from the sales benefited the newly created University of North Carolina.

Going back a bit earlier, in Jan 1796, a survey of land on Bear Creek was made on behalf of Catherine Dick. Next, in Mar 1797, Catherine paid 20 pounds to Thomas Lowder for what appears to be the same acreage. Two years later, being 1799, Catherine Dick petitioned the General Assembly for relief from her unfortunate marriage to Joseph Dick. Catherine’s 1799 petition is stored alongside the above petitions raised by her neighbors concerning the sale of nearby lands in support of UNC. They were all read by and stored within the same General Assembly sub-committee folder. This fact is no coincidence and tells me that Catherine Dick’s issue was likely brought to justice at the same time and by the same person who handled the petitions concerning land and UNC.

“having been so unfortunate to marry Joseph Dick, a peddler from Canada, and by birth a French man, who by foolish trading, brought distress and ruin upon his poor family, so, that everything [has] been taken from us by the constables, and after that my said husband deserted me the first time the 22nd Dec. 1787 and the second time for good and all in April 1790 and since I heard nothing, of him anymore. I took therefore the resolution to begin at a new to acquire a small maintenance for me and my little son John, which I attained by sore work and frugality, but grown old and weak, I need it now very much and live in constant fear, my husband might take from me again what little I have saved;

I beg, therefore most humbly the General Assembly may favour me with the privilege of enjoying the fruits of my labour and secure my small estate to myself free from any and all claims of my dissipating husband …”

Signed by Catherine (x) Dick on 13 Nov 1799, the petition was witnessed by several Dutchman whose handwriting I cannot read (see document). Also signing in agreement with the petition are (in German), Thomas (+) Almond, Tobias Theoppilus Lattor, John Mainor, Elisha (X) Honnicut, Sharod Rowland, Jacob Milder, (in German).  And, here’s a copy of Catherine’s petition and signatures for your perusal: 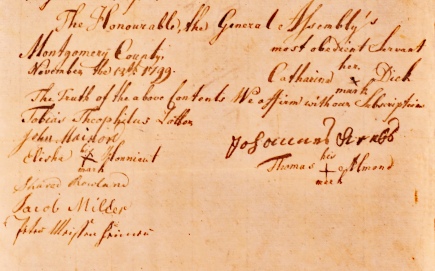 Unlike the first, this latter petition has consequences I better understand. And, it all happened in the neighborhood of my ancestors. I learned a little more about Catherine though her son John whose family became tightly woven into fabric of today’s southwest Stanly County.

John Dick, the son of Joseph and Catherine Dick, owned land in the area of Bear Creek and Ramsey’s Branch adjoining the Burris family and others. This land owner is surely the same John Dick who married Martha Hathcock, the daughter of Benjamin. Following John Dick’s assumed death ca. 1820, his widow Martha married second the colorful William (Uncle Billy) Whitley who is believed to have lived to the age of 115 years. Both Martha and William Whitley are buried in a family cemetery off of Garmon Mill Road.

The children of John Dick and Martha Hathcock are:

Looking back in time, I ponder the path taken from France by the elder Catherine’s husband Joseph Dick. Did he move south alone and by himself? Did he have family nearby? There is a John Dick who lived and died in Orange County North Carolina. Items sold at his 1792 estate sale looks like what might be found in a store or on a peddler’s wagon. Could this John be the father of Joseph Dick? This story needs further exploration