History appearing on the town’s website tells of early settlers, the civil war, and reconstruction. Though all of these things were important in establishing the local population, the town of Marshville NC did not exist until the coming of the train in the 1870’s. The town was named for Mr. and Mrs. J. W. Marsh who donated land for both a Baptist church and the first town hall.

Who is the Marsh Family? Some have them going back to a Thomas and Eunice Lathorpe Marsh who lived and died in Connecticut. Their children are believed to be Ebenezer, John, Solomon, and Thomas Marsh Junior. 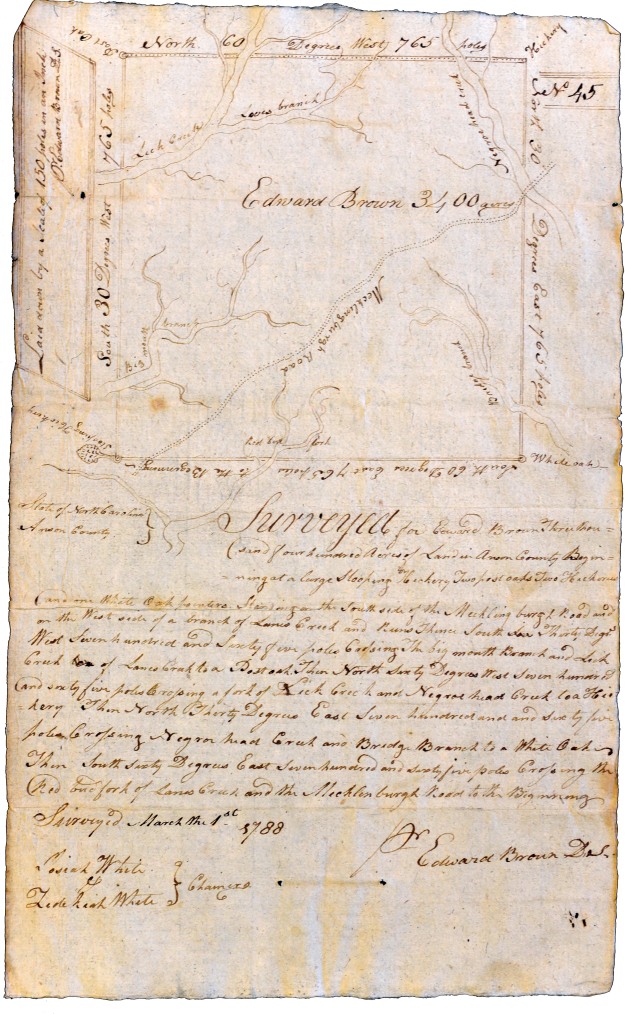 I’ve not researched this family much, but find it interesting that in the 1790’s Thomas Marsh (of Anson NC) and wife Elizabeth sold land on Caldwell Creek (Deed 1-2, Cabarrus NC). The transaction was witnessed by Ebenezer and Solomon Marsh. And, Ebenezer sold three tracts including land near Midland as well as land on the east bank of Rocky River and on Little Meadow Creek near what became Reed gold mine. Thomas Marsh purchased land along Lane’s Creek in Anson County early in the 1790’s. His brothers made the move there by century’s end. Also making the move from Cabarrus was Malachi Watts, Ebenezer Marsh’s next door neighbor on Little Meadow Creek.

Back to Marshville, the official history offers little prior to the town’s creation. This may change as I recently came across an unusually large land grant which will surely add to the story. Entered in Aug 1784, Edward Brown was issued a land grant of 3400 acres spanning the Big Mouth Branch and Lick Branch on Lane’s Creek to Negrohead Creek along with its tributary called the Bridge Branch. From the survey made in 1788, Edward Brown likely surveyed his own land as he initialed D.S, meaning deputy surveyor. Josiah and Zedekiah White served as chainbearers.

I’d love to learn more about Edward Brown. Is he related to the Brown family out of Maryland? Is he the same Edward Brown who is said to have been a Baptist preacher in the area of Crooked Creek? Also, about the survey plat, note that the Mecklenburg Road runs through the tract.

The streams drawn in the above makes it easy to locate this land. Below, I’ve oriented and overlaid the plat to a present road map. It fits though I could easily be off a bit here and there. Also, note that Lawyers Road cuts across the plat east to west. This is likely the Mecklenburg Road that Edward Brown located in his 1788 survey.

This is all a rough draft and I’m sure it needs to be looked at more closely. There are also land deeds showing how the supersized grant was divided up. And, there’s a need to understand more about this first generation of settler who lived on land we now call Marshville.