Working with land records, it amazes me how everyday new parts to a story are pieced together and yet each added parcel has the power to change the very core of the story already being told.

I was recently given a package of documents including the above land grant entry in the name of Solomon Burris. Made on March 5 for 100 acres, the land requested was situated on the waters of Stony Run. Normally, when applying to receive a land grant, the entry is written chronologically into a book containing successive requests by others. Each entry is identified sequentially by a distinct entry number. On the other hand, not copied from a book, what I see above has no entry number and appears to be written on a slip of paper. Note that both the county and year are missing. This is not normal! What is this and where did the record come from???!!!

Visiting NC Archives, I looked through the entry books for both Montgomery and Stanly counties where I found no mention of Solomon Burris entering land on Stony Run. At that point I realized for certain that the information on the slip of paper was never officially recorded in the county entry book. Though the writing is entry related, my question remains. What exactly is it? Given to me as a mysterious entry written on a slip of paper, I have no answer as to the record’s origin.

Entered 8 Mar 1836, John Honeycutt was issued 100 acres on 2 Mar 1838 (Grant 2786, Montgomery). From the official order to the surveyor, the land is described as being “one hundred acres for John Honeycutt adjoining George Cagle and Solomon’s Burris’ lines on the drains of Stony Run.” The statement corroborates what’s written above on Solomon’s entry. However, though mentioned in the entry, the actual survey for Honeycutt’s land (below) does not appear in the survey.

Even though I don’t know its source, the entry of Solomon Burris provides a very important clue as to the location of Solomon’s land …but, which Solomon? Publishing my thoughts online, it didn’t take long for Burris family historian Brenda Combs to point out a very real concern. As for Solomon, Brenda alerted me to the dilemma that there was a Solomon Burris Senior as well as his son Solomon Burris Junior. Knowing from the slip that the land in the entry adjoined that of John Honeycutt, it’s also important to know that both Senior and Junior were alive when “Solomon” was named in John Honeycutt’s 1836 grant survey. The above could be attributed to either Solomon Senior or Junior. Regardless of who Solomon is, from the limited information provided in the above entry, is it possible to physically discern the location of the entry? Can we trace its history? Can we determine which Solomon requested the land grant on Stony Run?

I love responses and input by others as collective thought gives value and credence to what’s presented. Thank you Brenda! Brenda’s remarks encouraged me to review my work and to dig deeper. They drove me to a different direction completely changing the landscape of my original post.

Looking closely at the survey above, the naming of Stony Run and Flat Branch provides a solid starting point to locate John Honeycutt’s land. Note that the survey plat is drawn upside down! Once John Honeycutt’s 100 acre land grant is placed on a map, other important lands on the east side of Stony Run begin to fall into place. Before delving into that, take a short look at the following video which I created for my first attempt at writing this post (now deleted).

So, even though Solomon Burris’ entry never matured, it appears that both John Honeycutt and Solomon Burris intended on living beside each other. Is that what really took place?

From the Montgomery County Entry Book, I noticed (below) that over half of the entries are marked with a double-lined X (red) which I’m almost certain indicates the grant failed to mature. Note that in 1841 David W Burris made a failed request for a grant to be issued on Stony Run. The land in question was to adjoin Charles Cagle and Benjamin L Whitley (first image). And in the second image, note that John Honeycutt failed in his attempt to receive a grant for 50 acres. Though John Honeycutt’s grant failed to mature, we know from the video that surrounding tracts mention a 50 acre tract as though the grant was issued. 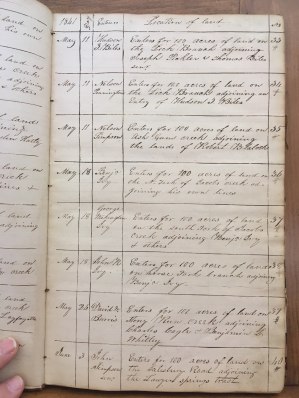 Having seen the situation repeated numerous times in Stanly County, I realized that like the others, this all arose in a jurisdictional confusion over land acquired via grant versus land acquired by sale. As an example, in 1842, James L Hartsell was issued a grant for 100 acres on Thorny Branch of Rockhole Creek (Stanly County grant #16). Seven years later, James L. Hartsell purchased the same land from James Adderton, agent for the Thornton Land Company. In short, the company represented Anna Marie Thornton who was the widow of William Thornton. William Thornton designed the United States Capitol Building and purchased over 40,000 acres in now Stanly County as part of his gold mining interests. Thornton purchased the land from Barnabas Dunn and several other speculators who originally acquired it by grant in the 1790’s.

So, as had happened to James L. Hartsell, I believe Solomon Burris applied for a grant on land that was already owned at that time.

Digging deeper into the deed books, I realized that I had overlooked an important deed made to Solomon Burris. On 3 May 1850, Solomon Burris purchased 89 acres (Deed 2-327) from John Ward, Jery Adderton, James Adderton, & Daniel Freeman. These men appear also to be agents working in relation to the Thornton land interests. Situated on Stony Run, the legal description for Solomon’s purchase mentions John Honeycutt’s 50 acres, the Deberry line, Daniel Reap’s land, and a “branch.” Witnesses were David Burris and Mcama Willis.

Armed with this additional information, I remade the above video placing the new piece of land among the other known tracts.  Hopefully you’ll see how Solomon’s land changes what I believed and wrote previously. Take a look:

Below is a snapshot of the Stanly County GIS map overlaid with some of the tracts identified in this post. Most of the land boundaries from the video are still recognizable today. Solomon Burris Junior’s 88 acre purchase from John Ward and others is the bubbly textured tract crossing over Stony Run. To the north and west of that tract is a checkerboard tract that was first acquired by McKammy Willis. It’s upon that land where Solomon and Judith Burris were first buried. Their bodies were later moved to Pleasant Grove Baptist in 1939. Also, the DeBerry line passes the northern boundary of both Solomon Burris Junior and McKammy Willis (Green line). 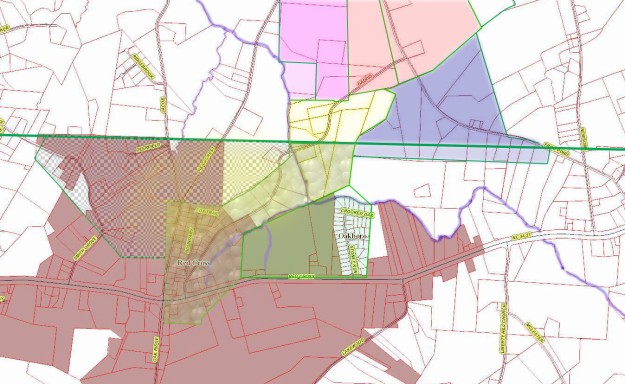