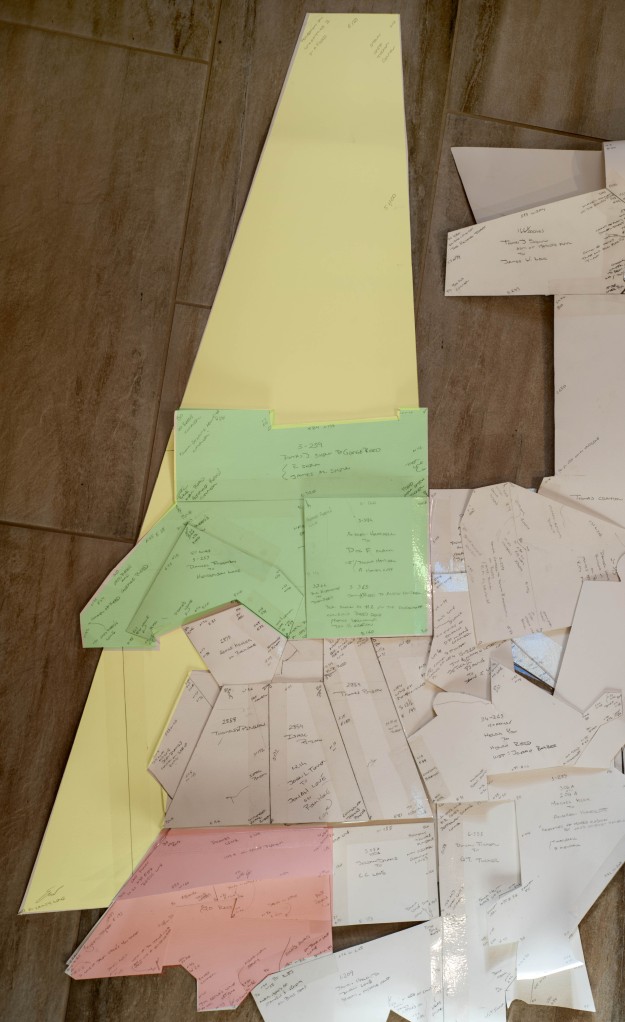 There’s a William Howell Taylor, a William Harvey Taylor and numerous families from North Carolina, Tennessee and even Indiana claim persons named William Hudson Taylor. As a matter of fact, I remain gobsmacked in learning that a possibly related William Hudson Taylor is buried at Arba cemetery in Randolph County Indiana. I remember back in the 1990’s driving out one foggy morning through the broad corn fields on my way to this cemetery. It was my intentions to learn more about a Quaker line of Thomas once believed to be my kin. I learned that Benjamin Thomas interred in the cemetery is not my kin, but some say William Hudson Taylor who is buried there …just might be. He is believed to be the son of Hudson Taylor Senior of now Stanly County  North Carolina.  How did this guy end up in Indiana and what’s his story!!??

Over the next few months I’ll be pondering the Taylor family; of complicated bits of a story even more tangled by the nature of land records along the Rocky River here in North Carolina. And, as for this post, I’d like to share with you a most amazing court case. Raised by Doctor F. Mann against William H. Taylor, the suit offers a glimpse into family lands while carrying the most studious of us back to the earliest days to the backwoods of western North Carolina. The story also links us to an important time and to the family who was first in America to make a profit mining gold.

Indebted in the sum of $28.80; a cow, a calf, and a rifle gun were conveyed by Hudson Taylor to William H. Taylor on 15 Mar 1843. The transaction was witnessed by Isaac Biles who must be related to Hudson Taylor Senior’s daughter Dovey who happened to marry Alexander Biles.

And then, dated 23 Jan 1854, Daniel Freeman sold to W. H. Taylor 174 acres (3-314 Stanly) situated “on the fork of a branch.” The land was originally part of a huge tract granted to speculators Thomas Carson, William Moore, and Barnabas Dunn. Within the body of the deed, W. H. Taylor is referred to as “Howell Taylor.”

Rising out of the Stanly County Superior Court in 1854, a suit of ejectment filed by Dock F. Mann against William H. Taylor reached the North Carolina State Supreme Court. At issue was the grounds and validity of an ancient ten year agreement pertaining to the above 174 acres. At the time of the suit, the 174 acres was identified as adjoining the lands of George Reed, brother of Conrad Reed who’s credited as the first non-native person to discover gold in America.

In locating the 174 acres, an earlier conveyance from Stephen Kirk to Thomas J. Shinn was offered as evidence. Dated 13 Aug 1833, Stephen Kirk sold a whopping 1,999 acre tract excepting 200 acres which had been deeded to Tucker and Shinn. Further depositions in the case show the 1,999 acres later fell into the hands of one Hartsell before being sold to Doctor F. Mann.

From the metes and bounds, we know the 1,999 acres lies upon “the waters of Reedy Branch” with one corner being described as “a persimmon in the line of Tract 2.” Then, running southerly, the next line ends at Shinn’s, Smith’s, and Tucker’s corner. Emphasis on placing the disputed land along  what’s referred to as Great Tract 2 is crucial and a point that I believe may have been played in error.

Also brought into evidence, the above deed lies within an Aug 1745 grant of 12,500 acres to Arthur Dobbs of Castle Dobbs, Ireland. The 1,999 acres had been subdivided from the tremendous 12,500 acres and in 1745 was described as being located on Johnston River (now Rocky). The tract was but a small portion of twelve 100,000 acre tracts totaling 1,200,000 acres all together. “…that about some 40 years since [aprox. 1814], he was present at the trial of a suit in Cabarrus County court & then heard one Love who was sworn and who is since dead & who testified on said trail in Cabarrus that there was a post oak marked as a corner at the Gum Pond and that the post oak was said to be a corner of tract number two of the Big Survey.

William Stancel, a surveyor testified he had surveyed the land in controversy & began as directed finding no corner there or pointes, and then east on an old marked line towards the Gum Pond – that the line looked old though he did not box any trees – and said marked line did not continue the length of the line he was surveying for the plaintiff, but only part of the way and he found no corner at the gum pond.”

The court ruled against a new trial based on:

At Superior Court, a new trial was refused, the rule discharged & judgement was made for the plaintiff. The defendant, William Howell Taylor, prayed an appeal which was granted. I’m not sure how the Supreme Court case ended though it seems the archaic stipulations from the 1745 grant along with the inability to properly locate the land would have played an evidentiary role in determining the outcome. I believe the Doctor F. Mann won the battle in court.

Let’s take a look at some of the Taylor lands, particularly those related to the case. Let’s look at William Howell Taylor, his family, and his parents Hudson and Rhoda Kettle Taylor. 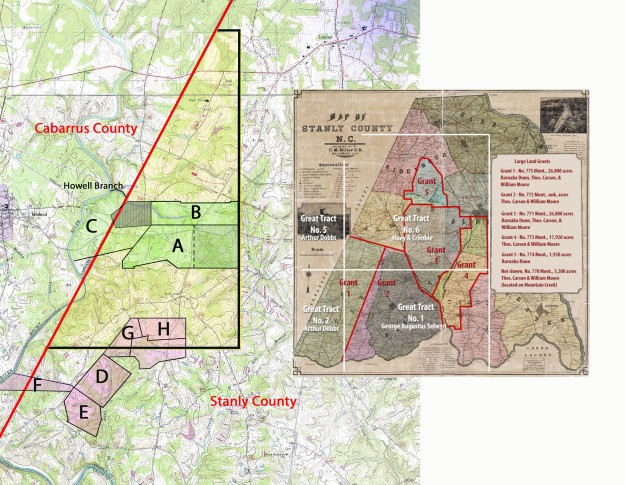 The huge yellow tract shown above represents the 1,999 acres sold by Stephen Kirk to Thomas J Shinn. The tract’s visual portrayal north and south along the Cabarrus line should not be considered perfectly accurate. However, I’m sure it’s location is close enough for this discussion. Note from the legal description below that the northern boundary (north of present day 24/27) adjoins “Tract 2.” For sure, that statement refers to the east/west dividing line running between Great Tracts 2 and 5. As a matter of fact, study the inset map above and you should be able to place the 1,999 acres as being in the extreme northeast corner of Great Tract 2.

The title history below represents the breakup of the 1,999 acres along with the land (in GREEN) that was at center of Doc. F. Mann’s law suit. A deed from Thomas J. Shinn to Conrad Reed [the little boy who finds gold while playing in nearby Little Meadow Creek] is identified in green as being tract A above. Looking below,  you’ll notice that both Doc F. Mann and William H [Howell] Taylor claimed ownership of the same piece of land. The eastern half (checkerboarded) of Conrad Reed’s land (Tract “A”), being the disputed land, seems to adjoin the north to south dividing line between Great Tracts # 1 and 2. Take a look at the inset image above. However, I’m not so sure as grants and other deeds indicate the boundary line should run very close to Hwy 200. Something is amiss. Anyhow, take a look at the following:

Note that the above tract was indeed subdivided from the 1,999 acres of which the northern most line is referred to as being “the line of Tract 2”. But, the division of Conrad Reed’s land is further south and does not join the Great Tract boundary line. Instead, the title history for the subdivided 1,999 acres consistently mentions George Reed’s land along with the line of Conrad’s Tract # 2. In my humble opinion, I think the legal action occurred in error out of a confusion between a line in the Great Tract #2 and tract #2 of the lands of Conrad Reed deceased. But wow, even if so, look at what such a simple mistake offers us! And, before leaving the “green zone” of this story, please take a look at tract “B” located to the north of Conrad’s land. It’s the lands of Conrad’s brother George frequently referred to in the above title history:

In reading the above, did you notice the red flag? We know from deeds that William H. Taylor’s middle name is Howell. And, here, upon the land nearly adjoining the said Doc F. Mann’s disputed tract is a corner known as “Howell’s.” Wow! So, who is this Howell person and does he have a place in our story?

Being the dark shaded cross hatched area in “C” above, note that Joseph Howell’s land fell into the hands of John Reed, father of Conrad and George. It’s easy to imagine the land as later belonging to John Reed’s sons. And then, in 1854, Joseph Howell’s 100 acres is sold as being part of a larger  conveyance to Henry Yow:

So, at this point we clearly see why George Reed’s tract “B” above would mention “Howell’s Corner.” And, we now know the stream which anchors tract “C” on map is named “Howell Branch.” I’d like to be able to declare that William Howell Taylor is somehow related to this much earlier Joseph Howell. However, I don’t have that answer and will leave its discovery to others. For now, let’s turn from the Green Shaded Tracts to the Red Shaded Tracts reflecting the family of William Howell Taylor.

We believe that Hudson Taylor Jr. married first to Elizabeth Howell whose relation to the above Joseph Howell is unknown to me. I believe William Howell Taylor is the son of Elizabeth and therefore carries the name of her family.

Following the death of wife Elizabeth, records show that Hudson Taylor Junior shared financial interests with a lady named Rhoda Kettle. It wasn’t until a considerable amount of time after being identified with Hudson that Rhoda actually married Hudson Taylor Junior. I’ve been unable to locate Rhoda’s parents though I wonder if her name is correct? You see, her lands are located close to George Kestler and others of that surname. Though a stretch of imagination, is it possible Rhoda’s maiden name is Kestler?

Take a look below at the information on the lands (Shaded Red) in western Stanly County belonging to the family of Rhoda Kettle and Hudson Taylor Jr:

To the south of the above is a tract “E” above which was sold by Rhody Kettle to Edwin Taylor. Edwin is believed to be the son of Rhoda and Hudson Taylor Junior. Note that Rhoda still uses her maiden name which raises questions as to her marital status. And, I’ve found no record indicating how Rhoda acquired Tract “E”:

To the west, on the east bank of Rocky River, William Howell Taylor received a portion of land originating with John Polk before passing through the hands of Henry Cagle and the division of Frederick Kiser’s land. Identified in the illustration above as Tract “F”, the land adjoins the western lines of Rhoda Kettle’s land:

Adjoining Henry Cagle’s Tract “D” to the north, Edmond and Catherine Bond received two grants in 1842. They are:

Edward and Catherine Bond moved to Cabarrus County with no deed showing the sale of their grants. And then, in 1854, Nelson Taylor, sold a large tract of 274 acres in which the two Bond grants can be placed. Who is Nelson Taylor?

Born ca. 1825, from estate records we know that William Howell Taylor married Mary, the daughter of Solomon Hartsell. Both Mary and her husband W. H. Taylor are mentioned in Solomon’s loose estate papers. There are several articles in the newpspers about Howell Taylor.  In one, he was charged with illegally selling alcohol while another the burning of his barn and livestock. Howell Taylor lived a long life and died 10 Sep 1906 according to what’s found on findagrave. There, it says that W H Taylor and wife Mary are buried at Love’s Grove UMC. However, a newspaper article out of Salisbury marks Howell’s death as being a year earlier. The following appears in the Carolina Watchman: 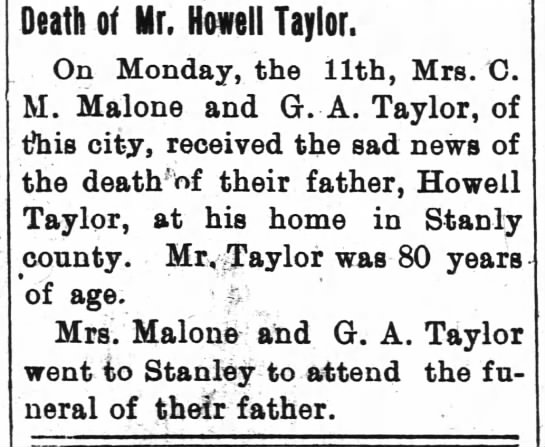