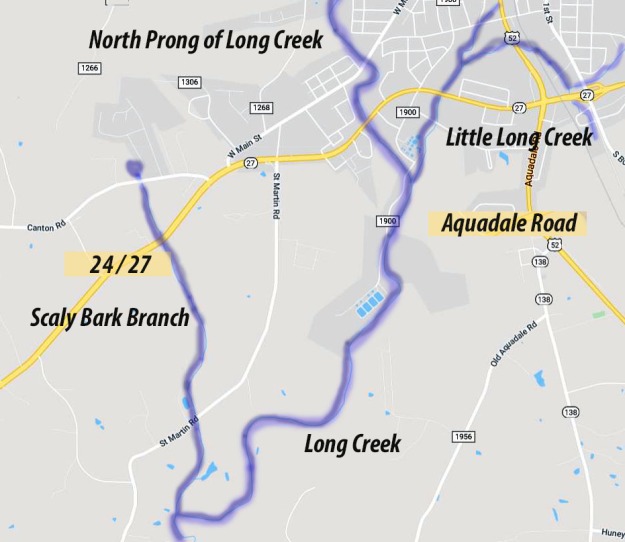 This week I’ve spent a lot of time in both book and mind walking the banks of Long Creek. I hope to learn something new of the Taylor family and how they might have connected to my Solomon Burris family. Remember, it is believed that Solomon married Judith Taylor and we know that the couple in turn had a son Taylor Burris.

It seems something new and different is learned each time I poke my nose into land records. This outing was no different as the records led me to a fellow named Samuel Strudwick. All of us with roots in Stanly County know of important locals and of family traditions running deep. But, of that number, how many do you know who were seriously important? And of that dwindling number, how many had life stories spanning the ocean blue? This fellow called Samuel fits that bill.

In 1795, Thomas Lowder’s 200 acre grant (2514 Montgomery) on Long Creek was identified as joining the lands of Joseph Thomason, Frederick Hinson, Hudson Taylor, and “the Strudwick Tract.” Curious of the name Strudwick I turned to nclandgrants.com which was created by my distant cousin David McCorkle. Ananias Thomas who died in 1867 Union County NC is a common ancestor to both David and me. Let’s look closer at the life of Samuel Strudwick.

Samuel Strudwick acquired 10,000 acres in New Hanover County along with 30,000 acres in the Haw Old Fields of Orange County. For a time he lived at Stag Park on the 10,000 acres located near present day Burgaw. Samuel acquired the total of 40,000 acres by way of a 1736 debt owed by North Carolina Governor George Burrington to the said Samuel’s father Edmond. Landing at Brunswick along-side Governor William Tryon, in 1756 Samuel sought to take possession of his father’s lands in Orange County. Reaching Orange County he learned that squatters and others had already claimed much of the land. However, in September 1761 Samuel was able to formally purchase Governor Burrington’s sizable holdings.

Samuel Strudwick was among the cultural elite. Appointed to two of the most lucrative positions in State Government, he became Secretary and Clerk of North Carolina Pleas.

Prior to the Revolution, in 1775, Samuel Strudwick received grants for 4 (one square mile) tracts situated on the north side of Lake Matamuskeet in Hyde County. He also received several grants totaling about 1000 acres in New Hanover County.

As for this story, in early Anson County, Samuel Strudwick received 28 patents including those for land on Cartledge Creek, Cheeks Creek, and Long Creek in what’s now Stanly County. Seven of the 28 tracts were located on Long Creek and note that all 28 patents aforementioned were issued in 1775.

As war broke out Samuel Strudwick retreated to his Haw River plantation on the Upper Cape Fear near Hillsboro. He eventually died ca. 1794 with legal records in England later accounting for a legal battle as his grandson attempted to claim inheritance lands in England ( The English Reports – 1904) :

I’ve found no record of Samuel’s disposal of his Anson County lands. However, their location becomes known to us today through the close inspection of later land transactions

(Deed 3-60 Stanly), dated 7 June 1828, Thomas Lowder conveyed to Daniel Lowder two tracts of land on Long Creek. The first was originally granted to John Cooper in 1774. And as drawn in he survey below, the second tract is identified as being granted to Samuel Strudwick in 1775. By 1828 the metes and bounds had changed with language connecting the tract to the lands of William Weaver and Samuel Lowder. Note the notch cut out of the 1828 deed (red)? As we go forward, this will be an important element in connecting one of Strudwick’s tracts to others.

And now I introduce Mr. Daniel Moose. Back in 1775 when Strudwick’s above land was issued, there were but a hand full of people living along the creeks in what’s now Stanly County. Taking advantage of being among the first arrivals, it was neither desirable nor practical for people like Samuel Strudwick to patent land closely adjoining others. The resulting landscape created odd gaps meandering through a patchwork pattern of properly shaped square and rectangular tracts. And in this case, it wasn’t until 1829 that the crazy shaped negative space was back filled when Daniel Moose received a 250 acres patent for one of the oddest and yet most telling pieces of land I have ever found:

Looking back to Samuel Strudwick’s 100 acres, remember the curious red notch added when the land was later conveyed by Thomas Lowder to George Lowder? Note the survey for Daniel Moose’s land honors the notch with a matching appendage (red) that allows us to clearly identify the 1775 Strudwick tract.

The following puzzled collage of hand drawn land grants carries this theme a bit further. I’ve colored Daniel Moose’s 250 acres yellow and you can see how it wraps around Samuel Strudwick’s patent which was later sold by Thomas Lowder. The Thomason lands are to the south and several of Hudson Taylor’s tracts appear to the east.

I’ve yet to physically locate the above on today’s maps though I believe the Creek as shown may illustrate the fork of Little and Big Long Creek which is located a little south of 24/27 and west of Aquadale Road.

In closing, this little journey has opened my eyes into the lives of those living along Long Creek. And yet, I have to wonder.  It must be further pointed out that Samuel Strdwick acquired 30,000 acres on the Haw River in Orange County upon which his children resided well into the 1800’s.  We also know that the late 1700’s migration to the Long Creek area included many people who lived earlier in Orange County. And remember that Samuel Strudwick complained of a multitude of people who had squatted on his land along the Haw River.  As for me, I have to wonder if there is any connection between Strudwick’s actions and the move of others to now Stanly County?  Were people kicked off of their land or had the Studwick family enticed or been a part of an advertised scheme to relocate people?

The story of Samuel Strudwick is indeed pretty cool and one worth retelling when in conversation about the founding of Stanly County. But much more than that, Strudwick is but a piece of the puzzle that will hopefully lead us to a better understanding of all our ancestors. Note that the fork of Little Long Branch lies a short distance to the east of Solomon Burris’s purchase on Scaly Bark Branch. And, people in this report appear as witnesses in the title history of that land. My walk along the records of Long Creek surely passed over Solomon’s early neighborhood. But, much more research is needed to call it home. So let’s get to it in hopes of figuring out how this story may end!

4 thoughts on “A WALK ON LONG CREEK”