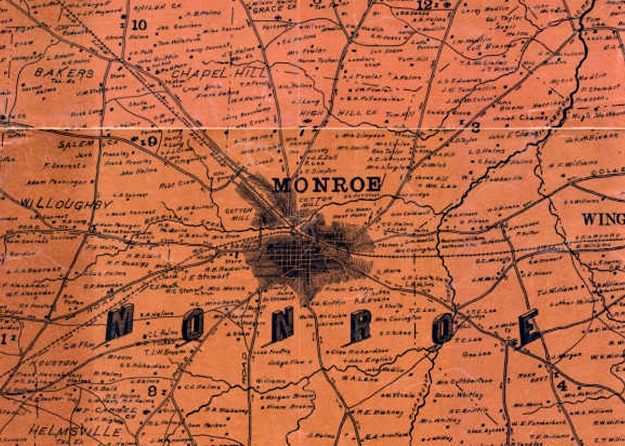 Those of you from Union County in North Carolina have all heard that the county’s first court met at a place called Labatt’s Crossroads. As the story goes, there was an Abraham P. Labatt who “lived out at the Houston or Tindle place. It was from him that the cross roads there take the name of Labatt’s Crossroads.” Short story, huh? There’s got to be more to it and during a recent visit to the Heritage Room in Monroe the helpful folks fired me up to learn the rest of this story.

It was there where one of the volunteers told me a little more about Labatt’s Crossroads and that it was once situated a mile or so to the west of the present day court house …maybe somewhere near the Concord Road. Before that I had no idea where the crossroads were located. And as for this post, I’m less concerned with location than how it all came to be. So, let’s get started.

Abraham Cohen Labatt is Jewish, being the son of Samuel and Miriam Labatt. Born in Charleston, South Carolina, it was there where Abraham married 18 Feb 1825 Miss Caroline Hyams, the daughter of Samuel Myers Hyams and wife Miriam Levey Hyams. Caroline’s mother Miriam died 4 years prior to Caroline’s marriage and is buried at the Hanover Street Cemetery in downtown Charleston. I’m not certain if the grave survives.

At some point shortly after the marriage, Abraham, his wife Caroline, and much of her family removed to present day Union County. Dated stories from area newspapers paint the picture that Abraham may have been among a group of peddlers who had moved inland from Charleston. I believe this idea falls way short in illustrating Abraham Labatt’s potential as well as his achievements. He was a great man.

Beginning in 1827, Abraham Cohen Labatt made several sizeable purchases in what was then Mecklenburg County. The deeds are:

Indicating that he too moved from Charleston, or at least bought into the journey west, Caroline’s father Samuel Hyams made out the following appointments for power of attorney:

• Deed 22-84, Mecklenburg NC, 30 Oct 1830. Samuel Hyams of Charleston SC to Abraham C. Labatt, being “all that land of mine and one building thereon in Mecklenburg County NC crossroads known by the name of Jacksonville now in the occupation of A. C. Labatt.” Also included were named slaves Sandy and Gabriel along with the large still and worm and household goods etc. Wit: Joseph B. Marks. Note that Caroline Hyams’ sister Eliza married Joseph Bensaken Marks. This transaction was registered in both North Carolina and South Carolina.

Wow, from the above, we now know the “crossroads” were in place as early as 1830 and their crossing was then known as Jacksonville. Would this be in honor of Andrew Jackson? Note that Samuel Myers Hyams named a son Andrew Jackson Hyams who was born in 1818. From Biographical and Historical Memoirs of Louisiana (1892) appears the following biography of Abraham Labatt’s son, David Cohen Labatt:

David Cohen Labatt was born in Mecklenburg, N. C. August 15, 1826. His father Abraham C. Labatt, a native of South Carolina, was one of the founders and first settlers of Cheraw, S. C., from whence he removed to Jacksonville, N. C. The name of the little town was given by Abraham Labatt, who was appointed post master at that place by President Andrew Jackson. He married Caroline, the daughter of Samuel Hyams of Charleston, S. C., and a sister of Lieutenant-Governor Hyams of Louisiana.

We now know the naming source for what was once the town of Jacksonville. And connected the old Labatt’s crossroads to deeds, exactly where did they lead and where did they come from? No deed showing how Samuel Hyams acquired the land can be found in Mecklenburg. I wonder from whom he purchased it?

On 13 Aug 1831, Abraham C. Labatt as agent for Samuel Hyams of Charleston sold the above lands to John Conner of Charleston SC (Deed 22-187, Mecklenburg NC). And, by this time Abraham had sold his own land situated on Buck Branch of Richardson Creek to Thomas P. Dillon of Anson County (Deed 21-502, Mecklenburg NC). So, at this point, where do we go? What happened to Abraham and his wife Caroline? Is there any more information to glean on what was once the Jacksonville crossroads?

Dated 3 Nov 1829, A. C. Labatt placed the following advertisement in the Western Carolinian. To me it’s perfect! Apparently Abraham built a very nice “House of Accommodation” located on what I know must be the old Charleston Highway. Following present day Hwy 601 north into Cabarrus County, it turns a bit taking Mt. Pleasant Road to the crossing of Rocky River at Hagler’s ford. Along the way, in early Mecklenburg County grants and deeds, there are several locations this road traveled where it was identified as being the “Charleston Road.” And, upon crossing the river towards Concord, the road became known as the “Dutch Road” and earlier the “Indian Path.” And, in the advertisement, the other roads are identified as the Rocky River Road and Wadesboro roads. One of these might be the present day Hwy 200 or 601. The other would have been the road running possibly from Charlotte to Wadesboro.  Abraham Labatt also mentions the gold country as well as Virginia Springs. That’s a new one for me! 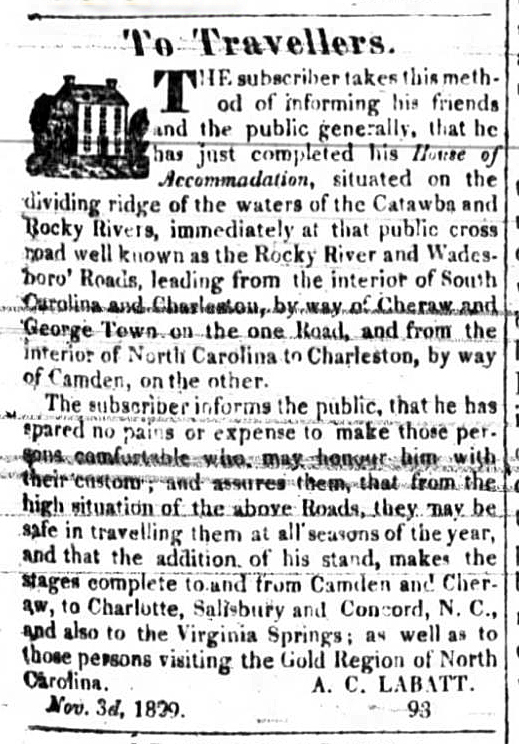 At this point the story of Abraham Labatt in North Carolina should come to a close as he and his wife moved to New Orleans, Louisiana in the 1830’s. Also moving with them were members of the Hyams family including Caroline’s father Samuel. Some 5-10 years after the move it was decided to create a new county from the eastern portion of Mecklenburg and the western portion of Anson. I imagine Abraham Labatt’s House of Accommodation served well as the initial court house. And looking into period newspapers, many political meetings also met at the location. I’ve yet to research this further, but wonder if there are other deeds which detail the architectural history of Labatt’s crossroads. 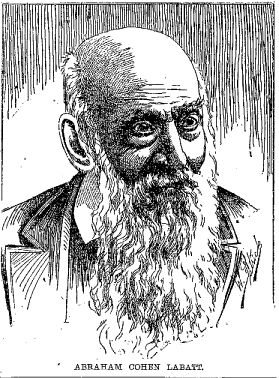 The life of Abraham Labatt was much more adventurous than the memories he left in our fair state. He did so many things and did them well. He was among the founders of the Jewish Synagogue in Louisiana. A fire fighter, he also helped in founding the firefighter’s benevolence fund in Louisiana. From the Texas Handbook Online, one of the first to enter the Houston shipping harbor, he was a ship master on board the Columbia which was the first steam ship to trade between Charleston and Texas. He was one of the first in founding masonic orders in both Texas and California. Following the 1849 gold rush, Abraham went to California where he was among the founders of the San Francisco Synagogue. He returned to Texas where his wife Caroline Hyams is laid to rest in Waco. Abraham Cohen Labatt lived until 1899 and is buried in Galveston.