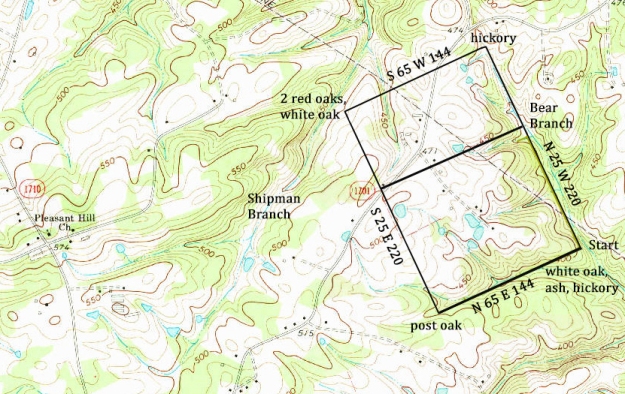 I love it when old grants and deeds can be located on present day maps. Take a look at the following Google image and see if you can locate William Gurley’s 1801 grant: 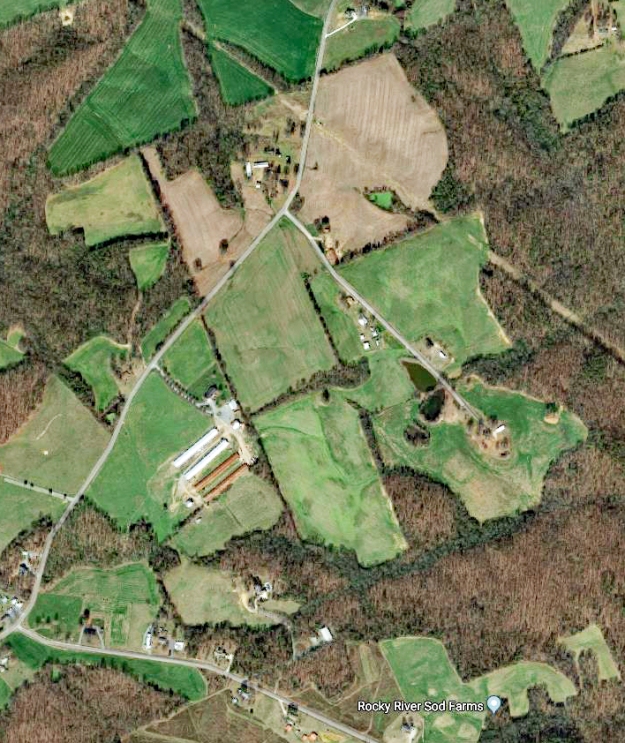 After receiving this grant it’s not long before William Gurley dies as his last will and testament was recorded in Oct 1804 (See bottom of page for the last will and testament). William Gurley’s widow Millinder and their older girls Elizabeth (Austin), Sarah (Lauhorn), Jean (Pool), and Charlotty Austin are clearly defined in the will. At the end of the will you’ll see mention of two other girls named Darcass and Ferrabee. Younger and at that time unmarried, the two received slaves and household items needed to start a new life. They also were to divide 500 acres of land on Bair Branch and Shipmon’s Branch:
Item I gave and bequeath to my Daughter Darcass one Negro man Called Tom one three year old heffer one two year old mair one Feather bed formerly called hers together with the stead and furneture thereto belonging one Flax Wheels one Dish one bacon two plaits three Delph plaits one Iron pot two weavers Slays also five hundred Acres of land lying together on the Bair branch and the Shipmons branch which sd Land I will to be Equally Divided between sd Daughters Darkess and Ferrebee.

Item I gave and bequeath to Daughter Ferrabee one Negro man called Jack one Mare Coalt one Cow and Calf twelve geese one cotton wheel and cards one small dish and large bacon one puter plate three Delph plaits one Dutch oven two weavers Slay also two hundred and fifty Acres of Land above mentioned one Cow hide.
William Gurley’s last will and testament must have been contested as a court ordered division of the estate recorded Oct 1815 appears in deed book P, page 261: 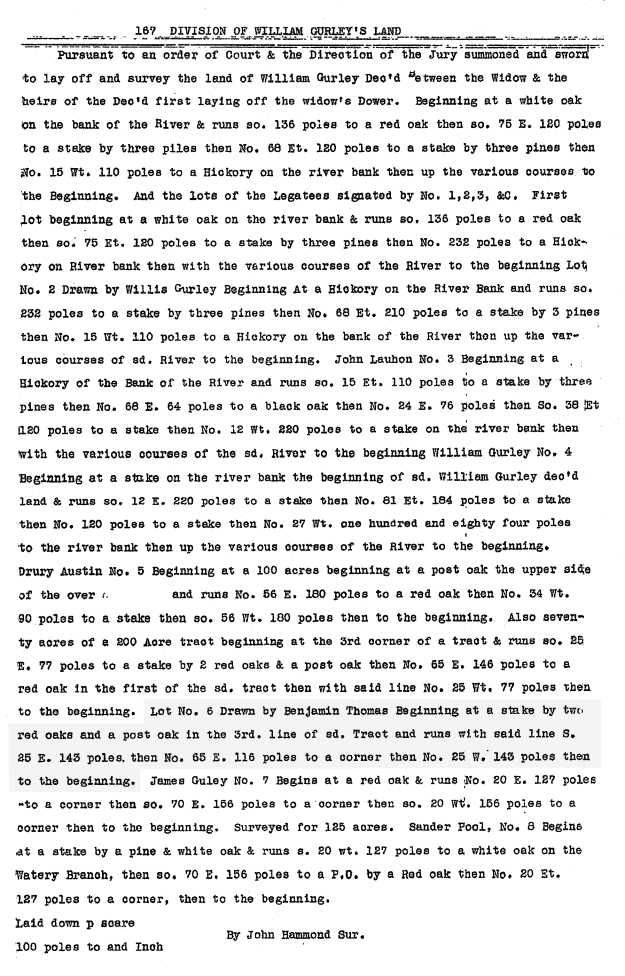 Shaded gray above, Benjamin Thomas (for his wife) drew lot number six of the estate being 130 acres of William Gurley’s 200 acre tract. And, drawing lot number 5, Drury Austin received two tracts including the remaining 70 acre northern portion of William Gurley’s200 acre tract. Note from the will that the land on Bear Creek should be 500 acres but in actuality is only 200 acres. And note from the will that the tract had been ordered to be divided between two daughters Pherabee and Darcass. However, the 1815 division gives land to Drury Austin whom we know married daughter Elizabeth Gurley. Looking at the attached estate plat, you can get a better idea of William Gurley’s estate lands: 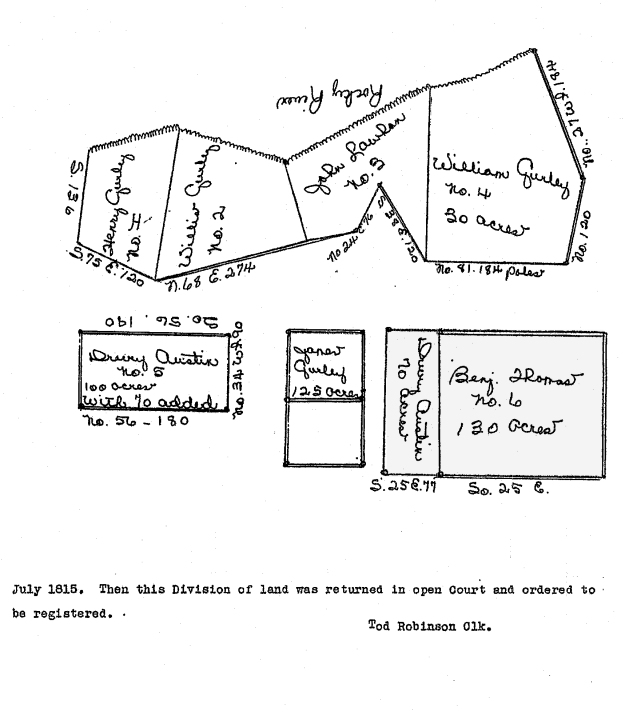 It’s been widely thought that tract number 6 was bequeathed to Benjamin Thomas Senior. However, Benjamin Senior was much older making me question the age differential between husband and wife. Besides that, shortly after the division, on 11 Oct 1818, Benjamin Thomas Junior divested himself of the land by selling the 130 acre tract to William Morris of Mecklenburg County (Deed S-152 Anson). The transaction was witnessed by Anias Thomas and Jas. Morris. There’s no surviving record of what happened to Drury Austin’s 70 acre portion. We do know that Drury ended up in Lincoln County Tennessee with his brother Michael.

Let’s take a look at a few other pieces of land acquired by William Gurley. 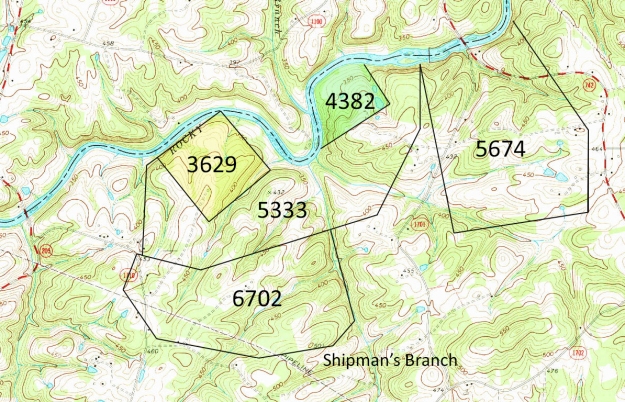 Dated 25 Jul 1774, Solomon Townsend received land grant (3629, Anson NC in yellow) for 100 acres near the mouth of a small branch (likely being Shipman’s Branch). On 6 Jul 1779 Solomon sold the land to Middleton Pool with witnesses being William Brooks and William Bennett Senior. And then on 28 Feb 1782 Middleton Pool in turn sold the land to William Gurley with witnesses being Jacob Green and John Austin.

On 9 Mar 1799 William Gurley received a Secretary of State land grant (5333 Anson NC) for 250 acres situated on Rocky River.  Note that this grant captured or surrounded the lands that William Gurley had earlier purchased of Middleton Pool.

One other tract granted to William Gurley ( 5674 Anson NC) was issued on 30 Aug 1802. Per his will and as recorded in deed book S, page 118, on 6 Apr 1815 William Gurley of Anson sold this tract to his son Willis Gurley. Witnesses were Thomas Vann and Benjamin Thomas Senr. And then apparently taking the monetary gains and moving west, on 13 Oct 1819 Willis Gurley sold the tract to David Cagle of Cabarrus (V-307 Anson NC). Witnesses were Benjamin Thomas and J. B Skinner. 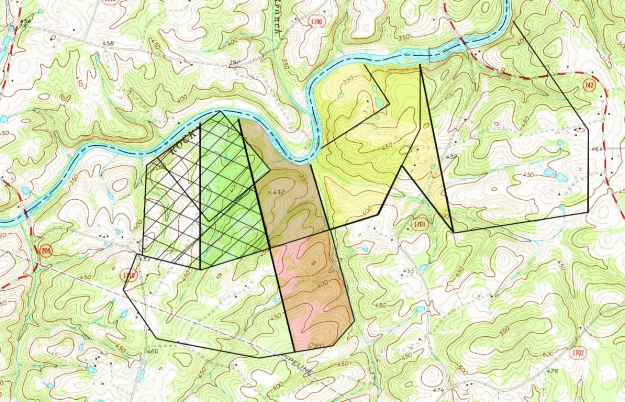 Looking at the above, and as surveyed for William Gurley’s widow Millinder, the dower tract is identified by hash marks. The yellow shaded area to the right fell into the hands of John Laughorn who married Sarah Gurley. Then, on 11 Jan 1817, William Hammond Esq. Sher. sold the tract to Willis Gurley by virtue of an execution against Sally Laughorn. Witnesses were William Gurley and Benjamin Thomas. The green shaded area fell into the hands of Willis Gurley per the estate of William Gurley. Then on 1 Sep 1815, almost immediately after receiving the land from William Gurley’s estate division, Willis Gurley sold that tract to Benjamin Thomas (R-90 Anson NC). And, to the left of the green shaded tract is an unshaded area falling within the widow’s tract. Drawn by son Henry Gurley, dated 27 May 1817, Henry Gurley now of now Haywood County NC sold his land to Benjamin Thomas Junior (S-168 Anson NC0. John Austin and Jac. Austin witnessed the transaction. So by 1817 Benjamin Thomas had a grant to the south of the Gurley land and had bought out the estate lands along the river to his north.

Dated 22 Jan 1835, being just a short time prior to penning his last will and testament, Benjamin Thomas Junior deeded 200 acres (Z-136 Anson NC) to his son Jacob Thomas. For love and affection, the gifted land was part of two tracts. And, helping to locate the land, one of the short lines on the south side crossed Shipman’s Branch. Also, one of the back lines for this tract adjoined a line marking Benjamin Thomas’ 300 acres. Because the 300 acre tract was granted to Benjamin Thomas Junior, it’s my belief we are looking at Benjamin Junior and his son Jacob.

Benjamin’s wife, who I think to be Darcass Gurley, died shortly after 1820. Prior to 1830, Benjamin Junior married second Elizabeth Brown Traywick to whom was born a son Jesse Green Thomas. In a letter written home during the civil war, Jesse pleads for a letter from “Jacob.” I believe that Jacob is Jesse’s half-brother born to Darcass Gurley.

Last Will and Testament of William Gurley

In the name of God Amen I, William Gurley of the State of North Carolina and County of Anson Being in Perfect mind and Memory Dothe Make this my Last will and testament and calling to mind the Mortality of my Body and knowing that is is appointed for all men once to Die I first recomend my Sole to God hath gave it and my body to be Berried in such a place as my Executor shall hereafter appoint and now for Setteling my tempora Estate

Item I give and bequeath to my Daughter Jean one Cow and Calf also three two year old hoggs Spaid Sows and Barrow belonging to the Laughon Gang, also two hundred and fifty acres of land on the Watery Branch to be Equally Divided between her three boys Alexander Pool and William Pool and Nathan Pool also the smallest sid of leather

Item I gave and bequeath to my Daughter Sarah one cow and Calf and one heiffer now in her possession also two Sows and their Shote and foure tow year old hoggs also two hundred Acres of land joining Leonard Musslewhites Loine including the Miry Spring also an Entry adjoining John Laughon also one side of Leather
Item I give and bequeath to my Eldest Son James Gurley one hundred Acres of land including the oak pond also one bull one Whipsaw and pile.

Item I gave and bequeath to Daughter Ferrabee one Negro man called JAck one Mare Coalt one Cow and Calf twelve geese one cotton wheel and cards one small dish and large bacon one puter plate three Delph plaits one Dutch oven two weavers Slay allso two hundred and fifty Acres of Land above mentioned one Cow hide
Item I gave and bequeath to these my Executors Willis Gurley and Leaonard Musslewhite three heffers and three sids of Leather one black some parts three year old another white and another brinded these to be sold to satisfy my just Debts.
also I do Nominate Constitute and appoint the afore sd. Willess Gurley and Leonard Muslewhite to be my hole and sole Executors of theis my last will and Testament as
Signed sealed and Delivered before us

Witness My hand and Seal