Stationed in Wilmington during the summer of 1862, Jesse Green Thomas was there in service of CSA Co. C. 10th Battalion NC. Better known as the Monroe Heavy Artillery, the unit was responsible for garrison duty along with the construction of defense works surrounding the port of Wilmington. Can you imagine the swampy lowlands and of the six mile long earthen breast works dotted with military encampments ? Imagine the excessive heat, the blood and sweat, and the never ending presence of mosquitos. It was in this environment where the young Jesse Green met his fate.

Born the son of Benjamin Thomas Jr and second wife Elizabeth Brown Traywick, Jesse Green Thomas likely received a basic education as was directed in his father’s 1836 last will and testament:

“I want three head of horses (sold) I want sold and I leave it to my wife Betsey to raise Jesse upon and if she marry again the property that I have left my wife Betsey belongs to Jesse Green Thomas …but what is in my houses and I want him to be Edicated with good learning.”

Putting his education to work, Jesse Green Thomas wrote at least 27 letters while in Wilmington. In four surviving letters to his mother, Jesse tells of life in the camp and of his insatiable hunger to hear from family back home. His letters also tell of loneliness, sickness, and they offer a glimpse of the wicked epidemic which would soon sweep through Wilmington.

I’ve prettified the following from transcribed copies graciously given to me years ago from Ms. Annie Lee Traywick. Please read and it’s important to note that they are in chronological order ie …1, 2, 3, 4:

It appears Jesse Green Thomas was among those who fell in what later grew to become an epidemic spread of Yellow Fever. In his letters he wrote mostly of care given in hospital as well as of his appreciation of good treatment while recovering at the home of an unnamed local resident. And written with greater urgency and a growing sense of despair, the last letter penned in early August foretells of Jesse’s ultimate demise. According to cemetery records we know that “Jesse (CSA) Thomas” is buried in a specially designated section at Oakdale Cemetery. His death date is listed as Oct 19, 1862. In this, Wilmington’s largest and most historically prestigious cemetery, there is a grassy hill scattered with but a few marked graves. Known now as the 1862 Burial Site of the Yellow Fever Victims, it is said that approximately 400 bodies to be interred were dragged from town, burned, and buried there in hopes of halting the spread of disease. At the front of this hallowed ground is a simple marker listing all of those believed to have been buried in the special plot. Among those listed is Jesse Green Thomas who lies at rest in row 4, grave 22. No longer is he away from home and pleading for the attention of family. No longer is he isolated by a lack of friendship. Jesse Green Thomas is at peace. 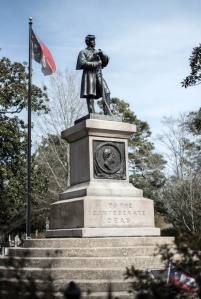 A matter of curiosity to me, it’s noteworthy that the 1862 Yellow Fever burial site is somewhat hidden behind the trees above Oakdale cemetery’s Jewish section. With no proof to make the claim, I’d think the Yellow Fever section is primarily the site where those buried are mostly townsfolk. Across the vast cemetery, on the other side, is a large earthen mound capped with a monument portraying a Confederate Soldier standing at rest. It is said over 300 soldiers are buried at that site.

There is no grassy area accounting for the sizeable space needed to properly bury 300 men. Did the soldiers die as the result of disease, suddenly in battle, or through slow attrition spanning the war? Is the burial site a pit grave for masses of men or are there many individual graves? Why is it a mound? And if a mound and as result of Yellow Fever, why is Jesse Green Thomas not buried there among other Confederates? Is it because Jesse Green’s last days were spent in the home of a local resident.