In August 1877, Jno. C. Love of the City of Philadelphia Pa purchased the following tracts adjoining Reed gold mine and Rocky River:

• 30 acres of land from Aaron Linker and wife adjoining lands of “Moses Linker, Jackson Linker, Reed Mine Company & Rocky River.”
• An undisclosed amount of acreage from Aaron Linker and wife being “the tract of land on which they now live adjoining the Furr Garman Mining Company.” The land also adjoined that owned by Wm. Linker, and Jackson Linker.
• 60 acres (28-32, Cabarrus County NC) “on which I now live” … and joining Aaron Linker, and “the river at the mouth of the branch.”
• 154 acres from Geo. Barba & wife, being lands where Geo. Barba & wife now lives, adjoining the river, “a corner of the church,” “Reed & Hartsell’s corner,” and A. Hartsell’s corner.

These deeds found years ago stir deep thought as the lands must have been very near to that once owned by our own Grandsire James Love. Who was John C. Love of Philadelphia and did he relate to our NC family? Prior to opening the Charlotte mint, how was gold accounted in what must have been an arduous trip from Reed’s mine to the federal mint in Philadelphia? Was selling gold anything like selling hay; did we simply carry it in bulk, weigh it, and receive payment in money? Or, were there family or other agents in Philly who managed our interests? Of all places, why was John C. Love of Philadelphia buying land around Reed’s gold mine?!! The story of John C. Love is nowhere complete, though what we have reads like a classic southern tale. It even cracks the door open allowing us glimpses into the possible lives of other lost LOVE.

On 30 Apr 1864, John C. Love enlisted as Private in Petersburg VA. He served under Capt. J. M. Hartsell and “joined from desertion Oct 18 1864 & deserted to the enemy Oct 29 1864.” A register of arrivals and dispositions of federal and rebel soldiers indicates J. C. Love was received Oct 30 1864 as a “Deserter from the Enemy” at Bermuda 100. From the register of rebel deserters taking oath, Headquarters, the Provost Marshall, Bermuda Hundred VA makes the following report. John C. Love was captured at Dept. Headquarters, Nov 4 186_ and confined at that time. On Nov 4 186_ he was turned over to Pro. Maj. Gen. at City Point VA with final remarks “To go to Philadelphia PA.” Looking at another paper, and on Nov 6 1864, charged as “Rebel Deserter,” Maj. Gen. U.S. Grant ordered that John C. Love be confined. He was sent on Nov 12 1864 to City Point where he was to be released. This by order of P. M. Gen Patrick. And again, the remark: “Went to Phila Pa.” Could it be? Is there a chance that this confederate soldier is the same John C. Love who purchased land in Cabarrus in 1877?

Poring through records from Stanly, Anson, Cabarrus and Union Counties, I found only one telling entry. The Jan 1867 minutes of the Court of Pleas and Quarter Session reads:

There was no mention of John C. Love in North Carolina census records, prior to or after the war. And though believing all LOVE in South Carolina descended from the likes of an early settler known as James the Weaver, the following census record from 1860 Jefferson Township in Chesterfield SC opens a door. 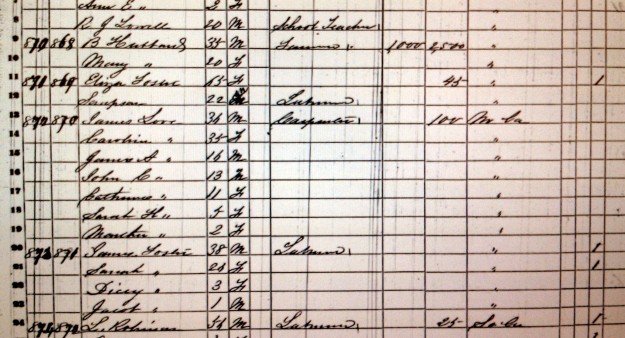 Born in North Carolina, James Love is listed as a carpenter living near the Brewer gold mine. The family does not appear in the county prior or after 1860. Note John C. Love, aged 13, would have sadly been of age to enlist in 1864. And also note that John C. Love’s father, (John) James Love is the same John J. Love enlisted beside John C. Love in the 42nd Regiment. More on the life story of John C. Love will have to wait for another day as the rest of this writing will be dedicated to the story of John James Love and other possible implications raised.

During and following the Civil War, J. J. Love and family first purchased land in Union County NC before moving to the Crab Orchard area of Mecklenburg. To my knowledge, there’s no further listing of son John C. Love in North Carolina. The family of J.J. Love:

Dated 28 May 1901, J. J. Love applied for a civil war pension claim. At age 78 and residing at Cluster branch post-office, he declared his service in “Co. B, 42nd Reg. NC. And in 1863, while in service at Seven Pines VA, he “received wound in left arm below elbow also on right leg.” Marking the death of John J. Love, dated 22 Jul 1904, 79 year-old Mary C. Love applied for widow’s pension while living in Rt. 2 Charlotte NC. She properly identifies her husband’s unit as Co. H, 42nd. Reg. NC. E. M. and Minnie Spoon witnessed on behalf of Mary’s claim. The following obituary marks the death of Mary just a few years later:

Obituary
Mrs. Caroline Love, widow of the late J. J. Love, died yesterday morning at 8 o’clock at the home of her son, Mr. J. B. Love, four miles from the city on the Mneville road. The deceased was one of the oldest women in, the county, being 83 years of age at the time of her death. She was a good Christian woman and had been for many years a member of the Hickory Grove Church. The interment took place at that church today. Mrs. Love is survived, by two children, Mr. J. B. Love and Mrs. Braswell, of Mint Hill.
23 Aug 1906 Charlotte News

Note that the death certificate for Gustavus B. Love indicates his mother’s maiden name was Honneycutt. Related or maybe not, there is a lost Love found in a bible record named Mary Fairly Love who married into the Honeycutt family. As with our J. J. Love, there are few to no records for Mary Fairly Love. However, there is also a person named John Fairly Honeycutt. In the tangle of Love, Honeycutt and Fairly is it possible there a possible family tie?