Last spring while at the old Burris/Commie Willis Cemetery clean-up day, I asked Pam Holbrook if there was anything she’d like for me to research or find. Newly involved with  my Burris family heritage, I sought to place my efforts where they would best serve our family. Pam encouraged me to look into determining the exact location of Solomon Burris’ original 200 acre land grant. Also, knowing there was an old Burris school in the area; she thought it would be nice to locate and determine if any  structural remains survive. More on the second wish at a later date. Pertaining to all this, I’m scheduled to provide an update on my project at this year’s Burris Family Reunion to be held October 19, 2019. Come join us!

Solomon Burris and family acquired numerous tracts of land spreading from Stony Run to branches of Long Creek in present day Stanly County. In advance of the upcoming reunion, I’d like to offer this preview into locating Solomon’s first known land acquisition. It’s too complex to properly convey in a short public presentation ….so here we go…

Dated 2 Jan 1793, Solomon “Burres” entered a Secretary of State land grant for 200 acres situated on the southwest side of the Pee Dee River. The grant wasn’t issued until 7 Jun 1799. Within the legal description found on the 16 Jan 1795 survey, the tract is identified as lying on “the waters of Big Bear Creek …including Barton Daniels’ Improvement.” That’s all. There’s no further information as the title history has been lost due to arson and the 1835 burning of the Montgomery County courthouse.

Armed with the above, I’ve spent most of the spring and summer plowing through area land records in hopes of finding clues as to the true location of Solomon’s land. It wasn’t until a few weeks ago that the pieces fell together.

Somewhere on the waters of Big Bear Creek, Solomon’s 200 acres (above) took on the shape of a large square. I began looking for the tract by searching deeds and the Stanly County GIS map in an area surrounding what we now believe to be the Burris lands. The area in question is in the vicinity of present day Pleasant Grove Baptist Church. Nothing jumped out in my search and the initial effort ultimately led to a dead end. However, I later learned that without knowing it, I had glossed right over the answer to my question. The process was not without value as I learned that Solomon’s son Joshua and others had acquired several tracts on the Big Branch of Bear Branch. The Big Branch loops west from Big Bear before flowing north as it passes by Pleasant Grove Baptist Church. Also, numerous tracts of land in the area originated through grants and early acquisitions by George Whitley. This is a good sign as George Whitley served as chain bearer in the 1797 survey for Solomon’s 200 acre tract.

I drew my circle larger and started looking farther afield. Things started to come together with the discovery of 55 acres on Ramsey’s Branch which in the deed, is said that the tract adjoined “the southeast Corner of Solomon Burris’ 200 acres.” Ramsey’s Branch flows in from the northeast, joining the Big Creek opposite the Big Branch and just north of Hwy 24/27. George C. Mendenhall of Guilford County sold the 55 acres to Needham Whitley (Deed 14-151). An attorney of Quaker stock, Mendenhall had once been disowned for his ownership of slaves. However, he was later memorialized for providing their freedom and removal as free people to the state of Ohio. George C. Mendenhall had purchased the land from Martin Almond

Adjoining the above Needham Whitley’s land to the east was a 78 acre tract granted to Nathan Coley. The land adjoined the said Whitley and the “Hey Meadow tract” to the north, the mill road to the east, and a tract to the southeast sold by Thomas A Coley to Joseph Morton. The latter tract joined the said Needham Whitley lands to the west and Joseph Morton to the south. To me this is all very interesting as I recently discovered that Jonathan Carpenter received a land grant “called the Hay Meadow.” Is it the same hay meadow mentioned in the deed? Jonathan has land ties to Solomon and also the family of Hudson Taylor.  Knowing Solomon married Judith Taylor, this all makes me question conventional wisdom. More on a later date. 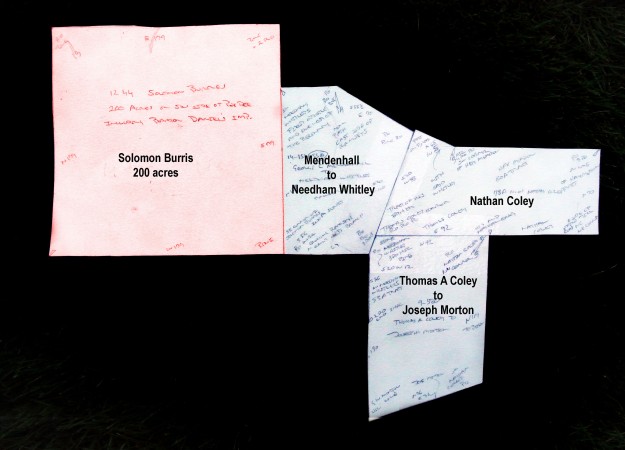 Boundaries of land often change over time. With each new owner you might find mentions of new neighbors and different landmarks. Overlaying the above, a layer of connected lands gets us a bit closer to identifying Solomon’s grant (see next image). Conveyances of the sprawling tract to the right passed through the hands of Needham Whitley, Green Whitley, and George W. Whitley (Deeds 14-149 and 14-15). The path of Ramsey’s Branch becomes more clearly defined by the zig-zag western edge of the tract. Note the lower westerly appendage of the tract was earlier purchased by Needham Whitley from George C. Mendenhall (Deed 14-179). This tract is identified as joining “The old Burrough’s tract to the north.” To the south and west of the sprawling tract is a tract conveyed from George C. and James Mendenhall to Joseph Morton. It wraps the northeast corner of a small tract of 37 1/3 acres which George Whitley sold to Joseph Morton. 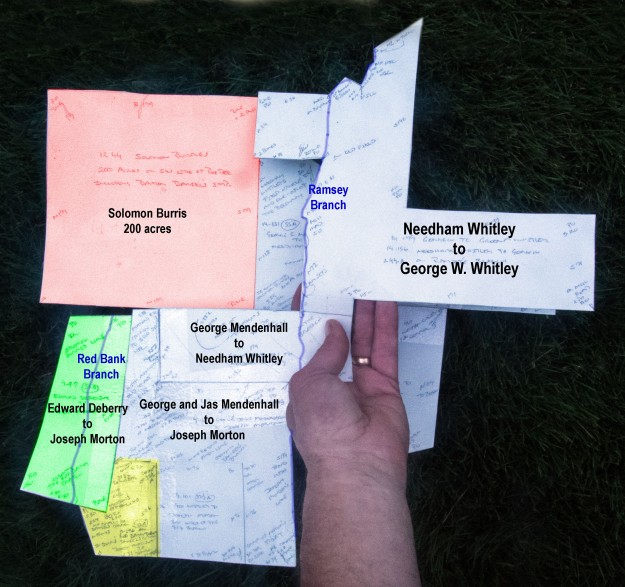 As for the far left tract in the above, Edward Deberry sold 70 acres (green) to Joseph Morton. The upper or northern line in this tract is identified as adjoining Solomon Burris’ land. And, of great importance, the lower or southern line crosses the Red Bank Branch. Where is that? It’s just to the west of Ramsey and therefore to the east of Big Bear. Finding this branch would certainly lead us beyond this maze of deeds to the place Solomon Burris once called home.

In 1866, Joseph Morton sold the above 70 acre Edward Deberry tract to Jonas Hartsell. At that time Joseph also conveyed a 22 ½ acre tract (yellow) between the 70 acre tract and Morton’s 37 ½ acres lying to the east (Deed 17-296). Note that one of the corners adjoining the southeast corner of the 70 acre tract states that the 70 acres once belonging to “Daniels.” Daniels! …this is perfect! Solomon owned the land to the north of the 70 acres which in the 1790’s survey is written: “including Barton Daniels’ Improvements.” And then, by the 1860’s, land to the south of Solomon’s tract is then identified as that belonging to “Daniels.”

Adding a final layer, as seen below, the title history for the land  captured by the large sprawling tract becomes more complete. Being the Lilly tract or otherwise known as Lot #2 of the division of Christian Burris, the 38 ½ acre tract (pink) was conveyed by Jacob C. Efird and wife Beada to Richard C. Lowder (Deed 43-68). The 1902 conveyance is for land once situated to the east of Solomon Burris’ 200 acres. The new deed indicates that Solomon’s old land was once owned by “Eli Honeycutt.” And, to the north, in 1900 Richard C. Lowder purchased 58 ½ acres (blue) from S. S. and wife M. E. Lilly (Deed 25-344). That tract is identified as being ”Lot #1 of the Division land.” This all shows us the Burris family remained in the area of Solomon’s 200 acre grant.

So, at this point, we know Solomon’s 200 acre tract, or a part thereof, later fell into the hands of Eli Honeycutt. The tract adjoined Needham Whitley land to the east and southeast. Either Paul or Barton Daniels owned land to the south of Solomon’s 200 acres. And, Red Bank Creek flowed through Solomon’s land prior to passing through what was once the Daniels’ tract. Locate today’s Red Bank Branch and we’ll locate Solomon’s land.

Returning to the Stanly County GIS site, I looked for trapezoidal shaped tracts comparable to the 70 acre tract once belonging to a member of the Daniels family. In the map below, the yellow tract fits the bill perfectly. It has bearings similar to the 70 acre tract and its western line parallels a branch that passes through a large square framed area of tracts to the north before flowing into Big Bear. The stream must be Red Bank Branch and the large tract to the north must be Solomon’s 200 acres. Going a bit further, lines of surrounding tracts are very similar in shape to those I’ve outlined as joining Solomon’s land. Without doubt, the GIS image below captures the lands of Solomon. But, what does the land look like from overhead, from the close-up view of a satellite? Look at the last Google Maps image and you’ll see that some 200 years after originally being granted, the lines of Solomon’s 200 acre grant are still clearly visible today. Look closely and you’ll see field and wood lines echoing the ancient land boundaries. And, of all things, the area of Solomon’s tract is the biggest thing you see on the one road in Stanly County that carries our family name. Yes, Solomon Burris’ 200 acres takes up much of the landscape on both sides of “Burris Road.” …a note to self, next time begin your search on the one road named for your family!

From Stanly County GIS Site: Solomon’s land is in red

Similar as above, though seen as a Google satellite image.

2 thoughts on “THE LAND OF SOLOMON”