The photo above stirs within me vague memories of the place where I was born. I see that curly haired boy and can almost remember the bed of irises along my family’s driveway. And, in seeing that mop of hair, I’m reminded of my mother telling of bathing me in the kitchen sink …of her smiling at the ringlets of hair that sprang from my little head.

Do I really remember that far back, or are these mental images merely the embodiment of all the stories I’ve heard so many times? Just as it is with any form of history, what is known about our past is predictably finite. At some point our recorded memory fails to accurately tell the story. For this reason, all the knick-knacks, pictures, and heirlooms filling our homes are there for but one important purpose. They trigger our thoughts, allowing us to hold to our past for but a little longer. Unlike the written or spoken word, or even photos or other sorts of pictures, such items reawaken our minds through the added sense of touch, smell and even taste. The value of such keepsakes last as long as their relevance is appreciated. Their overall composition, in turn, drives our visualization in a constant pursuit of an improved design.

This year’s clouds of pollen have passed and now my own landscape is being blessed by the showers and warmth of spring. Though my house is filled with heirlooms reminding me of our ancestral heritage, the story telling need not be confined within the walls of home. Even the things I grow and the stories they tell are not without value.
About the above irises, being in the 1950’s, my dad paid a dollar a head for them at a hardware store located on Statesville road. By 1962 the family moved across town to a new home in south Charlotte. My dad, of course, planted more irises and yet developed a liking for other flowers. One of his favorites was zinnias which he called his “pretty boys and girls.”

Following the passing of my father in 1995, I remember driving to Pope County Arkansas with my mother to learn more of her Love family who had moved there in the late 1830’s. Mom and I visited several graveyards including one belonging to Pleasant Love. Situated on a hill overlooking the Arkansas River basin (now location of a nuclear plant), the little cemetery stood on the edge of a wooded lot. Spreading out wildly from the gated family plot was a large patch of old cultivar iris. Maybe they were first planted at the death of Pleasant Love in the 1800’s. Standing there quietly, I wondered if the irises were the result of a hand full of bulbs the family brought by wagon from North Carolina. Was the story told by the flowers intended to begin in Arkansas or North Carolina?

Also, while in Arkansas, I visited nearby Pless Mountain where my father’s GG-grandfather had purchased land in the 1840’s. Peter Pless bought land in Arkansas although soon after he returned to Stanly County where in 1854 his last will and testament mentions his lands in Arkansas.

Item. I give and devise to my daughter Catherine, all that tract of land in the state of Arkansas, being in Pope County on Arkansas River containing eighty acres to have and to hold to her, and her bodily heirs in fee simple forever.

Peter gave his land to daughter Catherine who had recently married the widower George H. Teeter. Peter Pless’ son Solomon, my ancestor, did not make the trip and remained in Stanly County on the waters of Island Creek. Peter’s youngest boy, John Adam Pless was also raised in Stanly County. He made the move west around 1860. It was upon John Adam Pless’ land in Arkansas that Pless Mountain got its name. While in Arkansas, I collected a slab of black sandstone from the top of Pless Mountain. At that time, a family descendant and distant cousin gave me a prized photograph of John Adam Pless taken on his 101st birthday. Together, the photo and the slab of stone serve to remind me of this important chapter in my family past. 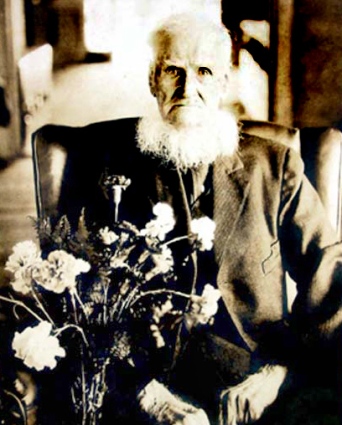 Amazingly, years after my trip west, I learned of the old Love cemetery near Rocky River. There, too, is a patch of iris …similar in shape and flower. I wonder if the flowers from the two locations share the same source. Are they genetically related? Related by the same families who loved them so?

This story is not centered solely on irises. You see, not long ago I witnessed a Facebook user group discussing old chimneys standing guard in memory of failed home places. With the dwelling structures having long since disappeared, it seems there’s now a similar epidemic inflicted upon the remaining masonry. Folk on the web site were expressing pity that the grand ole homesteads were all but gone. But the community conversation overlooked something important. The remaining brick still lie scattered across the fields of our American south. Unused and unwanted, they are there, accessible and in need of a little respect. They should not be picked up and hoarded for personal gain though I can imagine community monuments based upon piers constructed of the old brick.

Here’s my idea: each brick could be catalogued and etched with a number keyed to the family home from which the brick came. What a way to honor the people of our past! People visiting such a monument would not only receive the intended message, but could also see that their ancestor was a part of the community. From slave to prominent citizenry, bricks offer one of the best surviving elements we can draw upon to symbolize their existence. Monuments, like the keep sakes in our homes, are put in place to connect us with our past.

For me, this idea of bricks and of the architecture of landscape is personal. My father always thought hard about the matters of land. He served in England and brought back inspiration after seeing many a English garden. After dad’s passing, I made visits to any cousin, close or distant, who would listen to my incessant hunger to learn more about family. It was during such a visit to my father’s first cousin, George Houston Thomas that I learned of an important family artifact. I’ve always heard that my family made bricks at a kiln along the banks of Island Creek. However, from George Houston Thomas I was gratefully given a photo of the family “boys” actually making brick. The photo wonderfully connects me to another day and time though falls short in a physical sense.

As with others in his family, my grandfather’s home was made of wood cut on the farm with the chimney being constructed from the clay under his feet. The old home place stood from the early 1900’s until years ago when my grandparent’s farm was sold. It was eventually burned as practice for the volunteer fire department. I was there the day before the fire and was given permission to walk the land …to gather up any articles I wished. At that time the chimney was still intact and the home standing.
Looking high and low I was able to scrounge about 50 bricks in total. Some of which had markings of thumb prints while others showed the flashes of color inflicted by fire and uneven heat.

Today, I’ve devoted part of my bounty of bricks towards the making of a small flower bed near my front door. The flower bed is filled with daisies and there are also zinnia seeds planted and ready for the heat of summer. Sadly, though, I have no Iris from my childhood memories, and I failed to bring back plants from Arkansas. This loss was rectified during my honeymoon, as my wife and I paddled the waters of Moccasin Swamp (what a name!) in Johnston County. Deep in an eastern North Carolina cypress swamp we came across a great hollowed tree surrounded by stagnant water. Protruding from a hole in the tree, a wild variety of flower called Iris Virginica presented itself to me and my wife. It’s commonly known as the Southern Blue Flag iris. Beyond its natural beauty, and finding it in such a remote habitat, the flower also serves as a reminder that many of my ancestors in southern North Carolina once lived along the waters of Moccasin Swamp. William Gurley of Anson and others once owned land along the water.

Remember that all the knick-knacks, pictures, and heirlooms filling our homes are placed with care, reminding us of many great things. Their value will last as long as their relevance is appreciated. And from me to you, I ask that you not limit your family history to only the written word. Include your family in the architecture of the garden. Share plants and strive to perpetuate the love they’ve inspired. There are many simple ways our gardens can be used to speak on behalf of both those we love as well as family we’ve never even met.