In this post I’m finally powering up in preparation of working an area of Anson County that I’ve dreaded. It’s a place where land disputes gave rise to one of the most impactful Supreme Court Cases I’ve seen. I become exhausted reading through the more than 75 pages of deposition. That, and there’s the accompanying survey plat that’s one of the most extensive I’ve ever viewed. Already hesitant to wrap my mind around the aforementioned case, again this week I stumbled across yet another legal action, further expanding the scope of this story.

Early on, Anson and Mecklenburg Counties joined in what is now eastern Union County. And, in the western edge of old Anson flowed a stream by name of Negrohead branch. It emptied into Richardson Creek from the south.

Recently changed to Salem Branch, local lore says the stream may have been named for a slave whose head was piked as warning to others. However, a more plausible origin can be found in the large blackish rocks lining the creek banks. The rocks may be the same type as those my dad always referred to as “bullhead rocks.” In all of this, and for sake of civility, I’m simply glad that the stream name has recently been changed to Salem Branch. Please note that I’ll continue to use the term Negrohead in this post as it’s the name used officially in historic documentation. I mean no disrespect.

Looking first at the case I found this week, I hope you will take time to study the survey plat along with the legal land descriptions that follow. And while in your studies I ask that you put yourself in my place. Knowing that it’s my goal to reconstruct the land records of early Upper Anson County, imagine the effort it’s going to take to rejoin and make sense of such convoluted title history. My concerns are rooted in the effort needed to make sense of all this while realizing some mistakes were legally dealt with while others were resolved simply with the passing of a buck or shake of the hand. I’m not alone in my troubles as I am only walking the path of mistakes made by others in the distant past. Whether based in greed or some simple mathematical error, ancient mistakes in calculating or recording land have a way of wreaking havoc on our understanding of the past.

The below is found in the Union County civil action papers relating to issues of land. In this case John E. Austin who was born in Wake County, the son of Charles and Phereby Bunch Austin, intended to sell several granted and otherwise deeded lands. The buyer was Simeon D. Pembleton who on 6 May 1851 married nearby Mary A. Treadway, daughter of John Treadway. I’d never bring up this extraneous information though a Google search of Simeon netted an interesting story titled “Counterfeiters for the Good.” From a newspaper article concerning runaway slaves Simeon D. Pembleton is mentioned thusly:

“No doubt now remains but Simeon D. Pemberton, of Anson County, is the rascal who procured these passes for my negroes. It may be that the counterfeiter, Geasling, of Rockingham County, who was whipped and imprisoned at Wadesborough, wrote one of the passes.”

Now, let’s get back to the land transaction between the above John E. Austin and Simeon D. Pembleton. Because several of the tracts granted impose on others and also due to a complicated title history, it was ordered by court hat a survey be made. The plat and legal descriptions are as follows:

Below is a map showing the fork of Zachs Branch along with its location on the run of Negrohead branch. Before moving forward realize that today the Creek is called Jack’s Branch. And, in the early Union County map the branch is identified as Jackson Branch. Must of the land grants identify the branch as Zacks with but one or two tracts being identified as lying on Jacks. The above lies within the area tinted red. Downstream I’ve tinted the map yellow. The following case resolved in the North Carolina Supreme Court involves much of the land tinted yellow:

Now let’s look at a survey plat of land concerns from the Supreme Court case Ennis Staton vs. Jacob Mullis. When looking at the following image note that many years ago I went through the file and remember seeing a fabulously water colored original that is no longer there. The below is a printed copy from the officially bound North Carolina Supreme Court Records.

Does this look complicated?  Take a look at the brief heading description for this case:

To get an idea of the complexity, I’ll leave you with the following. It’s just one of many pages within the case records. 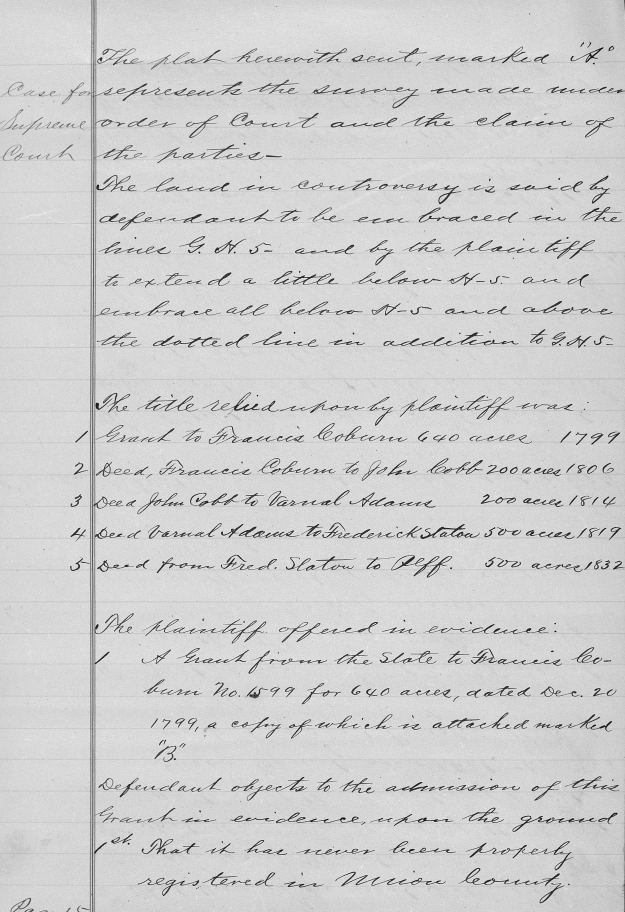