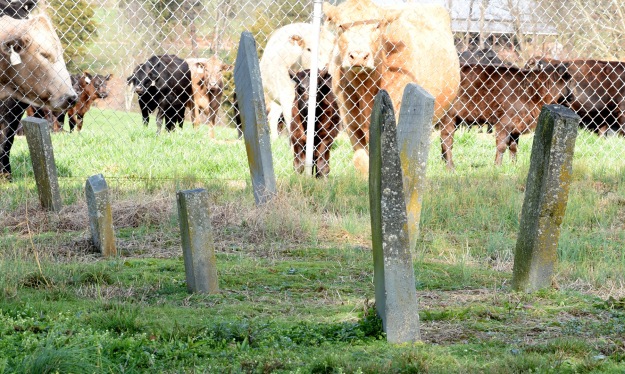 Staring across the grassy fields, I can imagine the goings on of early generations of settler. I’ve studied for years and feel in tune with their changing community and of the people who once lived near what is now the Edmond Davis cemetery. And realizing this was my ancestors’ final resting place, I know the story is not complete; there‘s more to be found and more story to be told.

Take a look at Edmond Davis cemetery … zoom in, zoom out and see the fields I see. The southeast corner of the cemetery is the place where my Thomas family is at rest. Edmond Davis and others are at rest under great cedars in the northern portion of the graveyard. And see the white spot midpoint of the west-most fence line?   That’s the resting place of Lorenzo Merriman Little, a member of Jesse James’ Gang who was on hand 13 Feb 1866 in Liberty Missouri for the first daylight bank robbery in the United States.  More on Edmond Davis cemetery can be found on Julie A. Hampton’ site.

While putting together the title history for lands around the cemetery, I happened across the following deed (left) dated 1821 in which James Baucom conveys 100 acres along Gourdvine Creek to William Holly. The tract originated as part of a land grant entered 1797 and issued 1811 to Frederick Taylor. Though my next post will delve deeper into the title history of the surrounding area, this one deed opens the possibility that Edmond Davis cemetery was more than a family graveyard. As highlighted in yellow, there must have been a “Meeting House Ford” on the waters of Gourdvine and I can only imagine there was also a meeting house nearby.

This is new and big as it does not relate to any known church histories. Well over 10 years before the founding of Jerusalem Baptist and more than 30 years before the founding of Olive Branch Baptist, we now know another church existed in 1821. It’s not Rocky River Baptist as it’s too far away. Let’s look back at the grant, neighboring lands and later conveyances to see where this all fits in today’s landscape.

In the illustration to the left, the Edmond Davis estate lands and cemetery are identified as a red shaded area. Frederick Taylor’s 1811 grant for 300 acres is lined in blue and adjoins the lands of Richard Lee as is written in the warrant for survey. You’ll also note another tract granted to Jacob Gurley. It’s in that tract where I believe the “Meeting House Ford” once crossed Gourdvine creek. Here’s a short title history of the land originating in the Frederick Taylor grant:

… above the Meeting House Ford. Hmmmm, … as water runs downhill, the ford should cross the creek within the adjoining tract downstream from the land originating in Frederick Taylor’s grant. Entered 1797 and issued 5 Dec 1805, Jacob Gurley received 100 acres adjoining Michael Austin’s lands on both sides of Gourdvine at the mouth of “Buck Branch.” Nobody today knows anything about Buck Branch though a branch does rise just below the cemetery before making its way to Gourdvine below Olive Branch road. Here’s a look at the conveyances of this piece of Jacob Gurley’s land:

It’s my belief that at some point from 1800-1820, a Baptist church was organized and built on the hills above Gourdvine creek. In 1821, at the time James Baucom purchased land from Obediah Curlee, the church and graveyard (now Edmond Davis cemetery) must have already begun to serve numerous families in the community.

As Baptists are social in order, survival of the church was dependent upon the clout and leadership of a few families. Something happened to this dynamic causing change. What could have happened?

We’ll never know for sure though the 1830’s and 40’s were hard. Migrations west carried away many and there was also disease and death. It’s important that my own David Thomas’ lands at least adjoined the cemetery and that he and his wife both died in the early 1850’s. Baptist minister and uncle Edmond Davis oversaw both the estate and orphaned children. In 1857, he bought David Thomas’s land that adjoined the cemetery. And then in 1858, Edmond Davis and others provided notification that Olive Branch Baptist church was to be built on Henry Baucom’s nearby lands. See Julie A Hampton’s site.

The church grew strong and Olive Branch as a community was formally incorporated in 1875. Though Olive Branch Baptist church had its own cemetery, the old graveyard by Gourdvine creek continues its service through today. Why has it survived and why did they name the new church Olive Branch? A sign, a branch of peace, there must have been a very real reason. It’s my belief the name was a way of bringing together a community that had been divided by death, migration or social conflict. It’s only a guess; it’s not meant for us to know for sure.

3 thoughts on “RELIGION ON GOURDVINE: PART 2”