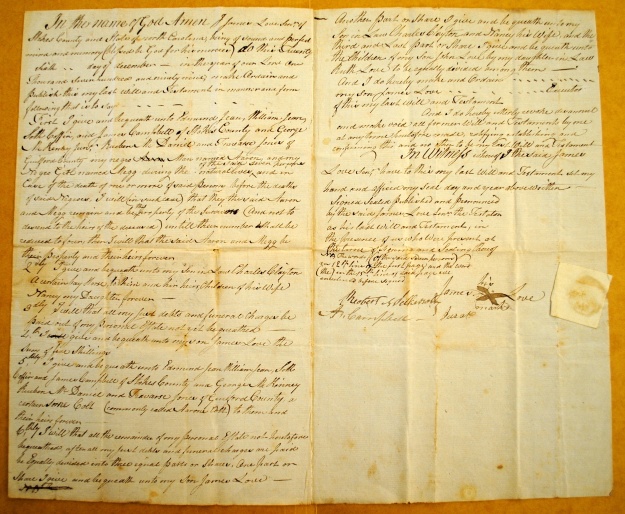 A slave with no record illuminating his walk on this earth, he was likely living under the hand of James Love when the census was taken in 1790 Stokes County NC. As the century came to an end, his master’s life began to fail and we are first introduced to the slave named Aaron.

In 1799, on the day after Christmas, James Love acknowledged his earthly mortality. Writing his last will and testament, not only was James firstly concerned with two slaves, he was also interested in the security of their prized colt: 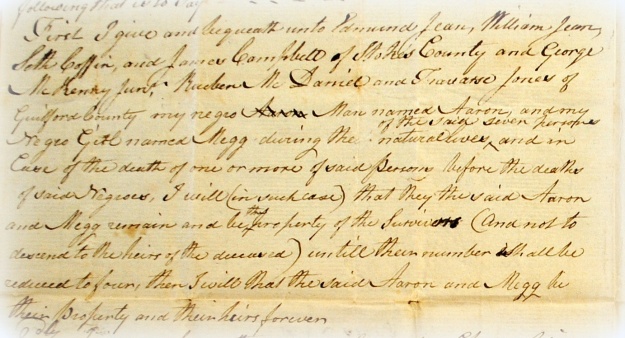 Who were these seven men and why were Aaron and Megg willed to them in such manner and form? As it turns out, the men were trustees of a church founded by James Love. Just two years prior to the writing of the will, on 13 Dec 1797, Thomas Tucker and wife Ann deeded one acre of land (3-96, Stokes NC) to James Love Senr., Edmund Jean, William Jean, James Love Junr., Edward Cooley, Robert Fulton, and Archibald Campbell. As trustees of the Methodist Episcopal Church, these seven men had received the gift deed for one acre situated on Rocky Branch of Muddy Creek for the purpose of erecting a meetinghouse. Two years after the deeding of land, Methodist Bishop Francis Asbury wrote of his visit to Love’s Methodist church:

1799 on Monday, October 7. We rode through Stokes County, and attended meeting at Love’s church, which has glass windows, and a yard fenced in.

How deep was James Love’s conviction? Reaching the end of his life, was he preparing a home for his body after death? Was he building legacy and was all this happening because he had finally accepted his earthy mortality? Were these the actions of a man who was making up for lost time or were these the continuation of the good life he had always lived? These are important questions as they get to the heart of James Love, master of Aaron and Megg.

At this point I could write stereotypically about the wrongdoings of slavery and spend time putting meat to a story of festering hurt levied long ago. But in this case, I’m not sure of the depth of hurt; I’m really intrigued with Aaron’s walk to freedom. Were James Love’s orders in his last will and testament honored and how does this story play out?

Probated January 1800, James Love didn’t live long after penning his will. The story of Aaron remains quiet until three years later a Moravian Minister wrote the following in his journal:

15 February 1803. It was noted that the Negro Aaron Moses, who has been working in the tanyard, must be sent away, as certain persons who lay claim to him are seeking to take him by force.

Apparently while under the hands of the seven leaders of the Methodist church, was this an actionable order? Who was coming to lay claim on Aaron and where did they end up sending him? History tells us that the tanyard in the Moravian town of Salem was an early hub of industry for early African Americans, both slaves and free. Did Aaron live and work in Old Salem, or are there other possibilities? Note that William Jean, one of the devisees of James Love’s will is known to have preached at Doubs Methodist church in present day Pfafftown. The site of one of the earliest Methodist Camp Meetings, founder and German immigrant John Doub was also by trade, a tanner.

Later in 1803, the life of James Love and the walk of his slave Aaron were greatly illuminated through a series of emancipation petitions filed with the North Carolina General Assembly. The first petition depicts James Love Senr as an aged, but kind and thoughtful person. It was his wish that the two slaves Aaron and Megg be freed to become known as Aaron Moses and wife Mary Madeline Moses. We also learn that Aaron lived in “Salem” indicating he likely worked at the Moravian tannery. And based on timing, I’m of the belief that Aaron Moses served prominently as a guiding force for other slaves. Note that the petition included separate signature lists for the seven devisees (minus Edward Jean as he had since died), relatives and descendants of James Love deceased, and friends and neighbors. From the list of family, there are few names that I cannot connect to James Love. The devisees of James Love’s will indicated it was his will that they find freedom for the two slaves. Being late in the life of James Love, there had likely been no time for him to grant freedom properly through legal emancipation. And a second petition by citizens was signed entirely in German script. Note a leislative bill has not been found showing that the petition for emancipation was acted upon.

These records are wonderful and really help to tell the story of both my ancestor and of those who were held by him in slavery. But as you might surmise, there’s no further record in North Carolina to advance the walk of Aaron Moses and is wife Mary Magdalene. What happened to them? I can imagine what wonderful Christian souls they must have been. And as for me, this has been a powerful spiritual experience tracing the paths of the couple named Aaron Moses and Mary Magdalene. As hard as I tried, the story came to an end with the filing of a petition. All was quiet until much later I received an Email from a very distant cousin whose name has sadly been lost. Please gather your thoughts as I move to close this post.

Note that James Love Senior’s son John Love died ca 1789. John had sons John Crook Love and James. In the early 1800’s, the younger James and children of deceased John Crook Love moved to Indiana where Love’s Chapel was founded in the town of Loogootee IN. I’m not going to take the time in this post to outline who lived nearby and are buried at the ancient cemetery. To be honest, I’m not sure as it’s a long way to research from my home in Raleigh NC. Anyhow, family in Indiana did not remain there. At some point they followed migrations west with some settling in the state of Kansas. It’s through Email from a member of this family that the story of Aaron Moses is possibly reopened. 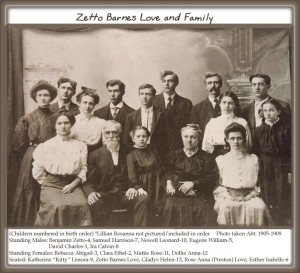 Born 1850 in Indiana, Zetto Barnes Love died in Reese Kansas where he was patriarch of a large family (see picture above.) As was conveyed to me, a relative (possibly a sister or aunt) made and provided a written account of the trip from North Carolina to Indiana. Not certain whether it is original or a second hand outline, the account below identifies the starting point as east of the Appalachians. Naming Zetto Barnes Love, the account must also be rooted in his family. To my amazement, a note in the upper right corner indicates the family moved from North Carolina in order to free a slave. Could this be Aaron and his wife Mary Magdalene Moses? The early 1800’s were a time where moral debates around the keeping of slaves split many families. 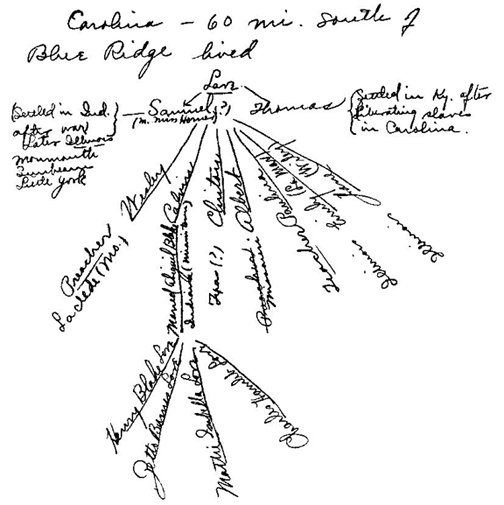 Seeking the promise of a better life in Indiana, Quakers and others holding anti-slavery beliefs migrated in mass from the areas of Stokes and Guilford counties NC. It’s possible that Aaron Moses and the family of James Love Senior made this trip north. I’ve looked hard and can’t find any further trace of Aaron Moses. He may have remained here in North Carolina. He may be buried in the hallowed grounds of Loogootee Indiana. Though we’ll never know for sure; we do know he made his mark on life.

5 thoughts on “THE WALK OF AARON MOSES AND MARY MAGDALENE”