His life was a great adventure! The son of George A. and Mary Dove Keiser, Thomas Dove Keiser was born Nov 20, 1793 in a portion of Mecklenburg County NC that would soon become Cabarrus. He married in 1812 Mary Gurley, the daughter of James and Lydia Gurley. James was the son of William Gurley who settled ca. 1778 alongside my THOMAS ancestor on Richardson Creek in Anson County NC. In 1828 Thomas Dove (T. D.) Keiser and family removed first to Tennessee before journeying on to Arkansas.

With T. D. Keisur helping to lead the way, on May 20, 1843, the family loaded the wagons once more and joined the great Applegate wagon train to Oregon. Settling along the Willamette River in the Pacific Northwest, the region was not yet governed under the jurisdiction of the United States. A community based security force known then as the Oregon Rangers was quickly raised. Thomas Dove Keizur was chosen and served as first captain in this precursor to the United States National Guard. He continued a life of civil service benefiting the new state of Oregon along with the town that now bears his name.

As is the way with most of history, I never knew of T. D. Keizur until his story came to me by way of the works of others. During the Christmas holiday in 2009, a Keiser family member contacted me in advance of a major celebration about to take place in Oregon. On January 30, 2010, the little town of Keizer Oregon unveiled a bronze monument of Thomas Dove Keisur seated atop his faithful Morgan horse. Historian and author Jerry McGee provides a historic presentation on T. D. Keizur and the town.

In 1780, Henry Kent sold land on Utley Creek (F-1, Wake NC) to Davie Strait after relocating briefly to Mecklenburg (now Cabarrus County NC). Deed 11-31 in Mecklenburg NC identifies Henry’s land as lying on “the waters of Rockie River Nigh the Baptist Meeting House.” This was an intriguing find as it tied to my LOVE family while illuminating the migration from an area of northeast North Carolina where my THOMAS family may have once lived. More on these ties in a later post.

Believing land records had pointed me to the old Baptist church, I contacted the land’s present owner and was graciously shown the way to what I sought. Followed by an inquisitive herd of cattle, we walked a grassy ridge that provided panoramic views of surrounding pastures and the distant Rocky River basin. Rising to the north, and flowing around the land, was a spring head identified in early deeds as feeding “Meeting House Branch.” Eventually we reached an ancient hilltop cemetery in a small grove of trees. Though well taken care of, time and life had taken its toll on the graveyard. Just a few stones revealed readable words such as “the” or maybe “here.” The following is a digital image of the only surviving stone with words crying out to be deciphered.

Further research revealed this to be the site of “Haynes Meeting House.” Lutheran minister David Henkel preached at Haynes Meeting House around 1800 and it’s also identified as the burial place for members of the Howell family. Found also in local land records, namesake William Haynes removed to western NC by 1785 and became the first preacher at Bill’s Creek Baptist Church located near present day Lake Lure. 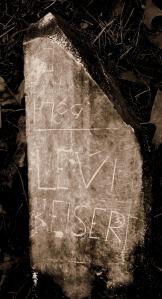 Frequently visiting the site in search of things possibly missed, on one such trip, the door of discovery opened once more. Partially buried under leaves and debris, a small stake of a rock identified the resting place of Levi Keiser. From the works of Marie Evans Davis-McQueen, I learned that Levi was born Feb 16, 1783. The son of George Alexander and Mary Dove Kiser (Kiser – as tradition spells it in NC legal records), we now know the little fellow died Feb 11, 1789. Not long after the death of little Levi Keiser, his brother named Thomas Dove Keiser was born November 20, 1793. And since Levi’s mother and father lived out their lives in the area surrounding the graveyard, it seems they would’ve wanted to be buried there, near their son. I couldn’t help but imagine that they and others in the family were buried nearby.

After learning of the amazing life journey of Thomas Dove Keiser/Keizur, I decided to revisit the old unreadable stone with an open mind to variations in naming. Amazed at what I now see, I’m almost certain the stone marks the resting place of T.D.’s and little Levi’s father.

When I visit that hallowed ground off of Hwy 601 in Midland NC, I think of journeys and of how all things are possible. There was of course the trip to Oregon and the Gurley family’s earlier migration from Johnston County NC. It’s wonderful getting to know the wealth in community and how it was served by this little church named Haynes. Though he never got to meet his younger brother Thomas, I’m sure little Levi would have been proud of his life’s journey.

9 thoughts on “The Trail to Oregon”