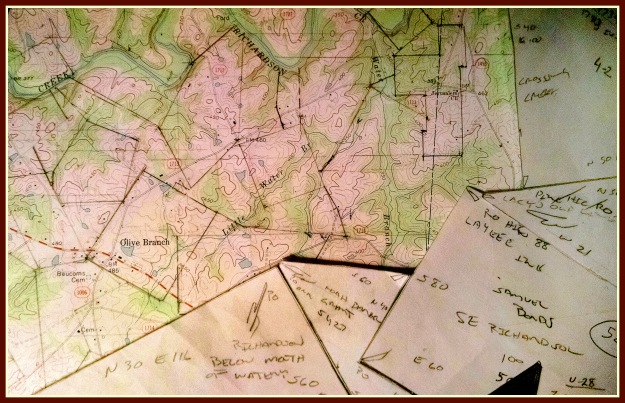 I really get excited studying land records as the story I’m wanting to tell changes with each new owner. Up to now I’ve centered on Adam Garmon, Joseph Garrott and Burdig Howell, and of their interests in a tract of land encompassing today’s crossing of 24/27 over Rocky River. A future owner moved from this, the lands of my mother’s ancestors and turned south to Anson County where his influence certainly impacted those living near my father’s ancestral family.

Sounds confusing, huh? Early on, I believed what I was seeing in this tract would end up being important. Through land records, I’ve been able to identify a possible church presence in Anson County that may predate recorded history. Before digging into this important post, let’s take one last look at the early title history for our tract of land along Rocky River at the crossing of Hwy 24/27. 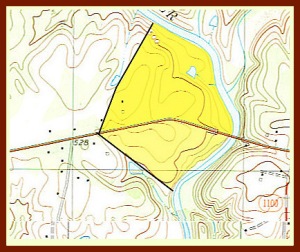 In 1779, William Mitchell sold this tract to Leonard Green who I firmly believe moved from what’s now southern Wake County where he was listed in county road orders. He must somehow be connected with the families of Richard Green and Gideon Green who settled in Anson and Montgomery Counties. As I’ll dedicate more time on Leonard Green at a later point, let’s move beyond the conveyance by Leonard and wife Ann to Samuel Bonds.

Samuel Bonds bought the tract at the crossing of Hwy 24/27 in 1780. A time when the Revolutionary War was just reaching the south, I suppose he lived there until selling the land in 1789. Not appearing in the 1790 Mecklenburg County census, Samuel shows up in Anson County where he received a land grant. Entered 15 Jul 1793, and issued 9 Jul 1794, Grant 5038 Anson NC was located on the south side of Richardson Creek where it adjoined lands of Layce. Shortly after, on 19 Jan 1795, Samuel Bonds purchased 54 acres on Richardson above No. 4 from Charles Calloway of Rockingham County NC (Deed C2-481 Anson NC). Witnesses were R. Galloway and Chappell Bonds. This land was originally owned by Henry Eustace McCulloh, a British land agent responsible for most of the development in western NC. Charles Galloway had acquired the tract from Thomas Clark who received it via the following Secretary of State grant of confiscated lands: 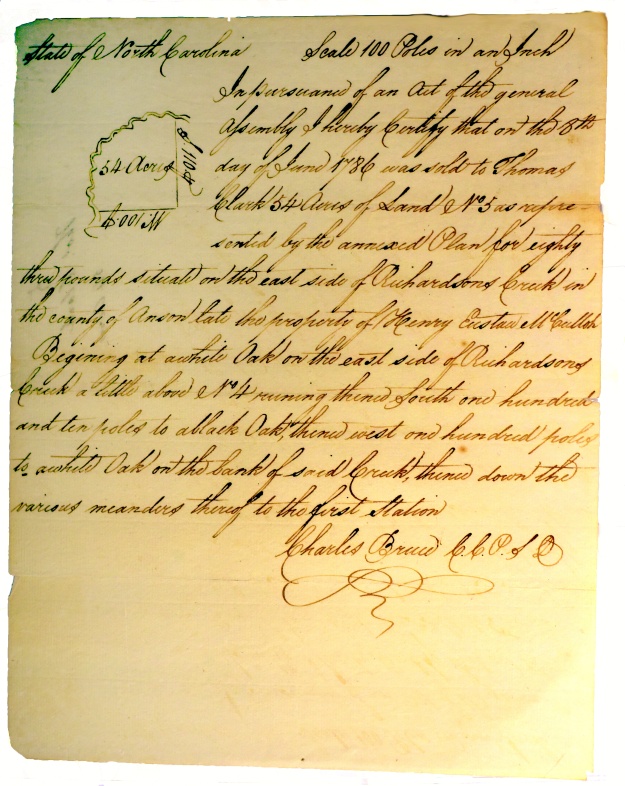 Samuel Bonds was on the move again as he’s enumerated in the 1800 Kershaw County SC census near sons Chappell and Seth Bonds. From the footnotes in Leah Towsend’s South Carolina Baptists 1760-1805 reads:

So, we now know Samuel Bonds was in SC as early as 1784 where church records list him as minister of Lynches Creek Lower Forks Baptist Church from 1795-1998. Per historical marker, and constituted in 1789, the church held early meetings at Lower Fork of Lynches Creek, Boggy Swamp and Witherinton´s Mill. By 1798, the church was located as mapped below and its name was later simplified to Gum Swamp Baptist Church. Of interest, Samuel Bonds proceeded Rev. James Hudson who was minister at Lower Lynches Creek in 1794. He was also listed as minister alongside Samuel Bonds in 1795. James is likely the son or close family member to Joachim Hudson who lived close to Samuel Bonds along Richardson Creek in Anson County NC.

And further information from the diary of Rev. Evan Pugh:

From May, 1789, to May, 1797, Mr. Pugh generally preached the first Sunday in the month at Black Creek. Rev. James Coleman, licensed preacher and messenger of the Cashaway-Mount Pleasant Church to the Charleston Association in 1795, was meantime working at Black Creek branch which was constituted a separate body on August 11, 1798, with eighteen members, by Rev. Messrs. David Cooper and Samuel Bonds. Black Creek immediately asked Mount Pleasant to give James Coleman a letter of dismissal, and on November 30, 1798, a presbytery consisting of Rev. Messrs. Samuel Bonds and David Cooper ordained him as pastor of the new church. Mr. Coleman, together with Charles Williams, secretary of the church, appeared at the Charleston Association meeting of 1799 and secured admission. Black Creek Church showed strong effects of revival.

There is no note of a meeting at Gum Branch until July 13, 1798, but the records are incomplete for the intervening year. At that time, bitter dissension had arisen in the church because Brother Samuel Bonds had brought an accusation of forging an order against the son of one of the members and had had a warrant made out against him after the charge was apparently disproved. This many members thought unchristian of their pastor. Brother William Witherington refused to commune, said he did not consider himself one of the church, and also declared that if the land had been his over which Rev. Mr. Bonds had opened a path to the meeting house he would “check him with the law.” Fellowship was withdrawn from Mr. Witherington and a presbytery consisting of James Coleman, John Sanders, Pigg and Waddill justified Mr. Bond’s conduct, but the church was dangerously near extinction due to this and a later breach. Mr. Bonds soon left.

Where did Samuel go from here? His sons are found later in Lee County GA. And printed in Tarorough NC, the following highlighted letter from his grandson appeared in a 1845 publication titled The Primitive Baptist: 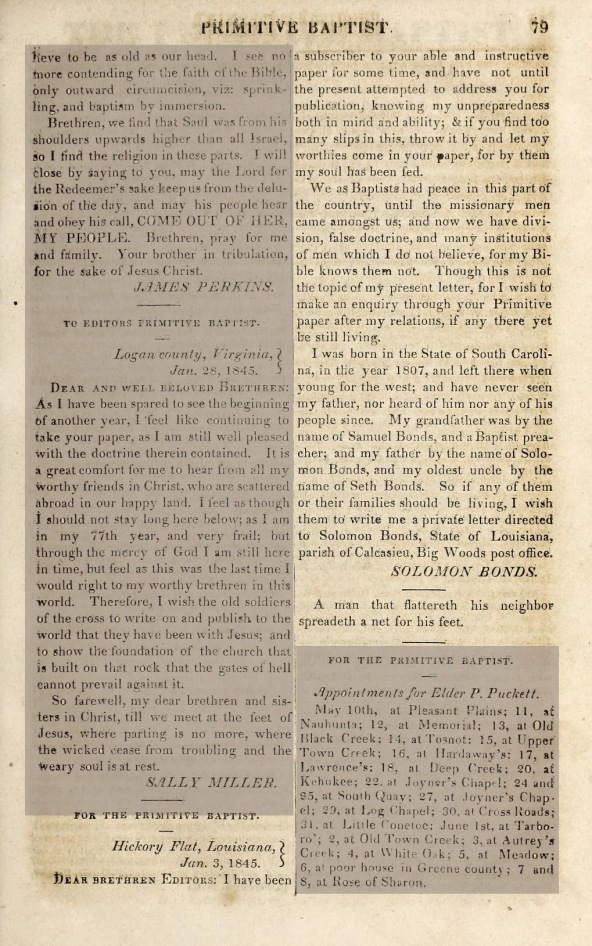 It’s time to bring this story to an end, so let’s conclude with a review of related records in North Carolina.

Firstly, knowing Samuel Bonds once lived just below Haynes Baptist meeting House, was he involved or likely even a minister at the church? Was that the start of his spiritual journey? Was he at all connected to Meadow Creek Primitive Baptist Church, an early church just across the river? Note that Persilar Bonds was mentioned in that church’s minutes:

1803 – Persilar Bonds was excluded for lying about potatoes.

Not the most flattering of entries, is there any possibility Persilar Bonds is related to Samuel? I dunno…

And moving to Anson County, we’ve discussed a deed for land once owned by British Land Agent Henry Eustace McCulloh. I’ve yet to physically locate the land though Samuel Bonds Grant 5038 Anson NC ties to a historic old church: 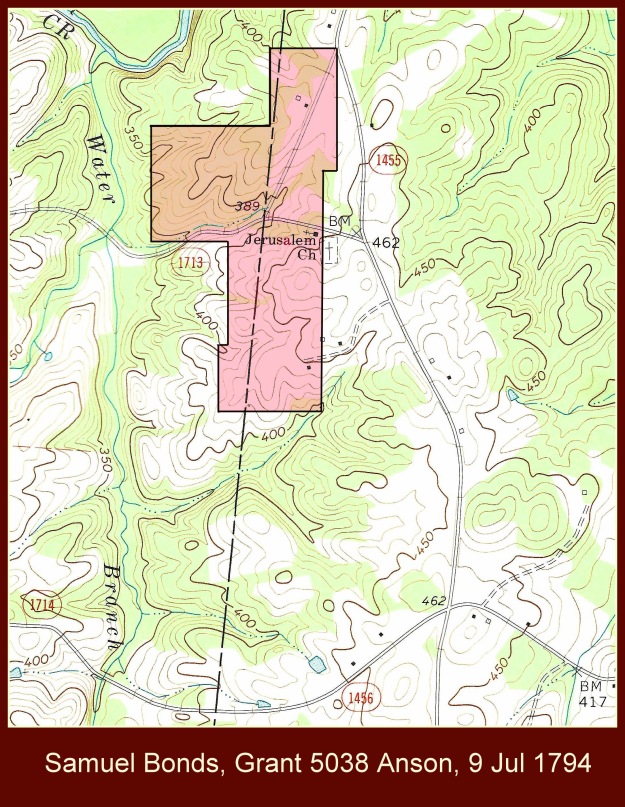 The above was issued to Samuel Bonds in 1794. Of all places, the tract clearly encompasses present day Jerusalem Primitive Baptist Church. Note I’m early on in my mapping project, so this could easily be off enough to where the old church may lay outside of the land bounds. Also, though there’s no record of Samuel Bonds later conveying the land, a search through deeds reveals an interesting title history:

It’s believed that Jerusalem Primitive Baptist  was formed in the 1830’s. Is it possible that Samuel Bonds was involved briefly in a meeting in the same location that predates Jerusalem? Could something that began in his day and time have been instrumental in locating Jerusalem Primitive Baptist church where it stand today? I truly have no idea but have enjoyed the chase, of learning how the life and actions of this one person could cross county and state lines raising such possibilities.