From a memorable drive with fellow history buffs through Stanly County exploring the homelands of our Burris family past, I remember the hearty discussion as we drove east on Hwy 24/27 passing Liberty Hill Church Road.  It was at that point I asked the gang if anyone remembered a barn that once stood near the intersection. Somehow, my mind recorded the spot as being the place where a photo of my grandparents was taken during a 1910’s wedding celebration. 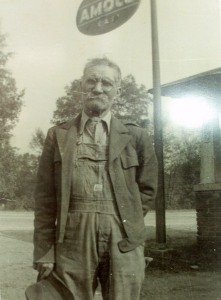 Pam and Brenda had a good time sharing collective stories of our distant cousins.  Filled with joy to be a part of this time of reminiscence, yet, it was at the moment we passed over the bridge that curiosity drove me to wonder why the store and old road intersection once stood so close to the creek? It didn’t make sense and I knew there must have been a good reason. Time passed and at a later date, Brenda shared a photo of Pettticord at work at his place of business (right).

Some months later, I went to a Wake County Genealogical Society Meeting where member and guest speaker David McCorkle spoke on map resources.  David created the site nclandgrants.com which is a super valuable resource for those of us working the early land records of our state.  And as it turns out, David and me are actually cousins as he descends from Headley Thomas, brother of David who is my second great grandparent. David McCorkle is also an Austin descendant which, as you will see, plays into this post.

In his presentation, David introduced the group to the interactive maps found on the UNC site titled North Carolina MAPS. This is a tool that allows the user to fade and merge various maps for purposes of comparison.  It’s nice to see an old 1800’s map overlaid on top of a present-day road map. It was a good night as I learned a trick that would surely be useful in future research. And then, occurring some time later, I revisited the site David showed us. It was in that effort that I came across a 1916 Stanly County soil map overlaid atop a recent county road map. Just click “Fade Historic Map” to the left on the page and you will be able to zoom in to see the small cropped section below. Notice at one time the bridge over Stony Run Creek served as crossing point for not one, but two roads. And note on the image below that I’ve placed a red dot at the intersection where the two roads cross Stony Run.

In the image above, you can see the old road intersection “on” the bridge and another just to the west showing the modern intersection of Liberty Hill Church Road and Hwy 24/27.  You can also see the old network of roads along with the blue markers indicating modern-day places of business.

On two separate adventures, both heading out from starting points at Pleasant Grove Baptist Church, I remember the drives up Frog Pond Road, when almost immediately Pam pointed to an old path leading south.  She spoke of Hinson land and of a cemetery nearby. Looking at the old 1916 map above, you can see the path was once the road that crossed over Stony Run before heading northeast towards the church. Today that road is gone, and yet, those who are at rest nearby likely knew of it well. Looking back in time, I have to wonder if doing away with the section of road was a means of keeping peace between two closely located churches? hmmm…

Doing a little digging in Newspapers.com, according to a February 2,1902 notification in the Albemarle newspaper The Enterprise, it appears that several sections of various roads were discontinued at that time. They including Austin Road from near Pleasant Grove Church to Stony Run:

“ a petition ….to discontinue the old road, and the Austin Road from
D. C. Hinson’s store to Stony Run Creek”

Today we study our family histories and we look at the paved black-top roads around us as if they have real relevance to our distant past.  Sometimes they do, and sometimes not. We think we can place our kin on them as if today were yesterday. It is not as the roads are not always as they once were. Time changes all and to really understand where family lived back in time, we must be willing to overlay every resource imaginable, …maps included, in order to glean clues from the shared foundational elements of our past. Only at that point can we begin to ask the smart questions. Hmmm  …in the above, which came first, the road running west to east or the one crossing Stony Run as it heads towards the northeast? That’s a smart question and what stories do the two roads have to offer?

As it turns out, the road crossing Stony Run in early deeds is identified as “Austin Road,” now Newsome Road, as it passes almost due north beyond Pleasant Grove Baptist Church. Another road running by the church towards the northwest is present-day “Frog Pond Road,” known in deeds as the “old Concord Road.” (See below) 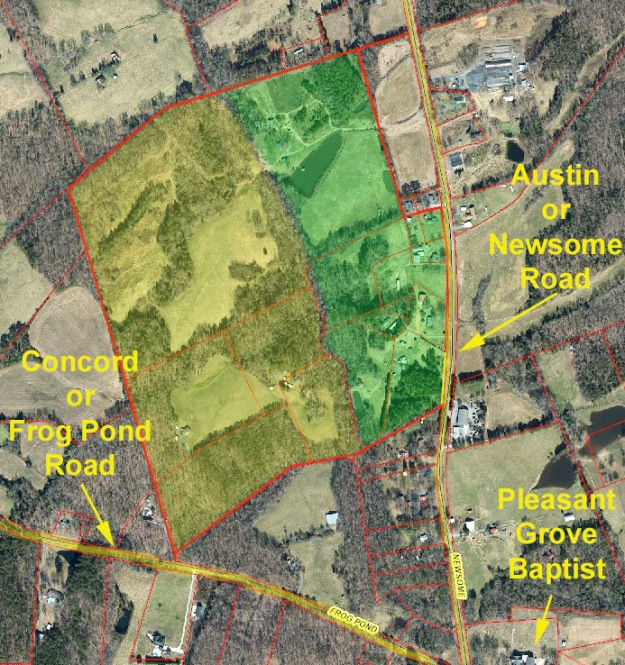 The GIS mapping image above shows two pieces of deeded land from David W. Burris and wife Sarah. Deed 29-282 Stanly is for land going to Timothy C. Burris. Shown in yellow, the southwestern corner of that tract is identified as joining the “Concord Road”. The green tract Deed 53-416 Stanly went to William A. Burris in which the southeast corner is identified as lying on Austin Road. Note that the branch separating the two tracts is identified as Whitley Branch.

Somewhat disconnected from records showing the road passing over Stony Run near the intersection of Liberty Hill Church Road, today Austin Road officially meanders to the north across the heart of Stanly County, beginning north of Locust and ending near New London (right). However, Austin Road appears in records following that path as far back as the mid-1800’s, and yet, “Austin Road” is also mentioned in records much further to the south. The story and origin of Austin Road may have once been important though I believe its meaning has been altered and lost in part through time.

Looking at present-day Hwy 205 between Rocky River and Oakboro, several early land records refer to that stretch of the road as also being called “Austin Road.” I could show you the platted tracts but will instead wait to tell that story on another day. Anyhow, it makes big sense that the road originates to the south as a large enclave of the Austin family first settled on the south side of the river where Hwy. 205 crosses Rocky River into Union County.  Also, this stretch of Hwy 205 leaves the river to Oakboro where it follows Main Street northward. There, its present-day name changes to Oak Ridge Road.  Towards the end of the 1800’s, deeds indicate that Hwy 205 followed Oak Ridge Road well north of the present-day town of Red Cross. However, going back further in time, the road was known as “the Ridge Path.”

So, from Red Cross north, there was once the Ridge Path.  And splitting off easterly from Hwy 205 to the south in present-day Oakboro was the Big Lick/Albemarle Road, known today as St. Martin’s Road. However, heading to the northeast a short distance north from the start of St. Martin’s Road is Liberty Hill Church Road, named for the church just up the hill from where the road intersects Hwy 24/27.  Connecting gaps of what is shown in records of olden times, we can see that Austin Road once followed Hwy 205 from Rocky River north through Oakboro where it turned northeast. It may have run north across Red Cross but for sure later followed the path of Liberty Hill Road across Hwy 24/27 to near Pleasant Grove Baptist Church. From there, Austin Road may have followed present day Newsome Road north.

Adding one more twist to this twisted roadway kind of story, Newsome Road, being old Austin Road, may have once turned through the woods, crossing Bear Creek to the south of where Austin Road crosses today. From the 1916 soil map, Austin Road could have run the course of Newsome Road much like how it runs today (red line). However, notice the green line. That could have easily once been the run of early Austin Road. Not knowing for sure how it ran, we should keep our minds open to all possibilities. This stuff gets really interesting when maps begin to reveal their iterations of change much akin to what we seek in exploring our families.