There’s a branch north of Richardson Creek called “Stegall”. It was there where in 1799 Solomon Stegall received two adjoining grants of 150 acres each. His neighbors at that time were identified as Rebecca Harrington and some fellow named Hinson. You would think the location of Solomon’s land has been lost as the property lines do not appear on today’s GIS (Geographical Information System) mapping site.  However, with a little training of the eye, Solomon’s lands become clear when looking at the forest and field lines in the above satellite image.

Putting pencil to paper, it is possible to visit what time has almost forgotten. Making that happen, in this instance, our quest to learn more about Steagall’s Branch passes through  a piece of neighboring land oddly having two beginnings.

Back in the 1990’s, a lady from Texas named Karen Griffin contacted me about her ancestor who is named Wiley Griffin. Born ca. 1780, Wiley of Anson served from that county in the War of 1812. He later moved to Cherokee County, Alabama along with neighbors Emory Sharp and my distant ancestral cousin Jonathan Thomas. Late in life, at aged 92 and being in 1871, Wiley Griffin applied for a loyalist claim against the United States government in hopes of recovering the loss of his livestock valued at $968.00. The items were taken by General Sherman’s troops as they trailed the retreating Confederates after the fall of Atlanta.

Karen’s ancestor led an interesting life and in helping her to locate her family land here in North Carolina, I came across a 132-acre land grant in Anson County for Wiley bearing the entry number 0597. At the time I didn’t fully understand land grants …especially the significance of the zero at the front of the file number. Zeros have turned out to be very important so let me explain.

There was a time when all the North Carolina Secretary of State land grant records were poorly organized.  I have no idea as to how bad it was though my mind imagines musty odors and bundles of papers. Around the turn of the 20th century an effort was undertaken in which shucks were labeled with county names, entry, and final issue dates along with a descriptive word or two and most importantly, an identifying “file number”. The file number originates in the orderly listing of entries over time at the point when each was written into an official entry book.

Heck, there are lots of clues in land grants including information hidden within the file number. For example, in Anson County, grant number 1, the first entered, was issued in 1735 for land on White Oak River…wherever that is.  And pulling a number out of my hat, grant number 7000 was issued exactly one hundred years later for land on Rocky River.  From a glance at the size of the file number, one can make a decent guess as to when the lands were issued. But what about Wiley Griffin’s 0597? What do we read into that very different kind of number?

The Secretary of State’s office realized that some of the grants had been entered but had never been issued. Some folks came to the office, paid their fee, and declared the basic location of land to be granted. A surveyor may have even come out to document the land by way of hand-drawn plat. But for some reason, many land histories end there.  Maybe a mistake had taken place and it was later learned that someone else had rightful claim to the same property.  Note that grantees, the fellow receiving the grant, had to sit on the land for three years and make improvements which process makes sense. The delay gave time for any issues to work themselves out without having to involve the court.

For Willie (Wiley) Griffin, the entry date for file # 0597 was in 1827.  From the number, we know that prior to Wiley Griffin, 596 other people had also entered land that was never issued.  That’s a large number!

As for the specific land Wiley entered, the surveyor came out and created a site specific survey plat as appears to the far left below.  From the survey, the land is described as “joining John Coburn & the lands formerly belonging to Solomon Stegall and Rebecca Harrington on the north side of Richardson Creek.”  And then, seven years later, in 1834, Wiley’s friend Emory Sharp entered and was issued virtually the same piece of land …as is seen to the far right below. Indicating a change in neighbors, Emory Sharp’s land was identified as adjoining that belonging to Daniel Smith, Ransom Baucom, and Bryant Austin.  Also, Ezekiel Thomas, father of Emory’s friend Jonathan Thomas served as chain bearer for the grant. Overlaying Emory’s tract on top of Wiley’s (in red), you can see in the middle image how two different surveyors interpreted the land on two different dates.

To make sure you clearly understand the above, Wiley’s land grant entry never reached fruition whereas a few years later, his friend and neighbor Emery Sharp entered the same land which was indeed issued. Knowing the grant was near Stegall’s land, I took a chance thinking it might also be near the branch of same name situated east of New Salem and west of Pleasant Hill Church Road. Sometimes you get lucky and this time the 1830’s grant appears unchanged on the present-day Union County GIS site.  See it below? All those thin black lines represent property boundaries and Emery’s sticks out like a sore thumb.

Anchored firmly on the map, identification of the tract makes it possible to know with 100% certainty that both Wiley Griffin and Emory Sharp of Alabama once had interests in this land.  And in studying the shapes and title histories of surrounding tracts, it is further possible to build a sense of community by using survey and deed descriptions to locate and define the neighboring lands. Using pencil and a topographic map (below), I was able to transfer the hard numbers from old land grant surveys in a manner approximating what we see on today’s GIS map (above).  Note that some tracts are recognizable while others not so much so. That may be due to later agreements between neighbors, resurveys, or issues related to estate divisions, purchases, and recombination. 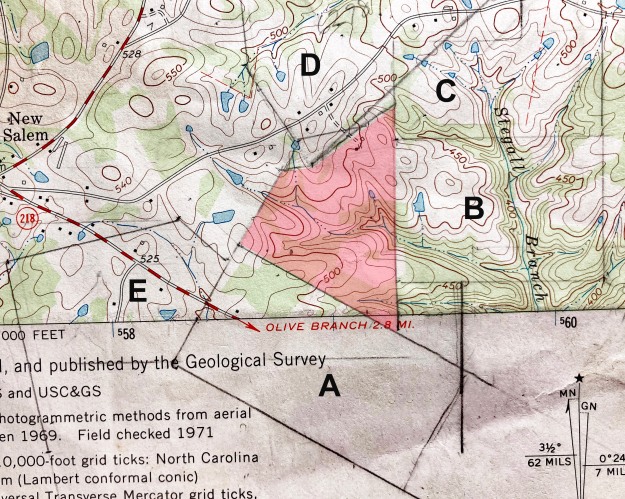 The following is included so you can verify what I have presented.   I advise you to take a look at  nclandgrants.com and the Anson County Online Deed Book as providing source documentation.  You can also check out my mapping pages which carry the platting effort much further afield.

(Shaded Red)  Grant 0597, Anson NC, ent. 7 Dec 1827, (patent not recorded). Entered by WILLIE GRIFFIN but never issued, being 132 acres on the north side of Richardson Creek joining John Coburn and the lands formerly belonging to Solomon Stegall and Rebecca Harrington beginning at a stake Daniel Smith’s Coburn’s corner two red oaks and post oak pointers and runs with the said line south 60 east 52.60 ch to a stake by 3 post oaks, then north 15.70 ch to a stake in his own line two red oak pointers, then west 6.70 ch to his corner post oak, then with his other line north 45 ch to a red oak two post oak and black gum pointers, then south 55 west 50 ch to to a red oak, then south 20 east 6 ch to the beginning. Chain bearers: Daniel Smith, Jesse Coburn.

(Shaded Red) Grant 6965, Anson NC, ent. 14 Jan 1834, sur. 20 Jan 1835, iss. 20 Apr 1835. Issued to EMORY SHARP, being 128 acres on Richardson Creek adjoining the lands of Daniel Smith and Ransom Baucom beginning at a hickory his own corner and runs south 44.3 chains passing his other corner to a stake by a pine and two post oaks in Daniel Smith’s line, then north 60 west 46.5 chains to a post oak Smith’s and Baucom’s corner, then north 31 east 19.1 chains, to a stake by red oak and small post oak in Bryan Austin’s line, then north 82 east 6.65 chains to his corner stake by three post oaks, then north 55 east 29 chains to a stake by three post oaks a black oak, gum, and dogwood in a hollow, then south 13.75 chains to the beginning. Chain bearers: Daniel Smith, Ezekiel Thomas.

B. Grant 5367, Anson NC, ent. 23 Jan 1797, iss. 7 Jun 1799. Issued to SOLOMON STEGALL, being 150 acres on the west side of Richardson Creek beginning at a red oak among three pines and runs west 48 ch to a hickory with two post oak pointers, then south 32 ch in or near Rebecca Harrington’s line, then east 48 ch to a stake, then north 32 ch to the beginning. Chain bearers: John Harrington, Stephen Pool

Looking back to Rebecca Harrington’s Grant 5272, note that if we were to look a bit further south, records not shown would show that her husband Charles acquired a small piece of land much earlier.  Knowing that Rebecca was widow, one must imagine that her deceased husband lies at rest nearby.  Such information gives us important clues when trying to identify the ancient cemeteries of first generation arrivals who were buried without the luxury of proper stone.

There is lots to learn in researching land grants.  Take time to enjoy the process and don’t forget to compare your lands to GIS maps and deeds representing the community at large.

3 thoughts on “ZEROS AND THE LINES IN GIS”