At this fall’s Burris Family reunion held at Pleasant Grove Baptist in the little town of Red Cross, a request for volunteers was made in order to clean-up the Commie Willis Cemetery. The location is east of Stony Run Creek where our earliest known ancestors Solomon and Judith Taylor Burris were once buried. In 1939 over 1000 descendants and friends came together for the celebratory relocation of Solomon’s and Judith’s graves to nearby Pleasant Grove Baptist Church. The move was made out of concern for security and the perptual upkeep of the old cemetery which was no longer owned by family.

The Commie Willis cemetery was left a few graves shy of its original size, but yet it is still hallowed ground. The cemetery remains the final home of other deceased members of our Burris family whose resting place is in need of attention.

Prior to the clean-up, I looked briefly at land records hoping to see more in print about the location we were about to work. I’m certain that the cemetery is located on the following but if not, it’s very very close. From deed book 3, page 20 in Stanly County, in 1850, William H. Randle deeded 226 acres to Kamy R. Willis. The land adjoined Stoney Run to the east, Deberry lands to the north, and Solomon Burris lands to the southeast. The deed included the following clause: “with exception of 26 acres which is reserved for the use of the widow Burris including the house and improvement which she lives during her lifetime.” Wow! Though this may not be Solomon’s original homeplace, I believe the widow Judith Burris lived nearby to be close to her husband. According to this deed, Judith may have lived out her life on 26 acres very close to the cemetery. At a later date I hope to provide a concise report on the location and originations of the Burris lands with emphasis on locating that spot where Solomon first called home. Fingers crossed!

Clean-up Day. This past Saturday, Jan 12, the clean-up day came and it was time to put in a little work. The day was boo-chilly and cloudy with forecasts of rain and sleet breaking out at any point. I had figured to receive an email cancelling the clean-up, but that never happened. That’s because our family is a hearty bunch and there were obligations to meet.

Gathering at the Eudy home on Ridgecrest road, our group of 15 or so were offered rides on the Eudy gator to reach the cemetery which was located near the bottom of an adjoining field. The support was great.

The cemetery was covered in vines of vinca, small shrubs, and numerous understory trees crooked and weak from lack of summer sun. The first task required pruning shear and a chainsaw to clear the grounds of unwanted shrubbery and trees. While this was going on, others sought out and recorded the old readable graves. Some of the stones had been knocked over presumably by wildlife, requiring a little work to upright. The old time technique of dowsing was even brought to task in seeking to locate stones hidden under years of decaying vines. Of this, it was duly noted that a future effort is needed to thoroughly probe the ground to identify stones lost from view. 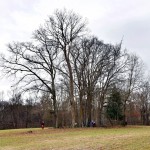 And, here are a few of the stones in the cemetery. The Burris family seems to have used more symbolism on their stones compared to many in the area. To see much larger, click on “Full Screen” at bottom and then click the image again. The image will magnify. And, here’s a website site to help you understand the many images carved on tombstones.

At the end of the day, Paul Morrison, descendant and manager of the Stanly County Heritage Room, walked with Mark Eudy to a nearby spring (picture below). Lined with slate, I can imagine the old spring, and grandma Judith making her way there to fetch butter cooled by the free flowing waters. But the spring may not have been used as such back then. It may have been different. From a follow-up phone call to land owner Richard Williams, he remembered in the 60’s working with his father Cletus to line the spring head with slate. 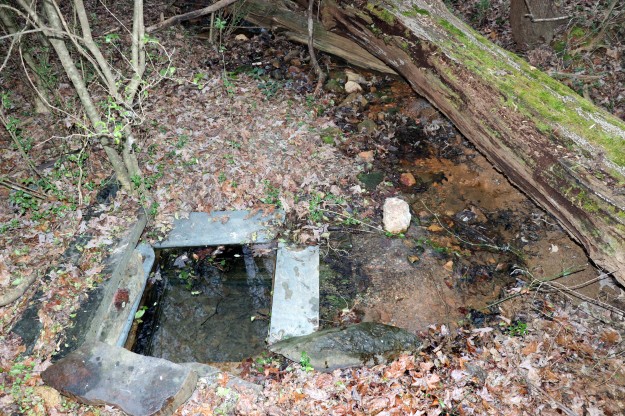 Below are additional photos taken by Paul Morrison after everyone left. There are now corner posts to mark the cemetery and the grounds are cleaned, awaiting your pilgrimage to this, our family’s beginning. And to land owner Richard Williams and neighbor Mark Eudy and his father, we thank you sincerely as your caring attention to this little plot of land is near and dear to the heart of our Burris family heritage.