Why do I like family history so much? Well, to start off it’s all about the satisfaction in knowing you’re finding something which changes our understanding of who we are. But, the initial exhilaration from such discoveries fades as the how and why of learning becomes lost in the repetitive retelling of the story. It’s at this point where fate inevitably comes to the rescue. Seemingly out of nowhere we stumble across a new find reigniting the hunt, the dig for more treasure, and the hope that there’s yet another morsel yet to be found.

It’s in this spirit that I come to you today about the Green family who settled in Anson and Stanly Counties, North Carolina. We know of Richard Green who came from Wake. He lived on Running Creek and is mentioned in the minutes of Meadow Creek Baptist Church. And, there’s a William Green who we believe relates to Richard. There are also a few unknowns such as James and Joseph whose lives I’ve not figure out. And, being the topic of this story, there’s Jacob and Gideon Green whose histories reach back no further back than their 1778 appearance in the annals of Anson County. We know that Gideon owned land on Richardson Creek which he later sold to my ancestor Benjamin Thomas. And from that point we know Gideon was briefly in the area of Reason’s Branch of Rocky River where he owed a mill prior to his death.

Looking to add to the story, I realized that Gideon had a son Leonard and that the name Leonard was used several times in later generations. This honoring of family by name didn’t just happen and understanding the why of it all just may lead us further back.
Seated at the base of this brick wall and waiting for the next morsel to be tossed at me like a bone to a dog, it was after a ten year hiatus when suddenly I realized the importance of another Leonard Green. Dated 22 May 1745 in Edgecombe County, a person named Leonard Green was appointed guardian of Shadrack Pope, an orphan of Jacob Pope deceased. And then on 12 Nov 1756, Leonard Green, now of Johnston County, sold his land in Edgecombe County. This Leonard of Peachtree Creek in Edgecombe County had moved to a portion of southern Johnston County where Wake County would soon be formed. But, there was also the mention of Leonard Green in land records of Northern Wake County in the area known as New Light. Are they the same person?

From the 1771 minutes of Cumberland County Pleas and Quarter Sessions, Leonard Green and Shadrack Pope appear in the following road order:

Whereas a road is laid off from Nuce River to Braswell’s Ferry on the Cape Fear River and the road is opened and cleared to the Johnston line, ordered that there be a road from the said Johnston County line; Wm. Cone appointed overseer. Constable of the uper district to summon all the following to appear before a justice of peace on or before the second Tuesday in July to qualify and make a jury to lay off said road: Wm. Cone, Samuel Green, Leonard Green, Robert Pettigro, Charles Broom, Wm. Corbett, Denis Collins, Absolem Tyler, Abden Tyler, Moses Tyer, James Holland, and Shadrack Pope.

Surely on lands leading to present day Avent Ferry in southern Wake County, the above record links Leonard Green from early Edgecombe to Wake County. And really fascinating to me, less than a two years after the road order was made, the area in question became part of the newly formed Wake County. It’s there and at that time where lived a Joseph Thomas whose descendant’s DNA matches mine. And like Leonard Green, Joseph too had come from the northeast and also was ordered to work the very same roads in now Wake County.

Living in the area of Silas and William Green in southern Wake County, other records of that time identifies a person named “Leonard Green Junior.” Is it possible that Leonard Green who was guardian of Shadrack Pope in early Edgecombe County lived at least for a while in northern Wake County? Many people place Silas and others as being sons or relation to John, Thomas, or Peter Green who lived in northern Wake. I really don’t know as it gets too confusing for me! But, is it possible that Silas or at least some in the area are related to Leonard Green Senior? Not know the father of Gideon Green in Anson, is it possible that he is related to Leonard?

After making the above finds, things again went silent for years. And then while working land grants in Mecklenburg, in the portion that became Cabarrus, I discovered a Leonard Green there, too. Situated near an early Baptist Church known as Haynes Meeting House, Leonard Green purchased 68 acres, being the location where Hwy 24/27 crosses Rocky River today: 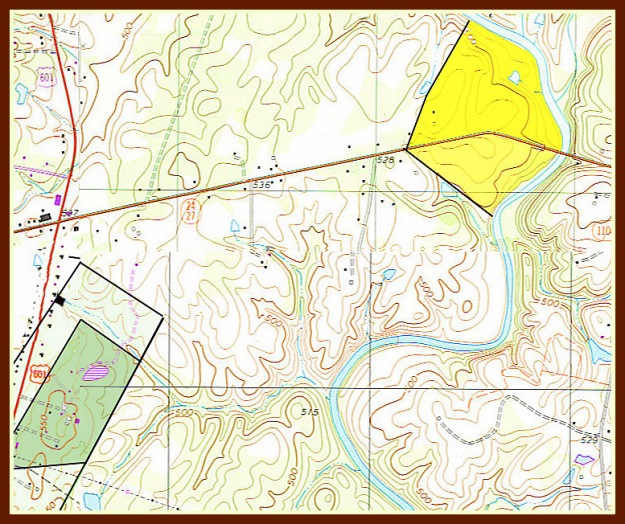 In Yellow  is Leonard Green’s land and in the Green shaded area is Haynes Chapel. The creek leading from Haynes Church to the River was known as Meeting House Branch.

Notice the name Burdig Howell in the above chain of conveyances. He’s likely related to Joseph and other Howells who had also relocated from Peachtree Creek in Edgecombe County. There’s also Samuel Bonds to whom Leonard and wife Ann sold their land. Samuel Bonds was a prominent Baptist minister who may have later formed an early church on Richardson Creek in Anson County before removing to preach in the area of Dutch Neck Creek SC. There’s also William Haynes who witnessed the sale of Leonard Green’s land. The likely namesake of Haynes Chapel, William Haynes moved to the area of Lake Lure in North Carolina where he founded Bill’s Creek Baptist Church. And, also living nearby to Haynes Chapel and therefore near Leonard Green’s land were other people like William Barker, John Bugg, John Powell, and Hezekiah Bryant who all had removed from southern Wake County. There was also George Straight who purchased land in the area before returning back to Wake County. And, as matter of fact, the aforementioned Hezekiah Bryant served out of Wake County in the American Revolution in the stead of Asa Thomas who lived near Joseph Thomas and who later moved to Anson County before his death in Rowan. This Asa Thomas lived and worked in southern Wake County where he too is named on Road orders along with Joseph Thomas in the same location where Leonard Green had once worked.

So, there you go and what do you think? Birds of a feather? There really weren’t that many people in the state back then and their paths seemed to cross again and again as they spread south over the state. That fact really plays heck on autosomal DNA testing making Y testing the best choice.

Tick-tock, tick-tock …once again my understanding of Leonard Green came to a pause in this mangled mess of family history. There was nothing new happening. So for me, it was time to retake my usual place at the base of the courthouse wall …and to wait …and to wait.

Recently, discussion on Facebook turned to Philadelphia Baptist Church and of the lands surrounding it in present day Stanly County. The church is not greatly old but has good history and a caring congregation. On lands first settled by William Brooks and folks like the Morgan and Drye families, the area has been well researched. However, in connection with other mapping projects, conversations with folks in Stanly County led me to begin copying land grants and early deeds from the area. I had the chance to meet with Mr Robert Little who toured me through the neighborhood. It’s a great help to actually see and walk those places I mostly know through documentation alone.

During this side trip into history, Leonard Green chose to make himself known once more. There are no deeds or grants for Leonard in early Montgomery County, North Carolina. There are also no court records or previously known records of any kind naming Leonard as living really early in Montgomery County.  We were truly at our wit’s end.

Dated 5 June 1782, Going Morgan had surveyed 50 acres on Island Creek. Listed in the land grant documentation, chain bearers for the survey are Lennard [Leonard] Green and James McDaniel. I have found no information on James McDaniel, however, at least one online history shows that a William Thomas Daniel of Montgomery County married a person by name of Sarah Self. She is identified in the brief report as being the daughter of Francis or Job Self. Daniel or McDaniel? Note that chain bearers are usually family or neighbors who helped with and witnessed land grant surveys.

So, less than three years after Leonard Green and wife Ann sold their land on the west side of Rocky River in now Cabarrus, here is a person with same name helping with a survey in Montgomery, now Stanly County. I had assumed Leonard Green had died or moved on. But, either he had not moved or this was a son or possibly other family with same name. And, note that the survey is not that far away from Leonard Green’s 1772 deed and is in a location where settled others along the family migration stream? And, note in the above chain of conveyances, living near Leonard Green along the river in now Cabarrus was Jacob Self who came from the area of early Orange/Chatham County NC.

Another mention of Leonard Green On the same day as Going Morgan’s survey (5 June 1782), a person named Job Pendergrass also had his Island Creek grant surveyed. This may be the same person who, from Orange/Chatham County, had served in the American Revolutionary War before removing to present day Old Fort in western North Carolina. And like with Going Morgan, the chain bearers in Job Pendergrass’ grant were James McDaniel and Leonard Green. In that survey as with a few of his neighbors are mentioned previous improvements made by a person named Job Self. Is Job related to Sarah who may have married William Thomas Daniel? Is he related to Jacob Self who earlier lived near Leonard Green on the western side of Rocky River? We know that Job Self was from earlier in Chatham/Orange County located next to and not far from the lands of Leonard Green in Wake.

In closing, I want you to know that the two mentions of Leonard Green in early land grants of Montgomery County is such a simple find. There is so much out there on land grants and very few family historians fully utilize the “Chain Bearer” in making their case. From this post, we know of this other mentioning in a time and place where both the lives of Leonard Green on the west side of Rocky River could have crossed paths with Gideon Green to the south. This new listing for Leonard Green locates him somewhat between the two in a location that ties well to the greater story of migration. This new Leonard could be the same person as the older one who came out of early Edgecombe. He could also be a son. Because their ages don’t work, this new Leonard can’t however, be the son Gideon who later lived just upstream on Rocky River. Why did Gideon name a son Leonard?

is this the last thing we’ll find on Leonard Green?  Will the marble roll and drop again?