In my last post, conveyances by Joseph Thomas in Wake County indicated that ca. 1798 his family was in process of moving the short distance across the Cape Fear into Chatham County. And now, we’re about to go there, to plow new lands thick with our Thomas heritage. In what’s now Lee County NC, the largest family file at the county library is that of the Thomas family.   The family is huge and still going strong today. But before moving forward, let’s take a quick look at Joseph Thomas Senior and what most researchers believe to be his immediate family. Also so as not to confuse, the Joseph I refer is identified in records as literate (able to sign his own documents) and goes by title senior in order to distinguish himself from a son of same name. Note that it’s strongly believed that Joseph Senior is himself the son of a man named Joseph Thomas.

In no particular order, the children of Joseph Thomas Senior are believed to be:

We’ve already been introduced to Joseph Senior, John, Micajah, and Joseph Junior in the records of Wake County. And now in Chatham and Moore counties, we’re about to learn of Frederick, Martin, Benjamin, and Allen Thomas. And later, we’ll learn of Catherine and William. Of all these kids, little info has been provided for three (in red asterisks). What happened to them and what’s their story? The storyline is about to get much more interesting; but for now, let’s look at the family’s initial land acquisitions as they move beyond Wake County: 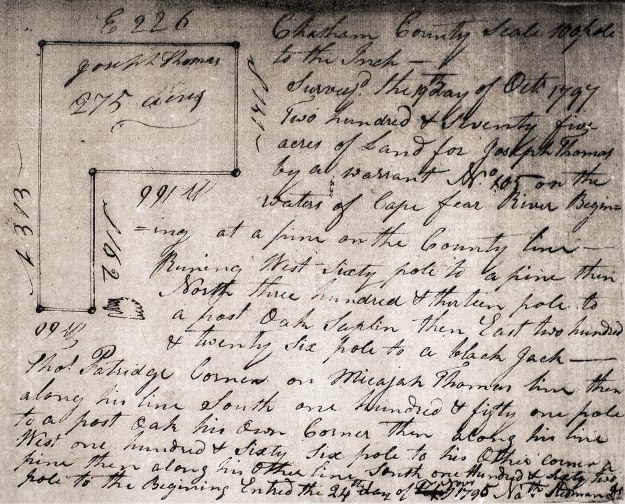 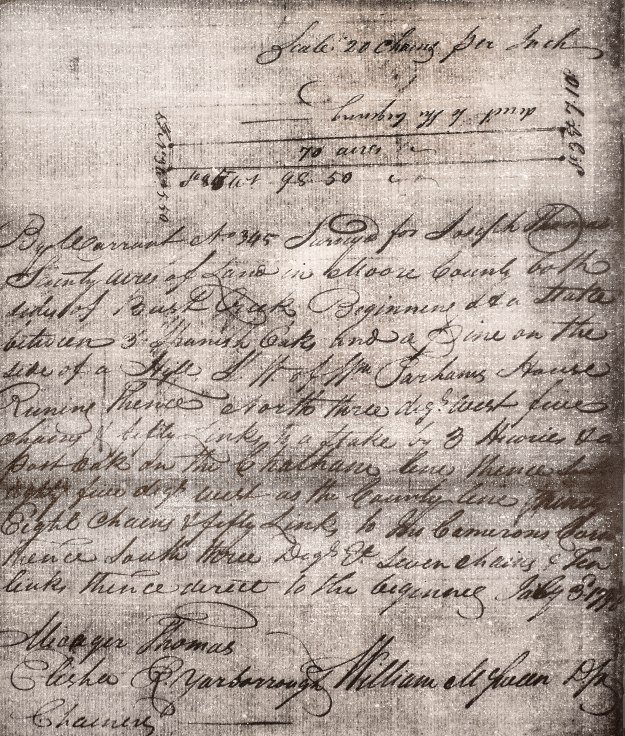 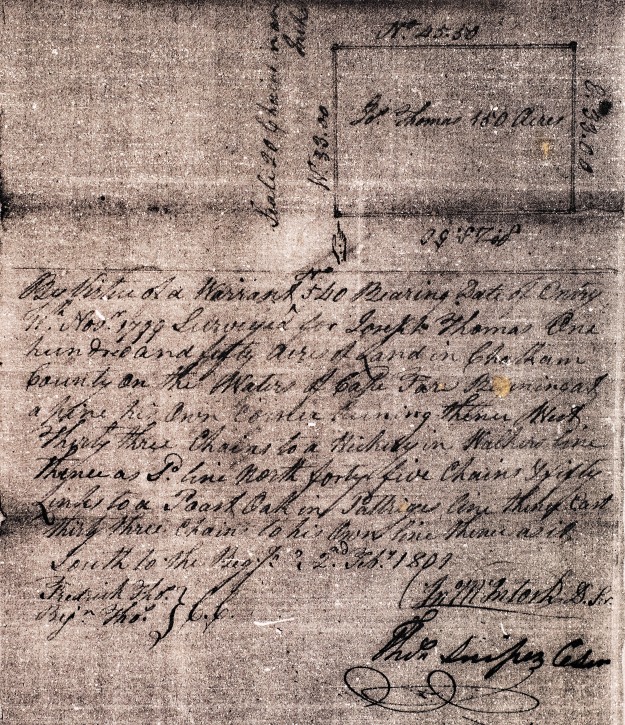 I love to draw on paper the physical shapes of old land grants and conveyances. Using a scale of 1 pole (16 ½’) equals a millimeter, I draw my ancestral lands and even the lands of their neighbors as far out as I can stand. Once in hand, the paper “plats” are like pieces in a child’s puzzle and can be joined together in map form. But, it’s not so easy. These puzzles offer the clever beauty of a chameleon lizard as the look of each piece (and entire puzzle) changes appearance over time. Each new conveyance offers the opportunity for mutation by way of the ever-changing interpretation of preceding records. At first a plat map made of original grants is pretty simple. Most of the pieces fit together nicely and the resulting display is somewhat predictable. But sometimes there are lost records or mistakes and grants that are issued wrongly or something legally happens requiring the land to be reissued in a new form. Sometimes reissued or later conveyances of grants are similar in appearance but are not exactly the same as the original. Also, conveyance by way of deeds and estate distributions infuses an enormous opportunity for change. People acquire multiple tracts of land only to someday die and have it all uniquely divided by committee to satisfy the numbers and demands of their heirs …a totally different shape matrix is introduced!

So, with the help of my little deck of playing cards, let me show you the lands along the Moore /Chatham County line. The videos below are about our Thomas family and also about the community where they lived. I want you to see it all the way I do, to understand how the changing landscape evolved with our history. I want you to understand how I come to my conclusions. So please, it’s important that you start with video one and work your way through them all. Please hit reply at the bottom of this post and let me know if you have any questions, concerns or additions. This is an initial reading of the puzzle and I’m sure there are mistakes. More can be gleaned through the collective eyes of others. Also, note that hopefully by later this year, and presented online, I’ll have all the lands within this area platted out to include original legal descriptions along with their later conveyances.

2 thoughts on “THOMAS LANDS ON THE MOORE/CHATHAM LINE (PT. 2)”