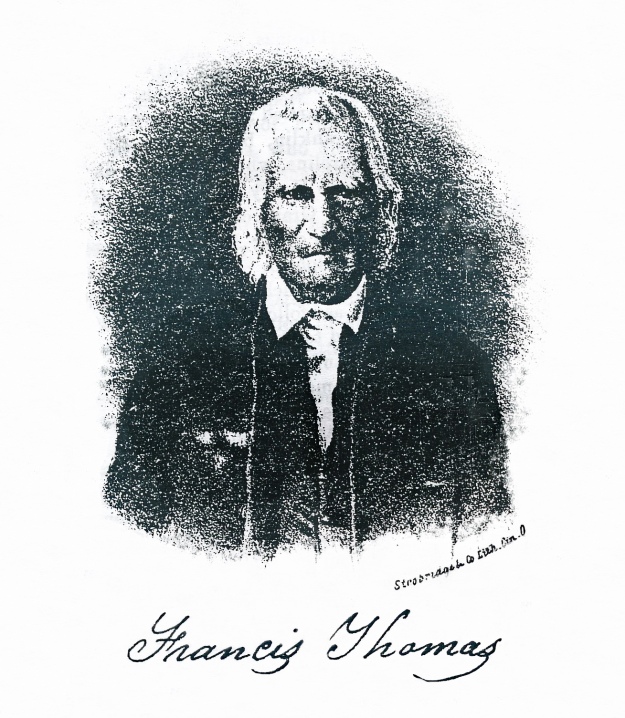 History of Wayne County Indiana -1872       …a son of John Thomas, from South Carolina to New Garden in 1811. He not only encountered the unavoidable hardships of pioneer life in general, and among others, that of going on horseback thirty miles to get bread-stuff, but was obliged, with others, to flee for safety during the Indian troubles. Notwithstanding his fear of attacks from Indians, he held his peace principles too dear not to be preserved at any hazard, even of life. He took his lock from his gun, and hid the gun at a distance from his house, lest, in case of an attack, he might be tempted to harm the Indians.   …He was liberal and charitable; and was during his life a member of the society of Friends.

Francis returned with his parents to Piney Grove Meeting along the NC/SC border following time spent in Guilford County during the Revolutionary War. Francis requested transfer to the Great Contentnea Monthly Meeting in Wayne County North Carolina where in 1807 he married Lydia Woodard and took up a life as farmer. Eventually being honored as the father of the Indiana Yearly Conference, the following was said many years later in memoriam: [while in Wayne County NC] “Francis was visited by an aged Quaker minister named Abel Thomas. After staying the night, the minister got up early and took a walk over the farm. When he returned, he told his host that he had an impression from the Lord, that it would be right for him to sell the farm and move to the territory of Indiana.”

By way of recent contact after seeing this post, a friend of this family has passed on to me a copy of the original land grant Francis Thomas received in 1835. I can imagine the document in his hands and of its journey ending up on this page.  Thank you to those who appreciate and share our history. 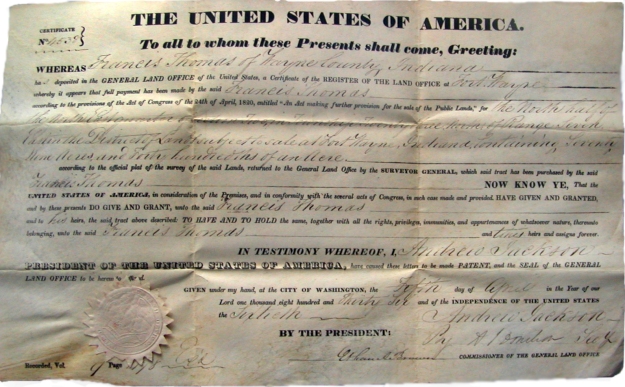 Beginning in the summer of 1811, Francis, his parents, and family moved to Richmond Indiana where they were received into membership at Whitewater Monthly Meeting. Also, removing to the same area was Thomas Willcutts and the family Francis’ late uncle James. Shortly upon getting settled, Stephen’s father John died and is buried at nearby New Garden Meeting where most of the family attended. Note that Wayne County Indiana got its name from the Quakers in Wayne County, North Carolina. And, New Garden Meeting (located in Newport, now Fountain City about 10 miles north of Richmond) was named for New Garden meeting in Guilford County North Carolina. 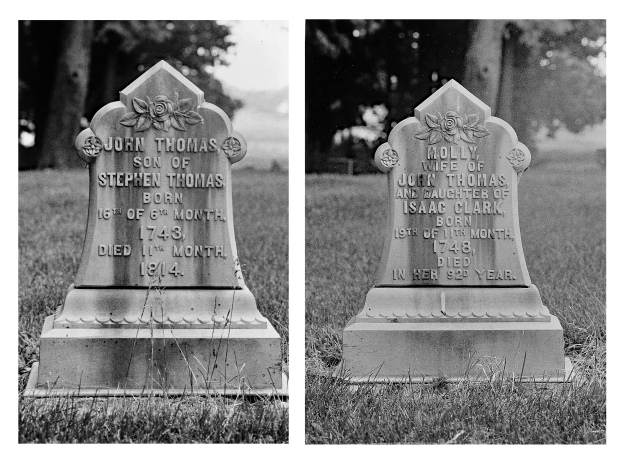 I remember calling and arranging to meet the Quaker minister at New Garden Meeting. I drove up from North Carolina in torrential rains that began to subside as I reached my destination. The minister did not make it as he was only helping in interim as the congregation was in decline and the church was without a regular minister. I instead was gladly met by the piano player who had served the church for many years. She gave me a program, told of old traditions including how in the olden days, men and women sat on opposite sides of the little church and the minister did not offer sermons as such. Instead, each and all were called to speak as so moved by God.

Seeking more, I was led to a tiny corner room that served as library. Musty and damp, opening the door we were greeted with water running down the walls and over the few shelves filled with books. As it’s likely they would not survive much longer, my guide told me to please take any books I believed may pertain to my family. It was her concern, and mine, to get the books to a safe home where they would be loved and cared for. Thinking I had found the holy grail of all Thomas history, I later realized that the one catching my attention was actually an ancient leather bound book titled “ A Journal of the Life and Times of Thomas Story.” I also was given Clarkson and Sarah Jane Thomas’ Union Bible. My immediate family knows why I would choose this book. That’s all! After learning that I am not blood kin to this family, I’ve tried repeatedly to get the books back to the rightful families.

Jornal of the Life of Thomas Story

Inside title page., note the date.

Script at the top says New Garden 2. Was this the second book in the library or was this from the second New Garden Meeting located in I believe Pennsylvania. Also note it was bought in 1737 by William Fairbanke

A sketch on the back inside cover. Imediate family will realize why I chose this book.

I spent the next week in the area scouring through books at Earlham School of Religion (a Quaker College) and taking in the sites. I toured the home of Levi Coffin, father of the Underground Railroad. It was there I overheard who I believe to be some of his descendants in deep discussion about a possible movie. Apparently, Levi and wife separated and ultimately divorced due to his work and being away from home. The church ordered a period of separation during which time Levi’s wife became pregnant. At a time when National Geographic’s had just completed an amazing article on Levi Coffin, a believed descendant of this child was apparently preparing to make a movie from the child’s viewpoint.

I’d like to tell more about my trip and of the story of this Thomas family. It’s an amazing place, a vacation for the soul, and trip I’ll always hold dear. After leaving Fountain City I traveled across Indiana to the town of Paoli where John’s brother Lewis settled and died. That story will be next, but for now, I’d like to end with a slideshow of images followed by a few excerpts from a memorial: “Incidents in the Life of JOHN THOMAS in connection with the Underground Railroad, as remembered by his sons.” 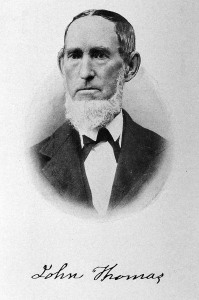 From the Memorial of John Thomas published in 1913

“When the escaping slaves came to the Thomas farm they would be hidden in the field during the day and their meals furnished them. They traveled mostly in the fall when the weather was warm and sometimes they would live on roasting ears which they cook themselves …father had a rigid rule that no fleeing negro would be permitted to tell his name, or whence he came, or how his master had treated him before his escape. The purpose of this rule was that his own conscience might be clear so that should a slave owner arrive and inquire about the escaped slave, he could truthfully say he did not know ….Luke remembers one morning when he was a boy, he got up in the morning as usual and when he came down stairs to put his boots he discovered that the whole room was full of negroes, the escaping crowd being made up of men, women, and children. It was on a New Year’s morning when the party had arrived in the night from another station.”

11 thoughts on “THAT OTHER THOMAS FAMILY: Part 5”