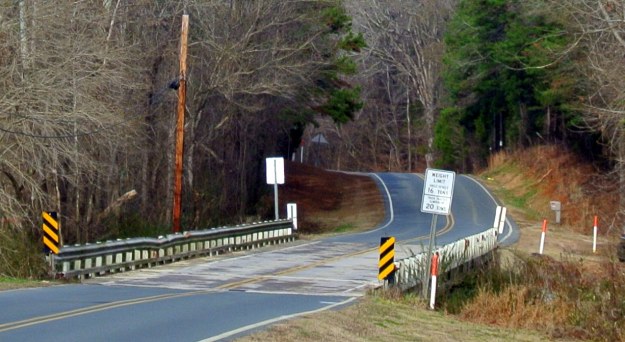 – Mt. Pleasant road bridge over Rocky River. Prior to the bridge, Hagler’s Ford crossed the river at the same location.

I remember years ago being excited in finding an 1810’s attendance record for Methodist churches in the area of Rocky River.  The piece of paper is lost and its details have gone the way of bad memory.  But I’ll never forget that one of the churches listed was called “Love’s.” Likely being Mt. Moriah on James Love’s land, Moriah church was laid down in the 1860’s following destruction by lightning.  Another church on the list was identified as “Tucker’s.” No map nor other record was to be found locating the church.  The proverbial glove dropped and the hunt was on, I wanted to find this church!

The initial google search netted “Tucker cemetery” located on the southwest side of Rocky and west of Edgefield Road.  I found the cemetery and noted those whose graves survive.  It’s clear why it had become known as Tucker cemetery, but where is the church and what record could be found to support it being there?

Finding another clue in a query board post, I emailed the contact and arranged to meet him on Smith Road on the east side of Rocky River. Following a scenic hike through the woods, we reached a really old cemetery not far from the river bank. I knew George Tucker, the daddy of all Tuckers, lived on the east side of Rocky River just upstream from James Love.  Owning land on both sides of the river, this cemetery was located in the northern extent of ol’ George Tucker’s home tract. Though this could be the location of Tucker church, there’s no real proof that it’s so.  More on this interesting cemetery in a later post as for now my contact was pointing me to yet another possibility.

Located on the east side of Mt. Pleasant Road, and just north of the river crossing, there exists an old cemetery.  I was warned to be careful going to it as the land backed up to the hunting club accessed on Smith Road. The land owner had discovered the cemetery while posting the property for no trespassing. Several rows of graves had been identified and it was concluded that even more rows may have been destroyed years ago when the road had been cut deeper and widened. 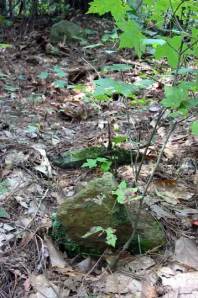 – One of the graves located near Rocky River along Mt. Pleasant Road.

I phoned the land owner and the next morning headed to Mt Pleasant road to walk the land myself.  Starting at the north end of the bridge where the road crosses the river, I hiked through briers up the hill along the top edge of the red clay road bank. Less than a hundred feet away I came upon the grave sites. For sake of location, the photo below was taken with the camera duly resting upon the northwest corner of the bridge. Looking north on Mount Pleasant Road, I have placed a yellow arrow pointing in the woods pointing towards the grave site. Note the mail boxes. 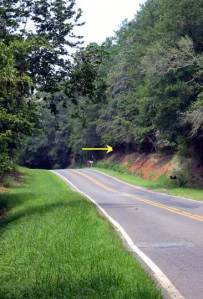 Just as you step into the woods, it is easy to recognize the signatures of an old graveyard. There are slightly sunken areas about five feet apart. The first row runs slightly diagonal to the road. The last grave is very close to the road cut indicating road work may have once cut this cemetery in two. Not all the graves are marked with stones, but most are. They are all smaller stones of a tradition common to older back wood graveyards. The graves are marked with stones at both the foot and head. No identification or writing exists on the stones.

On most any weekend for years, you could find the back tables at the old NC State Archives filled in fellowship shared amongst a group of similarly minded researchers.  One of those is a good friend named John Blair Hagler also of Raleigh who plowed similar records in both family and location.  I remember telling John about the cemetery and he was ecstatic. He knew about the cemetery through family stories but had never seen it and had honestly forgotten about it. The following is what John told me about the cemetery:

My grandmother Hagler was a daughter of Mary Laura Shelton who was a widow living in Concord who in 1909 married the widower Adam M. Furr and they lived on his farm that joined St. Martins Lutheran Church on land that originally belonged to John the cripple Hagler on Rocky River.

Mary Laura had a daughter who worked in a cotton mill and boarded in Concord and she had two daughters and a son. The daughters were Ginger and Raynell and the son`s name was Hugh. And these children were more or less raised by Mary Laura and Adam Furr down on Rocky River.

Thomas J. Shinn, Jr. was a farmer who lived on the south side of the river and he had electricty. He`d invite the neighbors to his house on Saturday evenings to listen to the radio. Hugh and his sisters always went. But Hugh always walked on the far west side of the road because he was afraid to walk on the east side with his sisters because it was nearer a cemetery he knew about and Hugh was always afraid of anything that had to do with death.

In addition to this account, descendants of Thomas Shinn passed down that the cemetery had been a burial grounds for slaves. Though slaves may have been buried in the cemetery, I strongly believe its origins tell another story.  Let’s dig deeper…

So, here’s the big picture.   There was a fellow named John Hagler II who was also known in records as John the Cripple. Born ca. 1740, he married Catherine Seitz and died prior to the July 1811 probation of his last will and testament. And as witnessed by a surviving estate record and division plat, John’s wife lived until ca. 1826. Much of their estate fell into the hands of son Charles Hagler who lost all due to indebtedness. Charles’s son Nelson paid the debt and regained ownership after returning ca. 1850’s from the gold fields in California.

Looking even further back, in the summer of 1779, Henry Sides entered land for a Secretary of State land grant, being 100 acres “joining John Hagler land.” John Hagler is not recorded as a landowner until being granted 100 acres in 1784 identified as “the place where he lived including all his improvements.” This “home tract” straddles present day Mt. Pleasant Road and adjoins the lands of Henry Sides on the north bank of the Rocky River.  Knowing John Hagler was married to Catherine Seitz, how was she related to her next door neighbor Henry Sides?  [for answer, see comment by Anna Hagler Melvin]

Cripple John Hagler would go on to acquire much more land.  In 1798 he purchased the home tract of Henry Sides, indicating Henry had moved away.  John Hagler’s lands eventually took in tracts 10, 11, 15, 16, 17, 18 and 19 as seen on my plat map of the area: http://www.angelfire.com/nc/benjthomasofansonnc/northeastmap.html . To see the land descriptions and explore deeper into Cripple John’s connection with his neighbors, I strongly encourage you to print and spend a little time relating the plat map to its related legal descriptions: http://www.angelfire.com/nc/benjthomasofansonnc/northeastword.html

While looking at the map, also notice entry #9 that was granted December 1820 “for the use of the meeting house joining the heirs of John Hagler, dec’d. Had church meetings met in the area prior to a church being built per this grant? Note that this land is now the home of St. Martin’s Lutheran Church.

As already discussed, a major road for the day ran directly through Cripple John’s land, crossing the river near the present day path of Mt. Pleasant Road. Predating the bridge, early maps from the late 1700’s through the mid1800’s identify the crossing as “Hagler’s Ford.”

Raised Lutheran, the Hagler family is mentioned numerous times in various church records. During the 1790’s, Rev. A. N. Marcard recorded several baptisms and a burial at the “Rake River Cressen.”  Found in the records of St. John’s Lutheran Church, Rev. Marcard frequently provided such service to smaller churches that, for whatever reason, were without ministers. And in the early 1800’s, Rev. David Henkel, a traveling Lutheran minister, made his way through now Stanly and Cabarrus Counties.  Though I’ve lost my copy of the record, Rev. Henkel’s diary provides valuable insight to the family of John the Cripple.  He tells of both preaching and baptisms at the home of “Widow Hagler” along Rocky River. [please read post comments by Anna Hagler Melvin.   She has provided pertinent background and records from her copy of the Henkel diary.]

So, before land was formally granted for the construction of the nearby meeting house known as St. Martin’s, worship meetings were taking place in the home of John the Cripple.   And also before the construction of the meeting house, John Hagler II was likely buried on his home tract.  Located near the wagon road overlooking the “Rake River,” he was buried on a pleasing spot reachable to his widow who spent the remaining years of her life on the land. The crude grave markers we see today tell the story of age and of a time where proper stones were few and far between. The graves also tell us of the slaves and families who later worked the land.

Meetings at the home of “widow Hagler” not only continued to serve her personal walk, they also helped to light a fire in the surrounding community.  As she faltered, the timing of records indicate the community took the appropriate actions and built a church from beginnings she may have helped start. There was no further need for proper burials at the Hagler place along the river as St. Martin’s Lutheran church had become the new home of faith …and burials.

In the end, I think what was first the Hagler family cemetery later became a burial ground for slaves before becoming an abandoned cemetery that scared little boys who passed by.

And as for Tucker’s Church, its location is still uncertain.

16 thoughts on “A Journey to Hagler’s Ford”