With the exception of an occasional passing jogger, I was alone there in the misty Pennsylvania pre-dawn morning. Monuments to the dead rose above the hallowed fields as far as my eyes could see. And peacefully silent, I sat in tearful solitude near what was once the Union Headquarters. The morning glowed surreal as the changing tints of majestic purple washed over the landscape. Far across the fields laying before me, another monument made itself known. The white spot on the distant tree line acknowledged the State of Virginia, the Army of Northern Virginia and atop the large granite block was Robert E. Lee with his horse “Traveler.” Most if not all of the North Carolina troops serving at Gettysburg did so under the command of the Army of Northern Virginia.

Over 620,000 Americans died in the Civil War nearly equaling the combined number killed in all other armed conflicts. For every three men killed in battle, five died of disease. And at Gettysburg alone, over 51,000 were killed in just three days. Though a tragic waste of humanity, it was a necessary war and there was little option but for the south to lose. I can’t imagine this country if the outcome had turned out differently. And as for the State of North Carolina, we lost more men than any other state in the Confederacy and yet our men served valiantly while having the least to gain.

What was it like? What were the emotions running through the minds of my ancestral neighbors who made their way to Gettysburg for the pivotal battle? Found amongst the private collections at the North Carolina State Archives is the personal diary of Sergeant James E. Green. In the days leading up to Gettysburg, James wrote about the towns and of the people he passed. The unit moved north as the roar of cannons grew louder. And then, without warning, his regiment, CSA Co. I 53rd Reg. NC turned towards Gettysburg where it entered the fight. Take a moment to read the following pages from James Green’s diary: 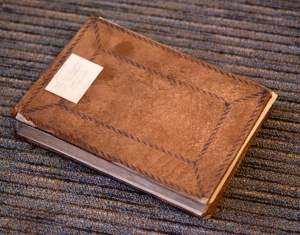 In 1860 my g-grandfather’s older brother Hampton H. Thomas was enumerated as living in Monroe at the home of John Warwick, a shoemaker and emigrant from the state of Pennsylvania. Hampton enlisted 5 June 1861 in Co. B. 26th Reg. NC where he reached the rank of Sergeant.   I imagine the memory of John Warwick weighed on Hampton as he too made his way to Gettysburg.

“No Man Can Take Those Colors and Live”

On 1 Jul 1863, the first day of Gettysburg, the 26th faced off with the 24th Michigan at Herbst’s woods. The 26th’s regimental colors were shot down 14 times with 588 out of the initial 843 troops being killed. The CSA 26th NC and USA 24th MI collectively lost more troops than any other units at Gettysburg …day one was over and it would not be their last. 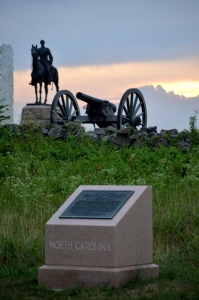 On 3 Jul 1863, the 26th crossed the fields of Gettysburg in the Pettigrew-Trimble-Picket assault against the center of the Federal line on Cemetery Hill. In this epic struggle, the 26th  regiment’s colors would be shot down 8 more times with another 120 troops being killed. Planting its flag on the Federal works known as “The Angle,” the 26th NC may have advanced farther than any other Confederate unit. Or did they? There’s no doubt that the unit tragically lost more men than any other unit at Gettysburg. The monument at the foot of Cemetery Hill erected in 1986 by the State of North Carolina reads:

Although nearly destroyed during its successful attach against Meredith’s Iron Brigade on July 1, the Twenty-Sixth North Carolina Regiment joined in the Pettigrew-Pickett Charge on the afternoon of July 3. Advancing under solid shot hot, spherical case, canister, and musketry, the Regiment charged to within ten paces of the stone wall to their front.

The scene was described by an artilleryman of a Rhode Island battery: “. . .As a regiment of Pettigrew’s Brigade (the Twenty-Sixth North Carolina) was charging . . .and had almost reached the wall in front of us, Sergt. M. C. Onley cried out . . .’Fire that gun! Pull! Pull!’ the No. 4 obeyed orders and the gap made in that North Carolina regiment was simply terrible.” Under this galling fire, the Twenty-Sixth North Carolina was compelled to retire with the Brigade from this point to Seminary Ridge.”

Should we trust what’s written on the above monument provided by the State of North Carolina at one of our nation’s most important historical site? Are we certain the information is correct …is it historically accurate? From the history of Capt. William A. Arnold’s Company A of the 1st Rhode Island Light Artillery, much of the information on the 26th’s marker is founded in the writing of Thomas M. Aldrich. Looking more closely at how the battle unfolded, it appears the 26th NC may not have made it front and center to “the Angle,” but rather faced off with the 12th New Jersey and 1st Delaware a bit further to the north. If the monument is incorrect, why hasn’t the State of North Carolina changed it?

Regardless of how Gettysburg played out, the 26th Reg. NC served the cause valiantly. And as for Hampton H. Thomas, whatever became of him? According to his Combined Confederate Military file, Hampton H. Thomas lost a leg on 3 July 1863 after being captured at the battle of Gettysburg. Following the amputation of his right leg, Hampton was transferred to David’s Island, N.Y., to Fort Wood at Bledsoe’s Island, and then on Christmas eve of 1863, to the Point Lookout Prison in Maryland. Known as “Hell on Earth,” many died from typhoid and other diseases while confined at Point Lookout. Located on a spit of land surrounded by water on three sides, the huge number of prisoners confined in the small space quickly contaminated the limited water supply. 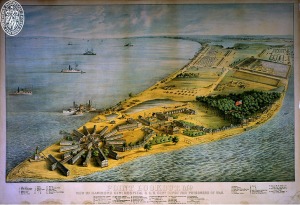 Hampton Thomas was eventually exchanged at City Point, Va where he stayed until 1865. Returning home to North Carolina, Hampton’s death is recorded in his grandfather Joseph Newsome’s bible. Though Joseph died in 1848, Hampton is listed in the bible as follows: 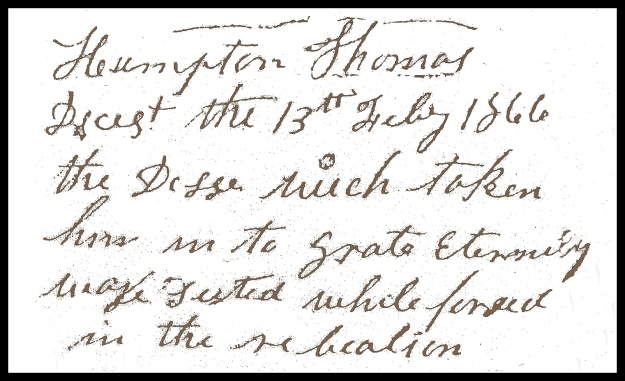 It’s very likely Hampton Thomas died of typhoid or from some other disease he contracted while in service at Gettysburg or imprisoned at Point Lookout. He’s likely named for a probable uncle Hampton Newsome who also served in the Civil War.  Hampton Newsome removed to TN where he lived out the remainder of his life.

1 thought on “A TRIP TO GETTYSBURG”