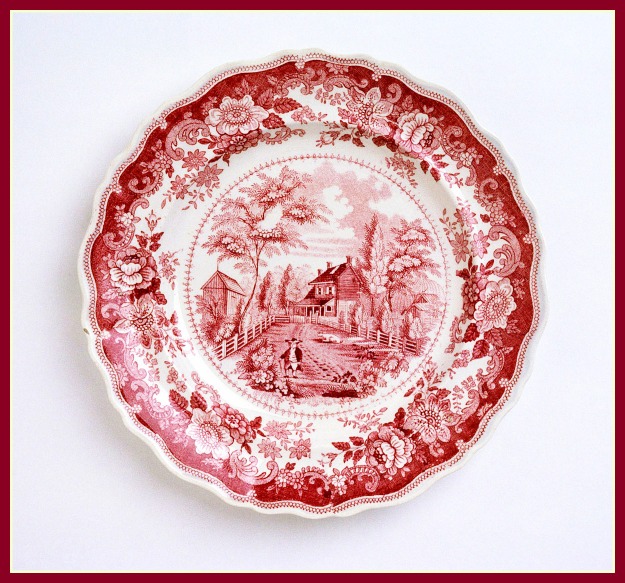 Like a bow wave pushing forward in front of a boat, competing religious denominations moved through 18th century North Carolina staying just ahead of the King’s reach. Baptists, Quakers, Moravians, Lutherans and others, held to their own tenants of faith, but were ultimately governed by laws set forth by the crown. Escaping the tyranny of European kingdoms and principalities, some came to this land as individuals while collective groups came in contract with and even funded by England’s need to populate this new land. Did these newcomers find satisfaction and security in the “church state?” From civic duties to faith, the King had power over all. Ultimately resolved in revolution, was it right for such power to be based solely on one man’s spiritual interpretations? Escaping oppression to this land with promises of so much hope, matters of faith really were complex. Over the next few posts, I’ll take a little time to explore my Quakers roots and share how their story sets the stage both for and in conflict with who I am today.

Quakers believed in the inner light. This was the notion that God was a spiritual presence within each individual and could speak to all humans through the words and actions of anyone.

The Society of Friends known as Quakers spread across the open landscape of North Carolina along two primary paths of migration. Out of New Jersey, Pennsylvania and Maryland, Quakers brought over by William Penn moved with Moravians and others along the old Indian path usurped and is now known as the Great Wagon Road. These Quakers settled in the piedmont, particularly in areas surrounding present day Greensboro. But much earlier out of southeast Virginia, others opened meetings down east in Perquimans County and at places like Rich Square in present day North Hampton County. These Quakers migrated westward up the Neuse River to places like Contentnea Creek Meeting in old Dobbs, now Wayne County. Slavery and events of the mid-1700’s made it impossible for Quakers to morally justify efforts aimed at further growth in North Carolina. Guided by a strong peace ethic, the Quakers removed themselves in mass to places like Ohio and Indiana.

It’s in this environment that I begin to write about the life and family of Joseph Newsome. He was born in Wayne County, the third child of William and Mary  Jordan Newsome. He is my third great grandparent. And as written in the records of Nahunta Monthly Meeting (from the earlier Contentnea Creek Meeting), Joseph Newsome was born 10 Eighth 1777. Note that Quakers did not use the pagan naming for months as we do today: 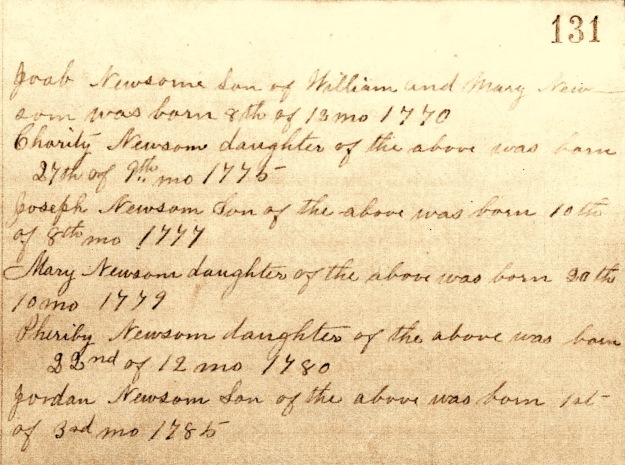 William Newsome was born about 1755 in Surry County VA, the son of Joel and Rebecca Dickenson Newsome. On 1770,1,20 William was received in membership to Rich Square Monthly Meeting in North Hampton County NC. There, he married Mary Jordan, the daughter of Joseph and Patience Ricks Jordan on 1770, 3,17. Joseph descended from Thomas Jordan, patriarch of what’s considered to be the most significant Quaker family in Virginia. And, closer to our immediate family, Mary Jordan’s brother Richard Jordan was a prominent Quaker Minister. He toured and preached throughout England and in his honor, a pattern of Staffordshire china was named for him. Richard lived out his latter life in New Jersey.  The image at the top of this post captures Richard’s home. ….and he is family! 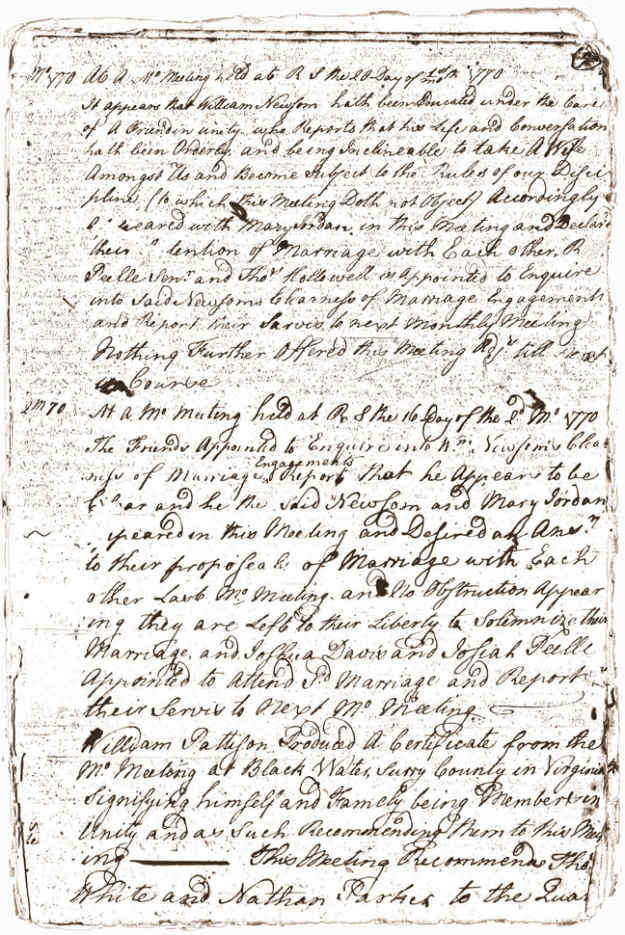 As a child, our Joseph Newsome witnessed the rapid increase in the acceptance of slavery as a profitable practice by farmers used to increase productivity. The trend was met by Quaker sentiment growing in its voice to abolish slavery. And then enacted 13 Jul 1787 by our newly formed United States Congress, the Freedom Ordinance (formally An Ordinance for the Government of the Territory of the United States, North-West of the River Ohio) created the Northwest Territory situated beyond the Ohio River. Item 6, the final item of this important act reads:

Free from slavery, the newly opened land was an answer to Quaker prayers. Beginning in the late 1790’s, a migration to Ohio and Indiana escalated after 1811 when peace with the Indians was realized following the Battle of Tippacanoe. By 1820, most Quakers in North Carolina had either been disowned for holding slaves against church doctrine or had removed from the state in protest of slavery. In witness from a Nov 1911 Quaker church information bulliten in observance of the Quaker migration, the following was said about a person who had relocated to Indiana from the Contentnea Creek Meeting in Wayne County NC:

“. . .was visited by an aged Quaker Minister, who stayed the night. The next morning, the minister got up early, and took a walk over the farm. When he returned, he told his host he had an impression from the lord, that it would be right for him to sell the farm and move to the territory of Indiana.”

And now back to the Newsome family. William Newsome was likely disowned from the Quaker Church prior to 1790 as in that year he is listed in the Wayne County census as owning one slave. Dated 17 April 1795, the marriage bond for our Joseph Newsome and Christian Barnes appears in county records. Christian is the daughter of Simon and Mary Barnes. The 1800 Wayne County census enumerates Joseph and family as owning one slave. And following the mass exodus of Quakers to Indiana, Wayne County was likely not the place it once was.  Land records show that Joseph and family removed to Anson County NC ca. 1817.

Now living beyond his Quaker upbringings, Joseph Newsome lived out the remainder of his life on the banks of Gourdvine Creek in now Union County NC. Did his childhood amongst Quakers have an impact on his life? Built on his surviving bible, future posts will delve deeper into his family and into some of their lives in our changing antebellum south.

1 thought on “MY QUAKER HERITAGE”