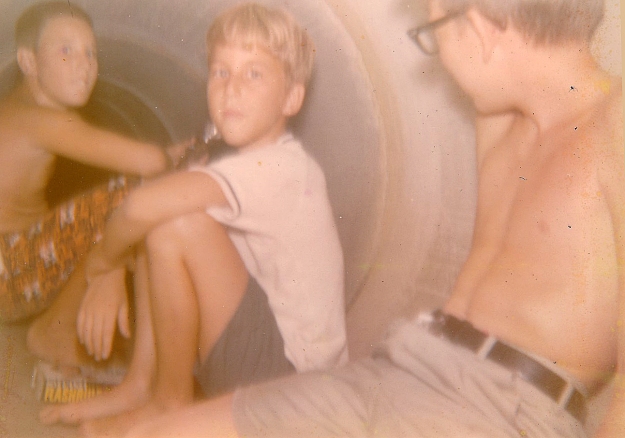 Walking up the street with our dog Mister, I laid down on the pavement to get a peek through the little holes in the man-hole cover. I knew every inch of the storm drains as earlier that summer Jamie, the Allen boys and myself spent weeks crawling in from the creek to explore and map the underground system. What a life and looking back I’m really thankful we survived and were never caught down there at a time of flooding waters for which the tunnels were designed (warning: do not try this).

With burlap sack in hand and dog by my side, pecans were needed and we had a job to do. Making our way to the vacant corner lot on Park Road, the plan was to spend the afternoon gathering nuts from under two very large trees. Thanksgiving was behind us and my mom turned to preparing the family for Christmas. My job was to collect the pecans she used to make the best ice box fruit cake you’d ever want to taste …*really.*

Mister was the dog of all dogs. He was a champion several years in a row at the Freedom Park Pet Show and was eventually awarded a grand champion trophy. The special prize was given with the stipulation my sister would not enter the dog again with the idea being to give others a chance to win. And on at least one Sunday morning at nearby Park Road Baptist, a sermon offered up by the Reverend Milford told of Mister’s frequent “baptisms” in the church fountain. Numerous times I’d see Mister outside my classroom window at Park Road Elementary waiting to lead us home at the end of the school day. What a dog!

My sister and Mister at the pet show

Mrs McDaniel and myself serving cake to Mister at my birthday

My brother and Mister in the backyard 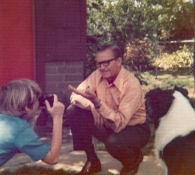 And then there was Ms. McDaniel, Mister’s good friend and our next door neighbor. I remember once her giving me a birthday cake with candles you couldn’t blow out …she made sure a place was set for Mister to join in. An older couple without kids, sometimes Ms. McDaniel and her husband would invite our dog Mister to join them on vacation. One day upon returning from a family outing, we were greeted by a huge poster sized portrait of Mister lighted and hanging in our front yard tree. A gift from Mrs. McDaniel, tor many years the framed poster hung over our console TV which was covered with all  of Mister’s trophies.

Poster of Mister with trophies watching over during an evening of board games.

Back to the corner lot. On this particular fall afternoon everything was going well with our task of gathering nuts. That is, until two fellows on motorcycles turned the corner into our subdivision. It was the late sixties so imagine long hair, suede coats, and lots of fringe. And one of the bikes was the longest chopper you’d ever want to see. It was all happening so fast but I knew this couldn’t end well. You see, the one thing Mister Dog couldn’t resist was the opportunity to chase a motorcycle. Before I could even turn to him, the dog was making way at full spend trying to get to one of the biker’s feet. I’ll never forget seeing that long chopper trying best it could to swerve in hopes of avoiding our dog. It was then, all of a sudden, that there was a crash and the two bikes and their riders piled in a tangled heap. I remember heading to the scene but seeing the expressions on the biker’s faces, knew it’d be best to take my dog’s lead and run as fast as I could towards home.

The corner lot on Park Road went through a major transformation following the Thanksgiving holidays.  Strings of lights were hung, rows of stakes were driven into the ground, and Christmas trees were strapped to them creating a glorious sales display. The smell of balsam and cedar filled the air and lots of activity dominated our sub-division entrance until Christmas Day. After Christmas the display was taken down and all the unsold trees were piled up to be hauled off. It was at this time where some of us kids seized upon the opportunity at hand.

For several years, and usually during the work week following Christmas, we kids descended on the corner for what we knew was the greatest event of the holiday ….the Christmas Tree battlefield. To get the event underway, we’d chose up sides and divided all the left over trees. The trees were woven, stacked and trimmed into makeshift forts. There was the protective intersanction or keep and we even made portals from which warfare would soon visit. And after our forts of green were built, we kids pooled our money together before heading across the street for a buying spree.

Across from our corner lot was Park Road Shopping Center …the best thing going for kids. There was a movie theatre, barber shop, a pet store and even an ice cream shop. Oh, and ask me sometime about the time we kids spent several nights collecting lightning bugs which were released in mass during a Saturday morning summer children’s matinee. I digress but know that the shopping center was a great play ground. For tag or hide-and-go-seek, there’s no better place to hide than behind the coat racks in the ladies section of Ivey’s or Penny’s. And, then we discovered the back side of the shopping center. It was there, while exploring the contents of dumpsters, that we figured out you could reach the top of the building by climbing over one certain receptacle. And what a place up there; we were like kings of the world! Some of the best games of army were played on top of the shopping center and in the cold of winter the frozen lakes of water became the perfect sporting arenas for our band of mischievous kids.

Park Road Shopping Center also housed two grocery stores. Colonial was at the top of the crescent row of stores while A&P was at the lower end. It was there where we kids headed to buy as many cartons of eggs as our collective monies would allow. And so, the forts were readied and we were fully armed …it was now time for the battle to begin.

All wrapped up in protective layers of clothing, we duked it out among our little kingdoms at the corner of Park Road. Sometimes our forts worked as we had hoped but many an egg made it through the defensive fortifications. There’s nothing like the stinging smack of an egg on an icy cold winter day. There were raids and counter maneuvers and at some point the forts were abandoned for an all-out conflagration face to face …ooh!! Our annual game was repeated for several years until one certain battle ended with a chase passing through the ground floor of a newly opened office building. We had imposed badly upon the working class and knew at that point our good times were over. I think growing up is as much about endings as it is about new beginnings.

Anyhow, parcel by piece, the classy old houses and vacant lots along Park Road disappeared. For a while there was the trend of building 3-4 story office buildings. Nowadays construction has begun anew and a mix of housing is being built atop retail space. It’s the flavor of the day.

I loved my childhood in Ashcraft across from Park Road Shopping Center. We had plenty of adventures and we certainly tested the rules of norm. Yes there was neighborhood rivalry and a social pecking order, but nobody was ever hurt. We knew the limits and always watched out for each other. And in all of that, I know the neighborhood will continue to change as it always has and always will. But in all of it, I’m thankful for the memories and for my time growing up on Park Road.

1 thought on “GROWING UP ON PARK ROAD”