Today I happened across a very interesting deed of sale while going through online records for Anson County. In book T and on page 359, Lee Yarborough conveys to George Carker/Kiker 75 acres on the south side of Rocky River located in the river fork and Richardson’s Creek. According to his revolutionary war pension request, George Karcher was “born in the County of Philadelphia and State of Pennsylvania on the 25th day of October 1852” (1752). At one point he lived in a section of Mecklenburg County that later became Cabarrus. I believe a grant for land located north of Rocky River and east of present day Hwy. 601 is where he first settled in our state of North Carolina. You can go to my land records site where this tract and its legal description are identified as map key tract #38. 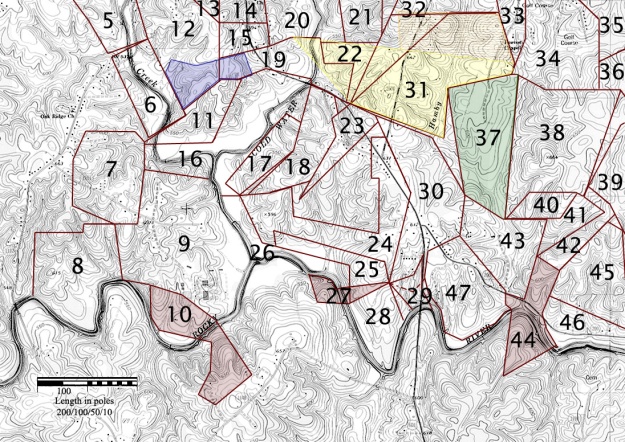 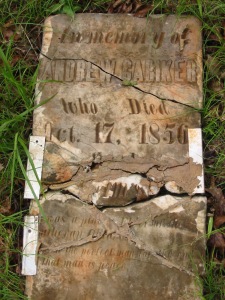 Before moving forward, it’s important to point out that just a bit south and across the river from George Karaker’s granted land is located what’s known as the Tucker Cemetery.  It’s there where Andrew Cariker’s grave is located. Who was Andrew and how is he connected to the earlier George Karaker?  Are they family?

Also found in his revolutionary war pension request, “on August 31, 1835 in Pike County Georgia, the veteran (George Karcher) applied for the transfer of his pension benefit to the Georgia agency giving as his reasons for moving from North Carolina to Georgia. …the veteran’s application for a transfer was supported by the affidavit of John D Lee who states that he has known the veteran from the affiant’s earliest recollection. …and on December 4, 1848 in Heard County Georgia, Daniel Kariker [sic] gave testimony that he was present when George Karcher alias George Kariker was married to Frances lay in Anson County North Carolina about the year 1806 and that Frances Kariker is the widow of George Kariker who died in Heard County in October 1836.” George’s wife’s name is spelled incorrectly; it’s supposed to be Lee. And of further interest, George and Frances’ son Phillip had son Edmond who married Elizabeth Brown Traywick who was first married to Benjamin Thomas Junior.

The above deeded land at the mouth of Richardson Creek is located in an area thick with those of name Lee, Gilbert, Culpepper, and Brooks. We’re not certain of earlier locations in which the Gilbert family lived, though evidence points most strongly toward the northeast to points from Wake County and to its east. We also know the Brooks family passed through Chatham County and also from points further east.

In the above deed dated 1804, note that the land in question included “50 acres left William Gilbert by his grandfather John Brooks.” This is rare, huge, and a wonderful inclusion in such a simple deed of sale. The implication is that William’s mother is a Brooks …and with that, who was William Gilbert’s father?

Dated 1789 and registered in Anson County deed book B2-344, Jesse Gilbert, Esquire sold to Jno. Brooks three tracts on Richardson Creek. Located within the geographical area of these these combined families’ lands, it’s interesting that this deed was witnessed by William Gilbert and Frances Yarborbough. It’s believed that Frances Lee first married into the Yarborough family before marrying George Karcher. And could William Gilbert be the son of Jesse or possibly others carrying the name? Is he the son of John or Thomas Gilbert?

From forums online it’s clear that others have spent many hours pondering this same question. And as for myself, I’m not at all certain as to the father of William Gilbert. I’m equally unsure who all has seen and studied this deed which names William Gilbert’s grandfather. As much as being given a detailed answer, I appreciate leaving any learning opportunity armed anew with questions driving me to some greater awareness yet unknown. Simply call them clues if you like, information like that found in this deed may possibly open new doors. If you’re a researcher of this family I’d like to hear from you. Is this new and does it add to your family possibilities.