It really is a hard task proving one’s ancestry back to Virginia. As many Carolinians say of their family, ours has been here since dirt. In other words, they go back to a time prior to destructive storms and courthouse fires to the days when records have been lost or the government was not in place to effectively record the lives of its citizens. As for our Thomas family, we do have believed branches reaching back to Isle of Wight and Nansemond counties in southeast Virginia. Some even believe we go back to Jamestown though that idea is in no way supportable.

In this post I want to look at the period in time when families rolled out of Virginia to the fertile and less governmentally restrictive lands of Carolina. I’ll start to look at records here in North Carolina and not so much at those in Virginia. I can look at each and every Thomas family making the move, but for now, will offer a broad overview of a few well-researched lines believed to be connected to our narrow migratory path.

The first record for the Thomas family in North Carolina is found in deed 1-57 Chowan, 22 Nov 1704, from John Thomas “of Nancymond” Co. VA to Coll. Thomas Pollock of Chowan. Being 208 1/3 acres on the west side of Chowan river “taken up by John Lawrence decd., the sd. John Thomas having a good right and title of the sd. land by right of Mary, my now wife, daughter of ye aforesaid John Lawrence.”
Of interest, Col. Thomas Pollock was a merchant, the wealthiest man in North Carolina, a Colonial Governor, and the person charged with executing the Tuscarora Indian Wars of 1713-1717. Thomas Pollock lived on Salmon Creek, opposite Eden on the Chowan River. Pollock was unscrupulous in business with it being said he would even jail people for not agreeing to sell them land.
From records in Isle of Wight VA, we know John Thomas married Susannah. She was  both the daughter of John Portis and widow of John Frizell. We know Susannah died early as on 22 Nov 1704, John Thomas, of Nansemond County, Virginia, deeded to Col. Thomas Pollock of Chowan Precinct in North Carolina, the aforementioned 208 1/3 acres on the west side of Chowan River. Being part of 625 acres patented by John Lawrence dec’d, the land was conveyed by John Thomas on September 25, 1663 “by right of Mary my now wife, daughter of ye aforesd. Jon. Lawrence.” From this deed we know that Susannah died and that John Thomas married second the daughter of John Lawrence. And marking the passing of John Thomas, on 16 Oct 1713, Mary Thomas, widow, of the Upper Parish of Nansemond County, sold to John Lawrence, Sr., 100 acres in the Lower Parish Isle of Wight County. This land from a patent of 530 acres to John Lawrence deceased on June 5, 1678, lying “upon maine Blackwater” and bequeathed to her by her said father in his will dated 2 Jan, 1696.

John Thomas and second wife Mary Lawrence are believed to have had a son John Thomas. Representing either John Thomas the elder, or his son John, or even a grandson of same name; a John Thomas appears numerous times as living in the area of Wiccacon Creek in northern Bertie, now Northampton County NC. In the map above, (the yellow arrows) reflect this migration from Pagan Creek, to Blackwater River, and then down the river to the areas of Wiccacon west of the Chowan.

Relating to a John Thomas, son of John Thomas and second wife Mary Lawrence “of the Upper Parish of Nansemond County”, John Thomas held onto holdings in Virginia until on 20 Sep 1736. Following the directive of his grandfather John Lawrence as outlined in his last will and testament, John Thomas deeded 100 acres east of Blakwater to John Lawrence, Jr. of the Lower Parish of Isle of Wight County. Knowing John Thomas the elder had died, this must be his son. The land was “bequeathed to daughter Mary Thomas by John Lawrence, Sr.” It is believed that John Thomas (the younger) moved to now Edgecombe County where his life as founder of Toisnot Church is well documented in Baptist histories (red star on map above).

The yellow “A” below provides a closer look at the area of settlement along the Wiccacon Creek. Also in that area at about the same time, there are records for William Thomas, Phillip Thomas, Lazarus Thomas and even a Joseph Thomas who all were all somehow related as close as children or grandchildren of John Thomas and his first wife Susannah Portis. Some of their descendants also moved to Edgecombe (red star above). There’s also a John Giles Thomas in early Wake County, (green star above) who some believe is also from these families.

Joseph Thomas, son of John Thomas and Susannah Portis took a different route to North Carolina. As discussed in earlier posts, Joseph first appears at Oropeak Swamp on the state line. Marked above by (a green arrow), Joseph moved to the Cashie River which runs south and eastward of the Wiccacon. It empties into the Roanoke near it’s confluence with the Chowan. Some land and court records locate this Joseph Thomas as living more northerly along the Kashie Swamp and therefore closer to other Thomas family (green B below). Some records locate the family more southerly, being closer to the Tuscarora Indian Villages (green C below). So, exactly where did Joseph settle in Bertie? That’s an important question as understanding its answer will impact believed interactions with nearby Indians during a seriously volatile time.  Also, was John Thomas’ original 1704 land on the western side of Chowan River located closer to family in northern Bertie or was it situated further south nearer to Joseph’s land? This was all very early and to put it into context, 1704 was just a few years following John Lawson’s  1701 expedition into the Carolina backwoods. It also predated the Tuscarora Wars by almost ten years! What would life have been like back then!!!???

Joseph Thomas, son of John Thomas and Susannah Portis, died and left a last will and testament in the 1730’s. His son Joseph lived in southern Bertie and died ca. 1758 per the probation of his last will and testament. In the instrument, Joseph Thomas (the younger) names yet another in the family called Joseph Thomas who is believed to have sold land in the late 1760’s before moving to now Wake County NC (green star above). I’ve found absolutely no record sealing the deal, but timing and some of the surrounding names in Wake County loosely link Joseph back to Bertie. 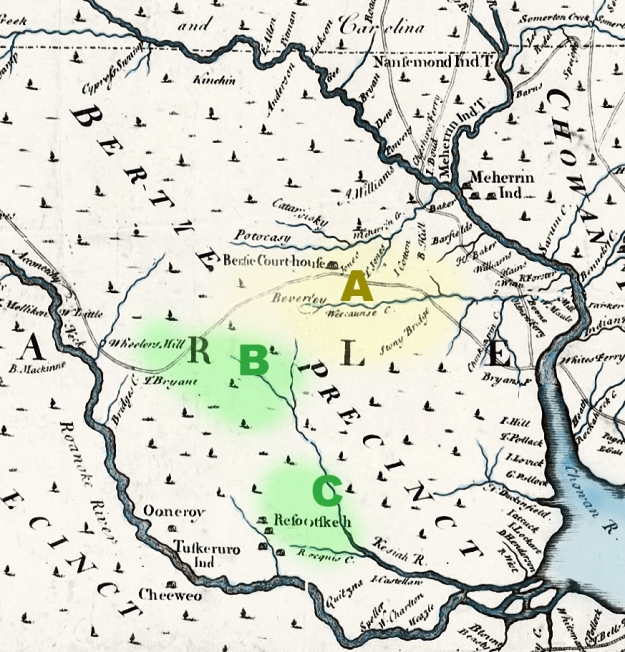 Over the months to come I’ll look more closely at land, court records and individual families in hopes of putting meat to the bones in this puzzling mystery of who we once were. At this point we have a large group of THOMAS with matching DNA from family descendants in Anson, Union, Stanly, Moore, Lee, Chatham Counties. We yet have any solid matches or even participants from other lines in Edgecombe, Bertie, or Northampton counties. If you are a THOMAS from the other lines, please get Y-tested and join us at the THOMAS familytreedna.com Group.  The Y-test tells you nothing about your percentages of makeup such as Irish vs Spanish etc. It is the tool we use in building paternal lines connecting us back through many generations. There’s also a Thomas FB Group set up as a place to advance discussion.
Please! …get in touch if you have any thoughts pertaining to our storyline. I can be reached at geothos @bellsouth.net

5 thoughts on “ROLLING OUT OF VIRGINIA”