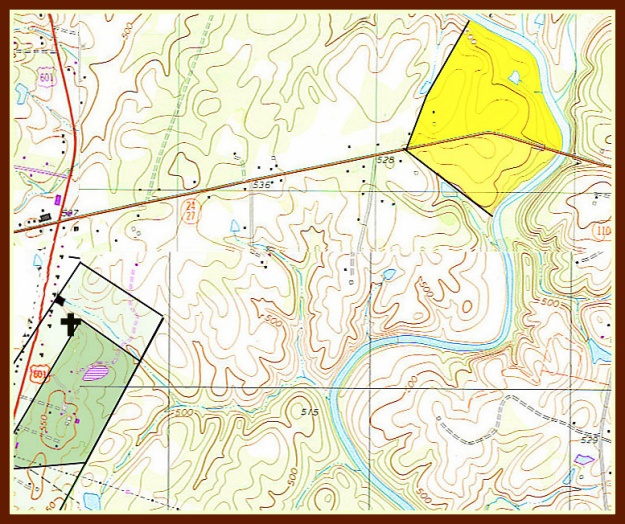 Dead Man’s Curve and Hell’s Half-Acre, and for many my age, there’s also fond memories of the bridge where Hwy 24/27 crosses Rocky River. I remember as a kid hanging my head out of the car to capture a glimpse of the flowing waters below. There was a large farmhouse, and we passed a single engine airplane and grass runway. My dad gauged the growing season as we drove by cornfields on the long descending curve. Raised in the city, this crossing over was an important part of my life. Not only did it carry me to my country cousins, it also introduced me to a whole other way of life.

In studying this area of southern Cabarrus County, I believe there’s a need to initiate a little online discussion into the lives of three particular settlers who lived oh so briefly near the present day Rocky River bridge. There’s Burdig Howell with lands not far from possible family member Joseph Howell. And in follow-up posts, I’d like to discuss Samuel Bonds who may have woven himself through the annals of Cabarrus and Anson before moving to SC. And finally, a person named Joseph Garrott just may provide new clues into a probable Garmon family member who escapes connection.

We know of Joseph Howell and of his land near the mouth of Anderson Creek (located north of our Rocky River bridge). Joseph’s mother is buried at Haynes Baptist meeting house not far up the hill from the bridge. The church is long gone though the cemetery is marked by a cross in the green shaded tract above. It’s curious that early on, Joseph also acquired land very close to present day Bethel UMC.

About the same time, a little known person by the name of Burdig Howell purchased 68 acres from Abner Nash and wife Justina (Deed 6-53, Mecklenburg NC, 5 Feb 1771). The tract is situated along the Rocky River and takes in the crossing of Hwy 24/27 (see above shaded in yellow). It’s close to Joseph Howell’s land and just downhill from the ancient site of Haynes meeting house. Was Burdig kin to Joseph Howell?   And, if so …how? 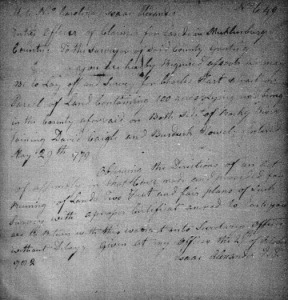 Over a decade later, on 27 Oct 1782,a warrant  (Grant 3510 Mecklenburg NC) issued to Charles Hart identifies adjoining landowners as David Caigle and “Burdick Howell.” Located a little further north, Charles Hart’s land was situated on both sides of Rocky River just above the lands of Joseph Howell. Within two years after being warranted, the survey for the land no longer mentioned Burdick Howell.   Was Burdg still local; where did he go? 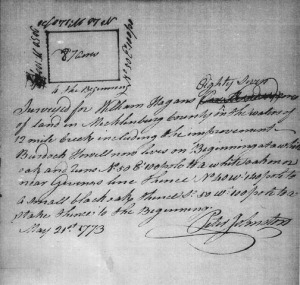 A year after being mentioned in Charles Hart’s land grant, Burdig shows up more than 20 miles to the south on Twelve Mile Creek. On 21 May 1773 (Grant 2632 Mecklenburg NC),  the survey for William Hagans describes a tract as being “on the waters of 12 mile creek including the improvement Burdick Howell now lives on.”

There’s no further mention of Burdig Howell. Working from the other end of his life story, descendants know him as Thomas Burdig Howell. Online discussions indicate that Burdig Howell removed from North Carolina and eventually settled around Greene and Hancock counties GA.

Later conveyances of the lands of Burdig Howell may add to the richness of early history while potentially opening the door to new family leads. The next post will cover land conveyances by Adam Garmon and Joseph Garrott.