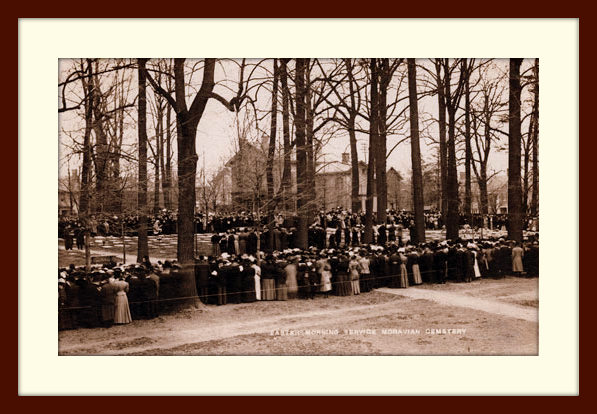 “At five o’clock the congregation gathered in the Saal, and after the usual greeting went into procession to God’s Acre. The weather was fine.”

I can hear the proclamation by horns, the singing of “Christ the Lord has Risen Today” and the quietness of believers solemnly making way to the burial ground. And though the resurrection of Christ is celebrated similarly across our country, this was not your normal Easter. On 12 April 1788, the above quote was entered into diary by a Moravian minister in North Carolina’s settlement known as Wachovia. The minister continues his entry with the following:

Twenty-three Methodist preachers passed through on Good Friday on their way to Mr. McKnight’s to hold a Church Meeting as they call their conference, and stopped today on their return trip. The meeting had been called by Mr. Coke, who recently came from England to make a visitation among the Methodists in North Carolina. During the meeting seven deacons were ordained. They say that in addition to this church order, which is the lowest, they have elders (presbyters) and bishops. Mr. Coke claims to be a bishop, and this is confirmed by Mr. Astley [Asbury], the leading preacher and superintendent among the Methodists here. From here Mr. Coke goes to Virginia, where he has called a meeting and will make a visitation; and he will continue his work through all the states as far as New England. The Methodists make such visitations here and there each year. 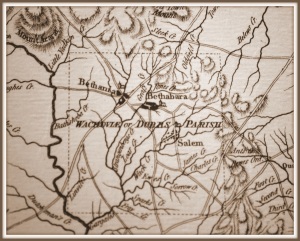 Believing they were about to be expelled from Germany, in 1754, the Moravian Sect under leadership of Von Zinnzenburg purchased 99,000 acres in western NC. Known as Wachau [Wachovia] in honor of the Wachua Valley of Austria, the land was subdivided amongst their own by way of church agent. Situated along the Indian Path that later became known as the Great Wagon Road from Pennsylvania, others, including Methodists, soon sought settlement on their tract. The Moravians were great keepers of diaries and other forms of social accounting. Much more about the growth of Methodism in our state can be gleaned by reading the volumes of Adelaide Fries’ Records of Moravians in North Carolina. 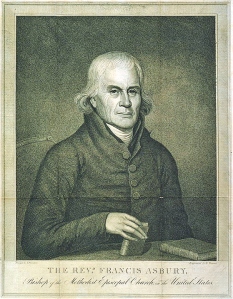 Another wonderful source for understanding our past can be found in the Journal of Francis Asbury. We Methodists know well of the founding leadership of John Wesley, but it really was Francis Asbury whose journeys across the back country solidified our ways of worship. In October of 1799, while passing through the western wilds of North Carolina, Asbury writes:

Friday 4. We rode twelve miles to Mrs. Campbell’s, upon the south fork of Haw River. We had to work our way through the woods. Saturday and Sunday, I attended quarterly meeting at Bethel, upon Belew’s Creek, where I ordained five deacons, and preached from 1 Tim. vi. 11, 12.: we had a gracious time. We have rode only twenty miles in two days. I lodged at M’Daniel’s.

Monday 7. We rode through Stokes County, and attended meeting at Love’s church, which has glass windows, and a yard fenced in. After Jesse Lee, I added a few words on Hebr. ii. 1. We then came up to William Jean’s, near the Moravian Old-town. We have rode nearly twenty miles this day. Sitting in meeting so many hours among such a multitude of people, and frequently with a blister on my breast, with the difficulties of driving along broken paths, cause me to be variously tried and comforted.

The study of history and genealogy is much akin the journeys of Francis Asbury. We push forward on a broken path of records alternatively encountering  times of delight and torment. The Moravian records, along with this entry by Asbury, provide a wonderful wellspring of information from which new posts will flow.

Though the church of James Love has been identified, his life on earth will soon after end. His closing chapter will lead us in new directions. Future writings  will explore family, friends, church, and even an incredible walk by a man named Moses.

1 thought on “Tried and Comforted”